As curators and historians in the new Smithsonian National Museum of African American History and Culture, a handful of Columbian College alumni have scoured the country to find the people and objects that tell the complex story of black life in America.
November 7, 2016 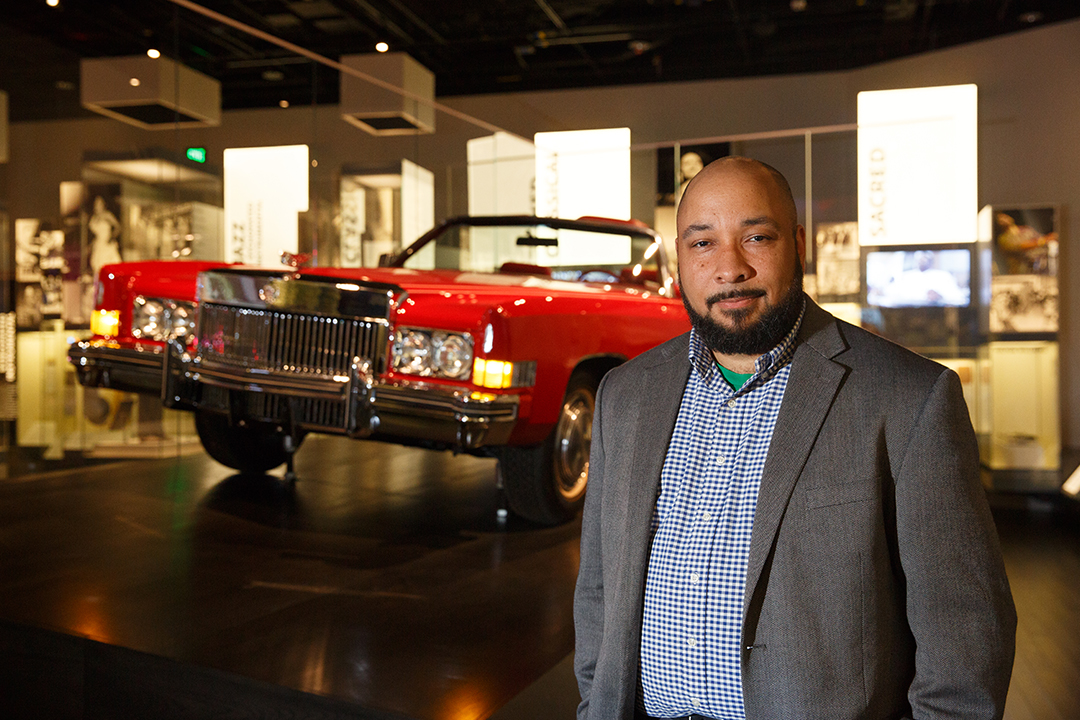 Among the 38,000 items on display at the new National Museum of African American History and Culture, the one that never fails to make Museum Specialist Kevin Strait, PhD ’10, smile is the one that almost didn’t make it there: Chuck Berry’s Cadillac.

For more than a decade before the Smithsonian museum’s gala grand opening in September, curators and historians like Strait—who holds a doctorate in American Studies from Columbian College —scoured the country for items to fill what would become the 400,000-square-foot building at Constitution Avenue and 14th Street. They were tasked with telling the story of African American history through a collection that represented both tragedies and celebrations, from slave shackles and a segregation-era railway car to Jackie Robinson’s jersey and Prince's tambourine.

To Strait, who specializes in musical history, the story of African American culture would be incomplete without Berry’s candy-apple red 1973 Eldorado. It is the car that the rock and roll legend famously drove on to the stage of St. Louis’ Fox Theater, a venue that turned him away as a child because of the color of his skin. Strait grew up listening to his father’s Berry records, charged with high-octane lyrics about drag racing and staying out late.

“Chuck Berry’s music reflected yearnings of freedom for folks like my dad,” Strait said. “The Cadillac symbolized the open road and possibilities for people who had been denied them.”

In 2011, Strait arrived at Berry’s Missouri estate to meet his father’s idol and collect the donated car. But his heart sunk at the music icon’s greeting. “He shook my hand, looked me dead in the eye and said, ‘You know I’m not giving you that Cadillac, right?’”

For Strait—one of a handful of Columbian College alumni serving as curators, designers and specialists at the museum—the Cadillac snag was just another speed bump in the monumental mission of starting a new museum from scratch. “Typically a museum curator’s job is to steward a collection that already exists,” said Paul Gardullo, PhD ’06, curator at the African American museum. “That is not what people like [Strait] and I have been doing for the better part of 10 years. When we got here, there was no building, no collection and no concepts for the exhibitions. We were thrown right into the deep end.” 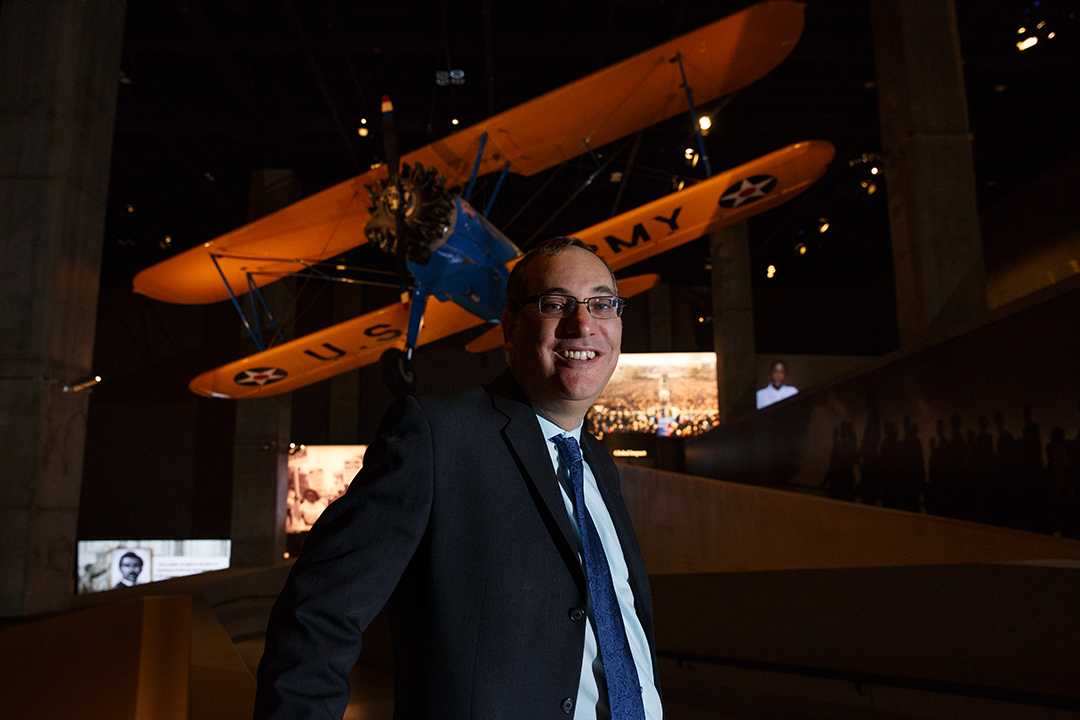 While searching for museum items, Strait and Gardullo—who also holds his doctorate in American Studies—say they’ve logged more than 100,000 miles traveling to nearly every state, along with several trips to Africa. They’ve forged relationships with donors who’ve contributed funds and famous historical artifacts and with ordinary people who have lent family heirlooms. “It’s a process of making friends and getting people to entrust us with objects that hold an important place in their lives,” Gardullo said. “We put in the physical miles. But we also put in the emotional miles, the people miles.”

What sets the Smithsonian apart from other kinds of storytelling, Gates Moresi said, is "it’s the real thing—the authentic thing—the original things that are associated with all those historical events and cultural moments that were so important to us, and that we celebrate,” Gates Moresi said.

Strait’s search for an authentic item seemed to stall in Chuck Berry’s driveway. The singer insisted that his cherished Cadillac would not make the trip to Washington. After hours of chatting with Berry about their mutual admiration for Miles Davis, the musician finally relented and agreed to donate his Cadillac. He even threw in one of his favorite guitars—nicknamed “Maybelline”—as part of the donation. The two sealed the deal over ice cream sandwiches.

But Strait’s celebration didn’t last long. The Cadillac’s tires were flat and the shipping truck scheduled to tow it broke down. For two hours, Strait pushed the two-and-a-half-ton car 50 yards to load it into an 18-wheeler that would eventually cart it to D.C.

“In this job, you have to be prepared for anything—whether it’s negotiating or horse-trading or even a little elbow grease,” Strait laughed.

While Gardullo came to GW intent on pursuing a museum curatorship career, he credits his American studies classes with teaching him to “look at culture and history from a variety of complex angles,” incorporating disciplines like literature and anthropology.

It’s a skill that has served him well at the new museum, which emphasizes African American narratives from different perspectives. The museum attempts to present a complete reflection of black history—one that not only relies on subjects like slavery and the fight for civil rights, but also delves into more intimate stories.

“There are certain baseline stories that must be told through polestar objects,” Gardullo explained, pointing to exhibits such as Emmett Till’s casket, a bill of sale for a 16-year-old girl and a slave cabin from a plantation in South Carolina. Gardullo worked with GW Associate Professor of Anthropology Stephen Lubkemann and researcher Justine Benanty, BA ’09, MA ’10, on a display of artifacts Lubkemann and his colleagues recovered from a sunken Portuguese slave ship through the Slave Wrecks Project. At the same time, the museum curators were also looking for more personal stories that, Gardullo said, “portray the diversity of African American life across a big geographic landscape in a relatable, human scale.”

Both types of stories—the historical landmarks and the intimate tales—have touched the lives of Gardullo and other curators. In Tulsa, Okla., Gardullo met with 80-year-old George Monroe, whose father’s skating rink was destroyed in a 1921 race riot when white mobs slaughtered 300 black people and burned much of the city to the ground. Just 5-years-old at the time, Monroe prowled the streets for days after the destruction, collecting pennies off Tulsa's scarred sidewalks. “These charred tiny pennies become incredibly important talismans for passing on his story,” Gardullo said. Monroe gave the pennies to Gardullo in memory of his father.

Gardullo also shared a personal connection with one of the better known chapters in black history. When researching the story of the Tuskegee Airmen, the African American pilots who fought in World War II, Gardullo located the squadron’s original Red Tail training plane. Not only did the plane’s owner agree to donate the prized artifact to the museum—he also took Gardullo for a ride in it.  Circling over Moton Field, the Alabama camp where the airmen were based, the pilot shouted to Gardullo, “Do you want to take the controls?”

“My heart was beating wildly,” Gardullo said. “When I took that control stick in my hand and started flying the plane, I thought about the men who sat in that cockpit and served their country in a time when their country wasn’t serving them.

“It’s our job to make this big beautiful museum a worthy home for items as big as that plane and as small as those pennies.”