Silenced By the Sea

For centuries, the legacy of sunken slave ships has been lost at the bottom of the ocean. Now, a historic collaboration between GW, the Smithsonian, IZIKO (Museums of South Africa), and the U.S. Park Service are raising these stories from the deep.
April 2, 2014 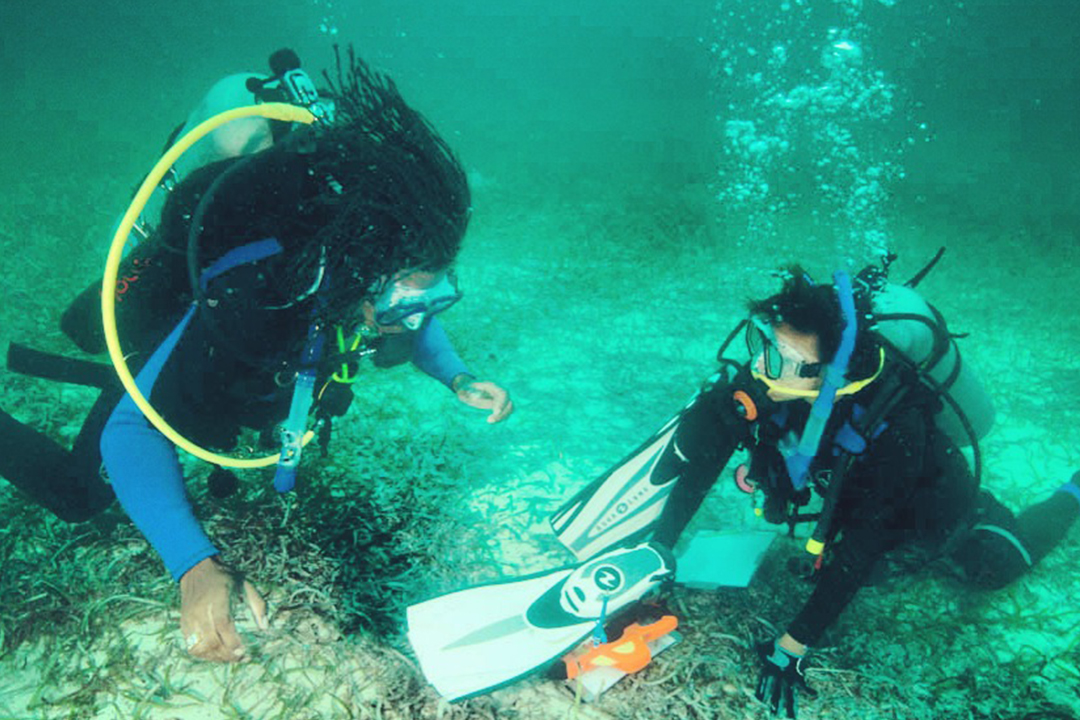 They set sail from ports of call like El Mina, Mozambique, and Madagascar—mighty wooden ships, over 100-feet long, some weighing 500 tons. From West Africa they followed the trade winds and from East Africa they rounded the Cape of Good Hope, charting a course across the Atlantic for the New World. Their cargo was priceless and horrific: hundreds of African slaves.

From the 17th to the 19th centuries, many of the 12 million Africans who arrived in America followed these tragic routes. Packed in squalid hulls, they suffered the agony of enslavement, from the whips of ship captains to near starvation-level food rations. When they reached their destination, most faced a lifetime in chains.

But many never made it that far. In turbulent waters along the African coast or surprised by gales in the Caribbean, the ships were buffeted by fierce winds and engulfed by 50-foot waves. Their wooden hulls shattered against jagged rocks. At least 600 slave ships with names like Our Lady of Mercies, The Meermin, and L’Auorore wrecked along their voyage. The ships, the crew, and the human cargo were lost—thousands of voices silenced on the ocean floor.

Fast forward 200 years. The ships’ remains are still hidden under the surf and sand but, perhaps, not for long. Stephen Lubkemann, associate professor of anthropology, and Paul Gardullo, museum curator at the Smithsonian’s National Museum of African American History and Culture, are part of an international research team that have set out to locate, document, and secure the unique—and increasingly threatened—archaeological remains related to the maritime aspects of the slave trade. Called the Slave Wreck Project, the underwater effort also involves a surface-education component to assist countries like South Africa and Mozambique in creating their own cultural resource management programs.

“The artifacts we find underwater are a powerful means of reaching out and touching the past,” said Lubkemann, who, in addition to his research work, has participated as a diver in the project. “They commemorate the millions of people forced on to these ships. They give voice to the voiceless.”

Launched several years ago with funding from the Ford Foundation and in collaboration with co-founder Jaco Boshoff of IZIKO (Museums of South Africa), the slave wreck project was infused with additional support in 2011 from the GW–Smithsonian Opportunity Fund. Other organizations involved in the maritime excursion are the South African Heritage Resources Agency, the National Association of Black Scuba Divers, and the U.S. National Parks Service-Submerged Resources Center.

Recently, at a 30-foot-deep site off the southern Africa coast, an iron ballast was discovered by Boshoff laying across a reef under layers of sand and surging currents. The ships used these ballasts to balance the weight of their slave cargo. While research is still underway, there is a distinct possibility that the ballast may be from a Portuguese ship that sunk at the turn of the 18th century with over 400 slaves aboard.

“As we document these ties, we bring out the stories of Africans that were captured, put in horrific conditions within the bowels of the ships, and, ultimately, ended up in the catastrophe of a shipwreck,” said Kamau Sadiki, vice-president of the National Association of Black Scuba Divers. “To find a tangible artifact, something to raise their silent voices, is an extraordinary thing.”

The sea may have claimed hundreds of slave ships, but no one—from maritime archeologists to treasure hunters to weekend scuba hobbyists—has ever discovered the vessels that foundered while slaves were onboard. “It’s a big ocean out there,” said archeology and anthropology alumna Justine Benanty, BA’09, MA ’10, an associate researcher on the project, “and ships wreck in places that are as difficult to work in as they were to navigate.” Benanty had never participated in a dive before joining the project. A veteran of land excavations, she quickly became a maritime convert. “I wouldn’t trade a ‘dive’ for a ‘dig’ now,” she said. “Why would I want to get sweaty and dusty at a land site when I could ride the waves?”

Still, locating a shipwreck is an arduous process, one that requires equal parts archival detective work, technological savvy, and underwater skills. For every hour in the ocean, hundreds of hours are spent combing through archival records. The project’s researchers have logged hundreds of hours at libraries and archives from North and South America to Europe and Africa and spent months thumbing through digital documents, microfiched ship logs, and crumbling parchment maps.

But archival records can only advance the search so far. Rarely, Lubkemann noted, is a shipwreck account specific enough to pinpoint an exact dive-spot. The next step is old-fashioned legwork. The additional support from the GW-Smithsonian Opportunity Fund enabled Boshoff, Lubkemann, and their partners to focus on the southern African location and gather clues from the local maritime community. They interviewed fishermen who snagged their nets on planks and swimmers who spotted shadows in the sand. They also gained access to state-of-the-art technology, such as a magnetometry tool to detect metallic remains.

“We get a blip and we go down to check it out,” Benanty said. “It could be a shipwreck. Or it could be a lobster trap.”

Unlike land archeological sites, where relics may have spent thousands of years baking under desert suns, shipwreck ruins are largely preserved by the sea. Human activity poses the greatest threat to underwater artifacts. Sport divers and coastal developers often unwittingly disturb potential maritime finds. Worst of all are professional treasure hunters who pillage historical sites in search of sunken gold. “They will dynamite a wreck right out of the water in search of a few coins and, in the process, obliterate submerged cultural resources,” Lubkemann said.

The international team of maritime archeologists will continue to scour the waters around the southern tip of Africa for additional clues on the sunken slave ships. The goal is to eventually uncover artifacts from all of the major maritime slave routes, including the East African, Trans-Atlantic, and the often-overlooked internal American slave trade. The team plans to expand its search to the Virgin Islands, Cuba, Senegal, and possibly even East Coast ports like Annapolis, Baltimore, and Alexandria. Meanwhile, they are also involved in the training of the next generation of maritime archeologists from GW and other U.S. and African schools.

“This is a relatively young field and it’s exciting to see more and more students in the water,” Lubkemann said. “I look at this as the intersection between anthropology and history—with a lot of hard work and little bit of adventure thrown in.”