Luther Rice-winning neuroscience major Mohammed Almarkhan is researching the link between autism and dementia. His results may improve the lives of millions—including his own sister.
November 9, 2022 - 10:10 AM 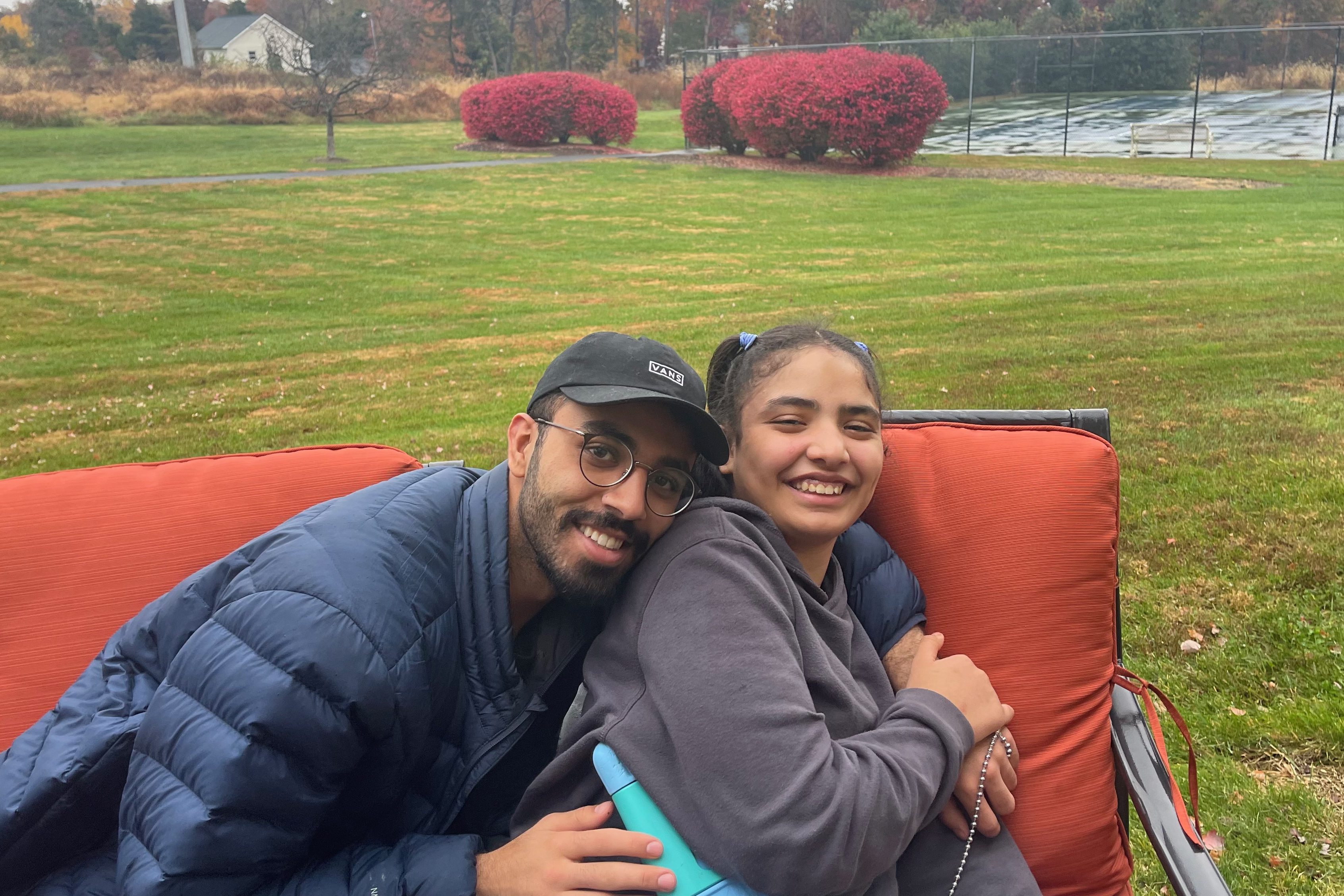 Neuroscience major Mohammed Almarkhan, a senior and Luther Rice Fellow in the Columbian College of Arts and Sciences (CCAS), remembers his sister Larin as a lively toddler, brightening his family’s days when they lived in Saudi Arabia.

But by the time she turned two, Almarkhan began to see his sister change. She stopped making eye contact and calling him by his name. She isolated herself, playing with her toys alone in a corner. By three, she had regressed so much that she lost her speech. Eventually, she was diagnosed with severe level-3 autism spectrum disorder (ASD), a revelation that provided some answers for his family—but also left Almarkhan with more questions.

“How does this happen to a beautiful, perfect child?” he still asks himself about Larin, who is now 13. “What kind of life is she going to have?”

Almarkhan and his family moved to the United States eight years ago in part to have greater access to treatments and therapy. In that time, Almarkhan said his sister has improved. She’s able to change her clothes by herself, for example, and the family continues to guide her toward a more independent life.

But Almarkhan is still asking questions about both the cause of ASD and what can be done to improve the quality of life for people like Larin. His search for answers led him to CCAS Assistant Professor of Speech, Language and Hearing Sciences Gregory Wallace, whose research focuses on brain development of individuals with ASD and how the disorder affects their daily lives.

As an assistant in Wallace’s lab, Almarkhan is investigating an increased dementia risk among people with ASD and other intellectual disabilities. Selected to receive a Luther Rice Fellowship—a CCAS program that supports faculty-mentored student research—Almarkhan hopes his work will have long-term implications for his sister and the one-in-44 U.S. children diagnosed with some form of ASD each year.

“I went into this research asking myself, ‘What can I do to improve the future of autistic kids?’ That’s a scientific question. But it’s also a personal one,” Almarkhan said.

While evidence has linked ASD to an elevated risk of dementia—at least five times higher than the general population of 30- to 64-year-olds—there have been few follow-up studies focused on the challenges of dementia symptoms on people who are already struggling with performing daily life tasks.

“Our knowledge of cognitive aging among autistic adults is very limited,” Wallace noted. “If autistic adults, particularly those with co-occurring intellectual disability, experience increased risk for developing dementia, our research will have important public health implications. It could elevate the importance of developing clinical tools and methods to better screen, prevent and treat dementia among autistic adults.”

Looking to fill both the knowledge and life-impact gaps, Almarkhan’s Luther Rice project—titled “Dementia Risk and Its Functional in Adults with Autism with Intellectual Disability During Middle and Older Adulthood”—looks at dependent people with ASD who rely on caregivers for daily needs like dressing, cooking and banking.

Together, the combined data should provide a clearer picture of not just the degree of elevated dementia risk for people with ASD, but also whether they experience more adverse impacts than the general population.

Almarkhan stressed that while other important research projects are searching for the cause of the raised dementia risk, his relational study is aimed at bringing immediate relief to people currently suffering from the twin disorders of dementia and ASD. “My goal is to make their lives better right now,” he said. Indeed, while he hopes his findings will have direct clinical implications—including improved screening and detection—he also wants it to serve as the foundation for strategies that keep dementia from hindering people with ASD in areas like independence and employment potential.

In addition to publishing his work in a peer review journal, Almarkhan hopes to present it at both the GW Research Showcase and the annual meeting of the International Society for Autism Research in Sweden this spring. Among his many activities, Almarkhan works as a medical assistant in a Virginia doctor’s office. He is also the president and founder of the Autism Research Club at GW, a new campus organization that aims to educate the public on ASD and raise research funds. He plans to pursue his ASD research after graduation while attending medical school next year. “This is important to me. I want to finish the job,” he said.

At his family’s Centreville, Va., home, Almarkhan continues to help his parents care for his sister Larin. He envisions her eventually living independently and hopes his work can keep factors like dementia from getting in her way. “I think about how, for people like her who have come so far, dementia could wipe out the gains they have made,” he said. “I’m trying to do something about that.”