From Hurricane Maria to the COVID crisis, Puerto Rico’s tragedies have been compounded by widespread lack of access to clean water. TSPPPA student Omar Negron-Ocasio has a business plan to change that.
October 6, 2020 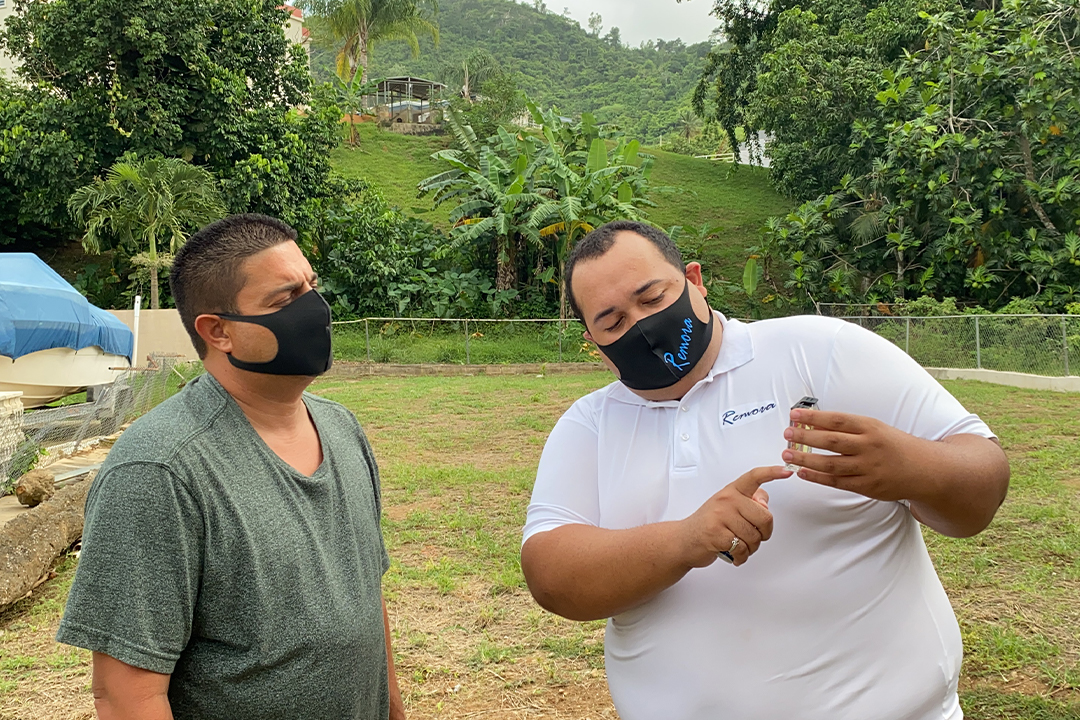 Omar Negron-Ocasio, a graduate student in Columbian College’s Trachtenberg School of Public Policy and Public Administration (TSPPPA), saw his community of Corozal in central Puerto Rico ripped apart when Hurricane Maria swept through the island in 2017. Like so many of Puerto Rico’s 3 million inhabitants, his family lost their home to the storm and the community’s infrastructure—including access to clean water—was severely compromised.

Access to clean water is always tenuous in Puerto Rico. More than 70 percent of the island is served by water that violates health standards. But the hurricane made a bad situation critically worse. Even today, more than 200 communities do not have access to clean water, including Corozal where many have resorted to collecting spring water to survive. Now, with the island struggling against the COVID-19 pandemic—Puerto Rico has seen nearly 50,000 cases, 700 deaths and an average of about 200 new cases each day—the lack of clean water for handwashing adds another threat to the beleaguered population.

Seeing the need for a long-term, sustainable solution to the island’s ongoing water crisis, Negron-Ocasio launched a company called Remora. Collaborating with friends and fellow students, his plan was to addresses access to clean water in vulnerable communities like Corozal, while also training people to manage the region’s water filtration systems and protect its water sources. Backed by corporate partners, including T-Mobile and the Ford Motor Company, Remora has created a system that filters water from local sources and transports it to communities.

“I had an idea for a machine that takes water directly from the water source—whether that is a river, lake or stream—and  it make it safe to drink,” Negron-Ocasio said. “And we adapted it so people can use it right in their home faucets, which has implications for keeping them safe during the COVID crisis.”

Negron-Ocasio was one of five GW students selected as Clinton Global Initiative University COVID-19 Student Action Fund recipients for their innovative ideas to address aspects of the pandemic. Like the other student-led projects, he will receive a grant for as much as $5,000 to help finance his initiative.

Negron-Ocasio, who will continue serving as Remora’s CEO while studying public administration at TSPPPA, said the company’s goal is to deploy at least one machine in the 200 communities without access to local water systems. So far, they’ve installed five community systems and five individual units—called Remora-Home—that filter water directly from faucets. He has also talked to officials in Haiti and Mexico about implementing the system overseas.

By filtering chemicals, microplastics and other biohazards from water sources, the Remora system also plays a role in improving environmental conditions and reducing pollution in communities. “We have created something that can clean the water source, protect biodiversity and improve water quality in general,” he said.

Negron-Ocasio assembled his team of business, engineering and public health colleagues just weeks after Hurricane Maria hit—once cell service was restored and he was able to contact fellow students. Together they designed the filtration devices and marketed them to government agencies, nonprofits and corporate partners. In addition to helping building the system, Remora’s partners have invested in educational programs to help people learn about safe water usage. They are also training and paying community members to construct the devices independently.

“For companies, we cover a lot of social corporate responsibility issues. There’s an educational component and we provide income for communities,” Negron-Ocasio said. “But our business model remains focused on communities as the end users. They can build the machines, use the machines and improve their own lives.”