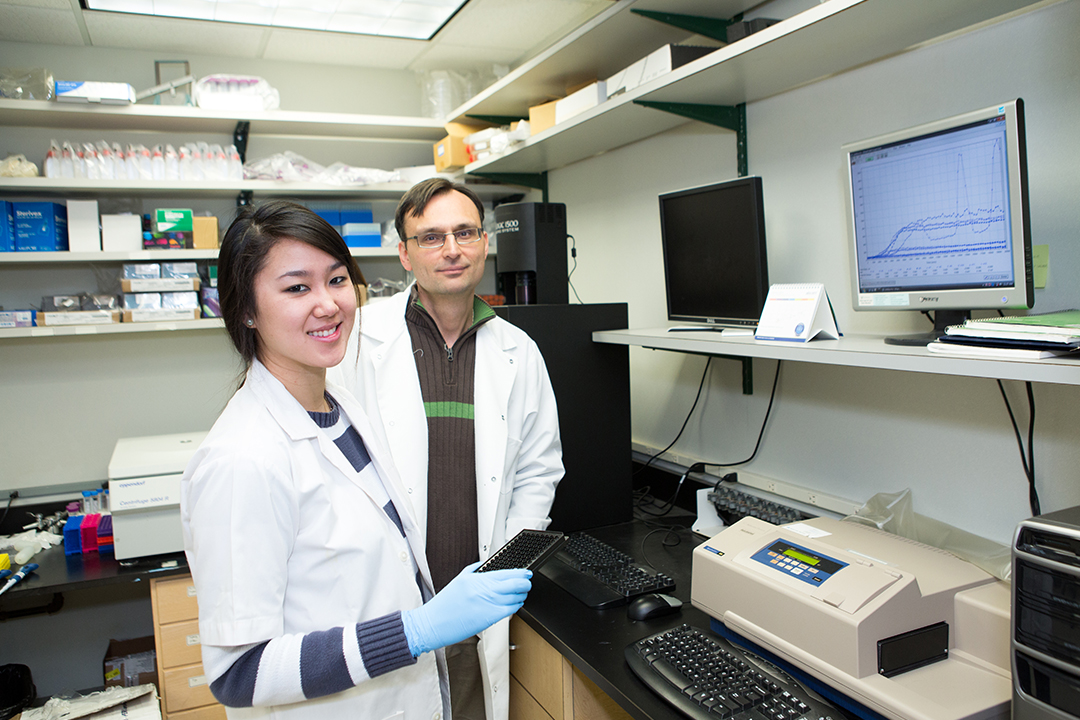 For Emmeline Ha, a science lab can be home to invigorating discoveries—but also frustrating failures. Spend enough time in a white lab coat, the senior chemistry major will tell you, and you’re bound to have more setbacks than successes. Maybe a sample’s pH levels are off-kilter. Or its chemical concentrations aren’t right. Maybe a test tube solution will begin to smolder for no apparent reason.

“Discoveries don’t happen easily. Maybe once every 50 tries, you get something right,” Ha said. “It’s not as simple as people think.”

So when an experiment actually goes as planned, it can seem like nothing short of a scientific miracle. It’s a feeling Ha knows well: After sacrificing weekends and summers to explore a protein called amylin and its link to diabetes, she is reaping the rewards of four years and more than 1,000 hours in the lab.

“What Emmeline has accomplished would be impressive for a graduate student, let alone an undergraduate,” said Aleksandar Jeremic, associate professor of biological sciences and Ha’s Luther Rice faculty mentor. “You don’t often see students with her kind of commitment, seriousness, and technical expertise. She belongs to the elite.”

But amylin can aggregate—essentially “clump up,” as Ha puts it—on pancreatic cells. The amylin clusters block the cells from releasing needed insulin and prevent the amylin hormone itself from regulating the amount of glucose in the blood. Such amylin aggregates are believed to be a leading factor in the evolution of diabetes. But exactly how to combat the amylin “clumps” has remained a scientific mystery.

Ha struggled to crack amylin’s clustering code, but each pitfall and false start was met with more frustration. At one point, she was forced to abandon a year’s worth of work when an experimental approach failed to yield useful results.

“That’s science. Sometimes you have to turn around and head off in a new direction,” she said. “You follow the research wherever it takes you.”

Finally, almost on a whim, Ha played a hunch. Knowing that copper levels are elevated in people with diabetes, Ha mixed the metal into her amylin samples. “It was practically accidental,” she recounted. “It really was a case of, well, let’s try this and see what happens.”

Ha’s last-resort experiment produced immediate results. In her published findings, she reported that the copper lessened the degree of amylin “clumping,” which could lead to a new understanding of the causes and treatments of diabetes. Her findings could also impact other diseases linked to protein aggregation, such as Alzheimer’s and Parkinson’s.

Jeremic characterized Ha’s work as “instrumental” to his current research on amylin toxicity, part of a $1.3-million study funded by the National Institutes of Health and the National Institute of Diabetes and Digestive and Kidney Diseases. “It is amazing to see a student’s transformation from a very talented undergraduate to someone who has fulfilled her expectations and become a true scientist,” he said.

After taking introductory science courses taught by biology Professor Robert Donaldson, Ha chose a chemistry major with a biochemistry track to prepare for cross-disciplinary research. Her amylin project has taken her from Donaldson’s guidance classroom to Jeremic's biology lab to Professor of Chemistry Akos Vertes’s mass spectrometry technology instrument, a vital tool to understanding the interactions between copper and the hormone amylin.

“For me, there’s no doubt that interdisciplinary science and collaboration foster great discoveries,” she said. “I don’t think you can find answers on your own. You have to build on other peoples’ work. I’m lucky that I’ve had [those] three great teachers for this project.”

The daughter of Vietnamese immigrants, Ha is the vice-president of the GWU Vietnamese Student Association. She plans to attend medical school and has twice joined nonprofit relief missions to transport medical supplies to impoverished farmers near the Mekong Delta. The trips have inspired her to close the gap between her work in the lab and its impact on the ground.

“In rural areas of Vietnam, people aren’t educated on diabetes at all,” said Ha. “They aren’t even aware of sugar levels and how they affect us. That’s why I want to be a physician. I want to build bridges over those barriers.”