In collaboration with the Peace Studies Program, GW debaters traveled to Colombia, where they teamed up with students from a Bogotá university on an intercultural exchange.
December 10, 2019 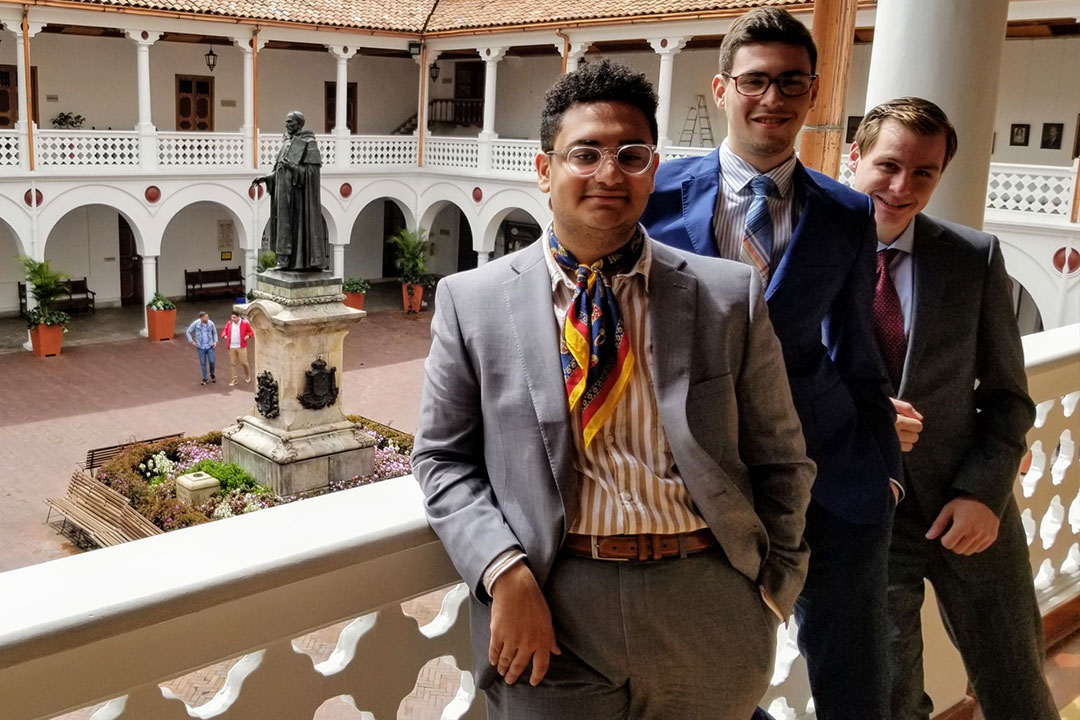 As part of a collaboration between Columbian College’s Peace Studies Program and the GWU Debate & Literary Society, 25 students participated in online engagements with Colombian university students and three traveled to Colombia this fall to test their communications skills in a multi-university, multilingual international debate forum. Dubbed “What We Owe,” the project was organized through a partnership with INCIDE, a Colombian nonprofit that promotes civil dialogue as a tool for conflict resolution.

“The experience really changed me,” Darwish said. “Debating alongside Colombian students, especially in a different language, humbled me and compelled me to understand how different our lives have been—although we live only a five-hour flight apart.”

At competition’s end, Wainer ranked as the top U.S. debater and advanced to the tournament finals with his Colombian partner. The two Colombian finalists—including the competition’s winner—will travel to GW in early 2020 for student dialogue sessions on peace studies and conflict resolution.

“This project created an online and in-person platform for meaningful, intercultural engagement between GW and Colombian students on issues of enormous importance to Colombia’s future” said GW Director of Debate Paul S. Hayes. “I’m certain the students will remember the experience fondly for the rest of their lives.”

According to Derek Malone-France—peace studies director and associate professor of religion, philosophy and writing—over 20 students from the Peace Studies Program contributed to the project via online engagement and by developing debate topics, producing research and providing critiques. This included watching, discussing and writing about the online debates between the U.S. and Colombian students as case studies on intercultural communication and peace building. The students, Malone-France noted, “had a profound experience of cultural interaction” during the course of the project. “They were genuinely affected by our readings on Colombia's history and culture in the classroom, and they became personally attached to both the GW debaters and the Colombian students.”

Since taking over the Debate & Literary Society in 2012, Hayes has refocused the society from pursuing speech and debate as  purely “academic sports” to using professional and civic communication as tools for engagement, service and scholarship. With over 100 GW students participating in speech and debate events each year, Hayes stresses the development of special intercultural projects as complements to traditional speech and debate training. Some of these events have included an annual debate series organized in partnership with the Embassy of France to the United States as well as MyFITE, an international advocacy competition organized in partnership with the Indonesian Ministry of Tourism to support Indonesian students advocating sustainable tourism solutions for their local communities. In recent years, GW debaters have also participated in events sponsored by NASA, the Policy Studies Institute and the Embassies of Germany, Rwanda and South Africa.

“Columbian College has been at the forefront of debate in America since the early 1800s,” said Hayes, noting that the debate society was created in 1822, shortly after the college’s founding. “Our society is a national leader—if not a global leader—in designing, organizing and administering speech, debate and communications projects emphasizing engagement, service and scholarship.”

In this latest project, both Hayes and Malone-France saw an opportunity to forge a meaningful dialogue between American and Colombian students on the challenges of peacebuilding. Colombia has a troubled history of conflict. A 2016 accord ended a half-century of fighting between the government and the leftist Revolutionary Armed Forces of Colombia, or FARC. The fighting killed 220,000 Colombians and displaced more than 7 million people. The fragile peace process was further jeopardized by the 2018 election of President Iván Duque, among the accord’s leading opponents. In November, hundreds of thousands of Colombians staged nationwide protests, with renewed peace negotiations among their demands.

“Given its tragic history and the complexity of the peace-building process there, Colombia represents precisely the sort of challenging real-world context with which students in our program need to engage,” Malone-France said. The project has drawn praise from the United States Embassy in Bogotá, where it was lauded for “potential contributions towards productively engaging future Colombian leaders in topics of civil society building and security,” according to Embassy Press Officer Kaitlin Turck.

For the student debaters, the project was a forum for honing their skills while making international connections. None of the three debaters had traveled to Colombia before—Darwish mistakenly believed at first that the competition would be held at New York’s Columbia University—and each forged friendships with their Colombian counterparts. The teams toured sites from the Botero Museum to Bogotá’s famous open air markets. And the multilingual debates enabled the American students to address peacebuilding issues from the Colombian perspective.

“Debating in both Spanish and English challenged me to think in new ways,” O’Neil said. “I learned a great deal about the cultural depth of the country, and the nuanced positions surrounding the Colombian conflict. The skills I’ve taken from this project will certainly help me in the future.”