From the sidewalks of the Science and Engineering Hall to the reaches of the sun, J. Houston Miller’s new NASA telescope can measure greenhouse gases in earth’s atmosphere—and may transform climate science.
May 9, 2019 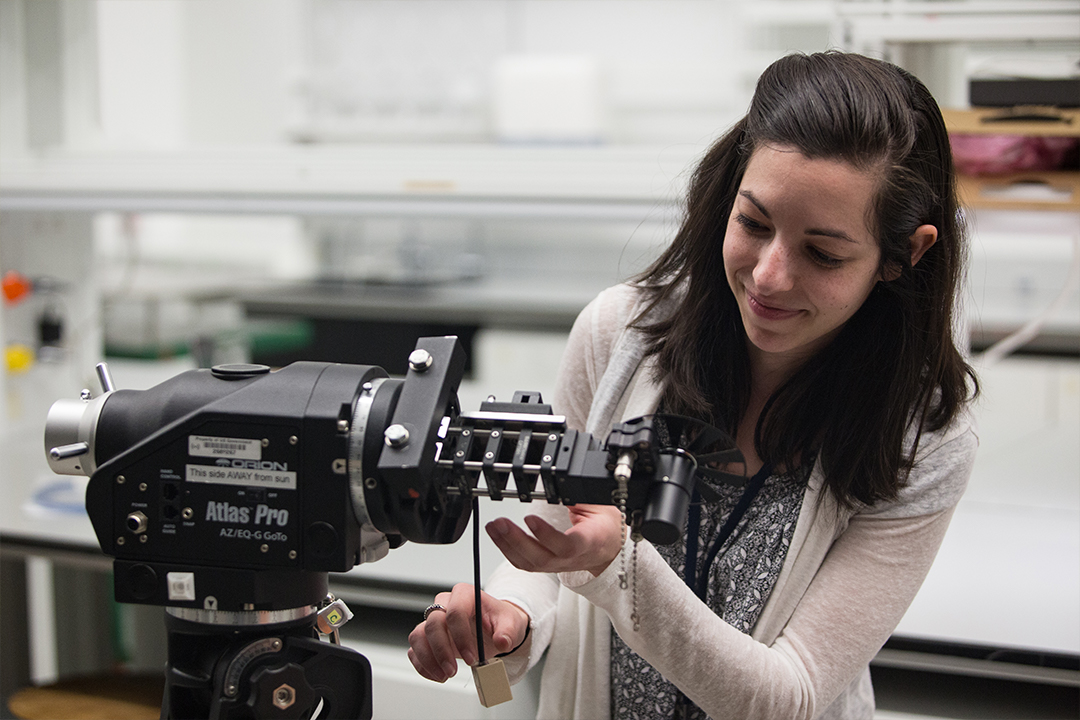 On the south side of Science and Engineering Hall, students hurrying along H Street are accustomed to dodging traffic and food trucks on their way to class. But on recent sunny days, some have paused to stare at second-year chemistry PhD student Monica Flores as she wheels what looks like a giant camera on a tripod to the sidewalk. Trailing a tangle of fiber optic cables behind her, she attaches the instrument to a laptop. Then she points it directly at the sun.

“I get a lot of funny looks out here,” Flores laughed. “People are like, ‘What is that thing?’”

It may not look like much, but the 100-plus pound device is a telescope—of sorts. It’s a one-of-a-kind machine gifted to Professor of Chemistry J. Houston Miller by the NASA Goddard Space Flight Center. And while it’s not much use for star gazers, it takes ultra-precise measurements of greenhouse gases in the atmosphere. From her perch near the corner of 22nd Street, Flores, a research assistant in Miller’s lab, has collected data on carbon dioxide concentrations, and plans to use future versions of the telescope to measure water and methane. The instrument is paving the way for interdisciplinary partnerships and projects that could bring about groundbreaking innovations in climate modeling.

“This is a remarkable instrument. It’s the only device of its kind in the world—and we’ve got it!” Miller said.

Miller is “in the greenhouse gas business,” he says. For more than 20 years, he has used an assortment of sensors and lasers—many of his own design—to track  harmful pollutants in the air and earth. Last year, Miller had just completed a major NASA project measuring melting permafrost in Alaska when the space agency approached him with an offer he couldn’t refuse. NASA’s Jet Propulsion Laboratory had commissioned a major new instrument called a laser heterodyne radiometer (LHR)—in essence, a “telescope” that takes greenhouse gas readings directly from the sun. The system was eventually housed at the Goddard Center where a NASA scientist and former GW doctoral student of Miller’s realized the LHR would fit perfectly with his research. She called her former professor and asked if he wanted to take it for a spin.

“They knew me and my lab. They knew GW has a stake in the greenhouse gas measurement game and we knew how to use the technology,” Miller said. “I very enthusiastically said ‘Yes! We’ll take it!’”

By pointing the LHR at the sun, researchers in Miller’s lab can record concentrations of greenhouse gases in a vertical column throughout the atmosphere. Horizontal measurement devices—including the permafrost laser Miller invented for his Alaska project—detect ground-level gases, like pollutants from automobile emissions. Vertical data provides a more complete environmental picture of gases rising and mixing around the planet. In the past, scientists have relied on satellites for vertical measurements, but they have limitations. Satellites report average concentrations throughout the atmosphere; Miller’s method—vertical profiling—hopes to provide concentrations as a function of altitude.

“It’s important to understand in precise detail what’s happening in all of the atmosphere,” Flores said. “The more measurements you have, the more data you can piece together to draw a better climate model.”

Science in action: From its perch outside SEH, the telescope connects to a laptop and power source to collect data from the sun.

Carbon dioxide has long been considered the largest climate threat—it accounts for more than 80 percent of all greenhouse gas emissions—but, per molecule, methane is even more potent. Emitted during the production of coal, natural gas and oil, as well as from agricultural sources, methane makes up 10 percent of gas emissions. But it traps atmospheric heat 87 times more effectively than CO2. Once it dissipates into the atmosphere, methane naturally turns into CO2, exacerbating the climate threat.

Miller’s telescope is equally efficient at tracking CO2 and methane levels. Its optical fibers collect light from the sun. Then, in the same way an FM radio reads different frequencies, lasers filter the sunlight into single molecules—such as CO2 or methane. Like turning the radio dial between stations, changing the laser lets the telescope “tune in” to different molecules.

Flores, an atmospheric chemistry specialist who recently won a prestigious ARCS Foundation Fellowship, was tapped as the telescope’s “champion,” Miller said, from the moment the box arrived at his SEH lab last summer.

“It’s extremely exciting to have first dibs on this technology,” Flores said. From an alcove just off the sidewalk, she aims the telescope at the sun and lets the device do the rest. A built-in heliostat continually optimizes the amount of light collected as it follows the sun across the sky. “Its autonomous sun-tracking capability is one of the least sophisticated and most elegant things about it,” Miller noted.

Still, the device has its limitations. It works best during peak sun hours and must be positioned away from the shade. “This is a blue sky instrument,” Miller said. He imagines himself one day mounting it on the back of his pickup truck and following bright spots throughout the city. The LHR is also inoperable at night or in bad weather. “The rainy days we’ve had this year have really held back our progress,” Flores noted.

Miller has big plans for his new device beyond the SEH sidewalk. He’s collaborating with Associate Professor of Biology Amy Zanne to take both carbon atmospheric and soil measurements at the Smithsonian Environmental Research Center. And along with LHR manufacturer Mesa Photonics, he is in the early stages of a United States Department of Energy project that will tune the telescope to detect water vapor, a significant heat-trapping greenhouse gas. In the long term, he envisions a network of miniaturized LHRs around the globe, relaying information on everything from carbon in the Arctic stratosphere to tropical storm surges in the Pacific. As far as the telescope’s potential goes, Miller suggested, the sky is literally the limit.