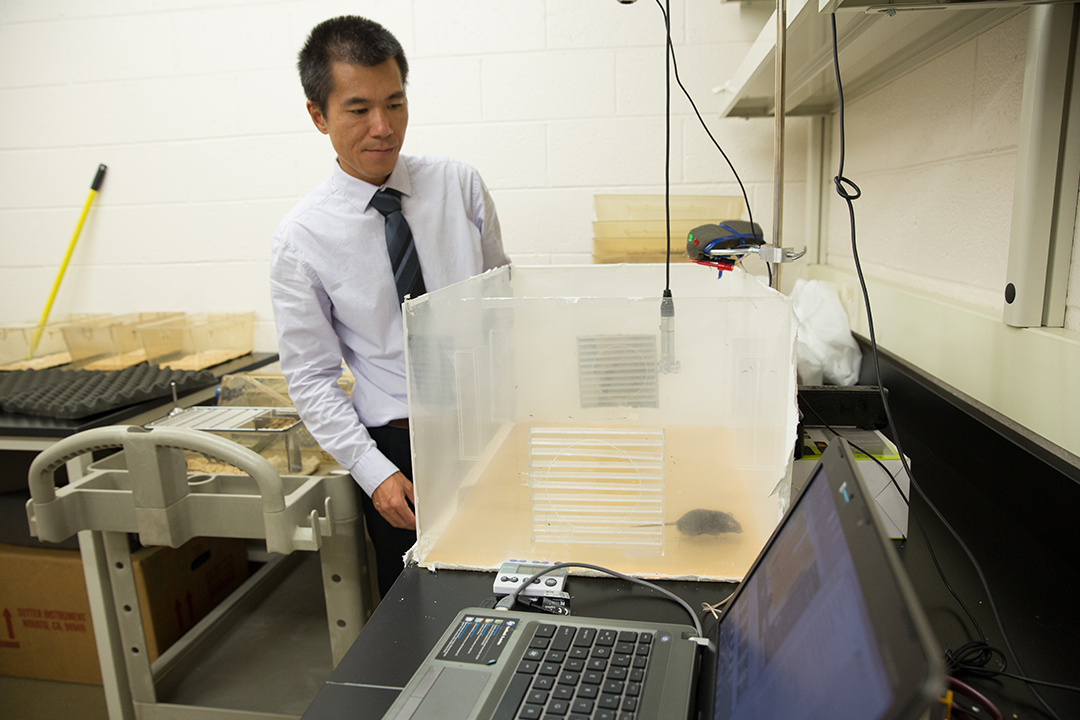 Guangying Wu works with genetically engineered mice to understand the link between schizophrenia and auditory hallucinations.

For many people suffering with schizophrenia, the most terrifying aspect of their condition is the voices—the phantom sounds that echo menacingly through their brains. Too relentless to block or ignore, they often take the form of verbal tormentors. Schizophrenia sufferers can be berated by a stream of harsh insults or commands to hurt themselves. Some hear a word or phrase repeated again and again; others are plagued by ceaseless crystalline laughter or cacophonous screeches. There often seems to be no escape from the unending auditory harassment.

Struggling to free schizophrenia patients from the auditory anguish presents a different kind of frustration for the scientific community. To date, no one is exactly sure what happens inside their brains to explain these life-disrupting hallucinations. And until scientists can determine what causes the voices, to more effectively quiet them.

“The auditory hallucinations shouldn’t be happening,” said Assistant Professor of Psychology Guangying Wu. There is nothing inherent in the known physiology of schizophrenia to account for the chorus of sounds and voices, he explained. “They simply shouldn’t be there. It’s one of the mysteries of the brain.”

Wu is trying to crack that mystery—with the help of student researchers, colleagues in other scientific disciplines and a pack of genetically engineered mice. In his lab, part of the interdisciplinary Institute for Neuroscience, Wu uses lasers and ultrasound recordings to study the tiny brains of mice for clues to schizophrenia in humans.

Wu hopes to pinpoint individual misfiring neurons within a web of billions inside the brain. Current treatments focus on the global effects of antipsychotic medications on large clusters of brain cells. But Wu believes that, by targeting single defective neurons and the network they form, his group can find insights and clues on how to comfort the world’s 55 million schizophrenia sufferers without the often debilitating side effects of current medications.

But isolating individual neurons “is like looking for a needle in a haystack,” he said. “It’s a very big haystack and a very tiny needle.”

Of Mice and MRIs

The first steps toward a possible revolution in schizophrenia science are taking place in a sixth floor lab in Ross Hall. That’s where student research assistant Emily Bragg oversees a nest of 120 brown mice. A senior majoring in speech and hearing with a psychology minor, Bragg is part of Wu’s research team, which also includes a postdoctoral research scientist, a technician and a psychology graduate student. One by one, Bragg lifted each mouse by its tail and deposited them in a carefully designed plastic chamber, where they are observed, recorded and studied with laser technology.

“It’s hard to believe, but inside their brains is data that can help millions of people,” she said. “It seems distant, but it’s not a stretch for me to see it.”

Wu’s research focuses on the brain’s complex system for processing auditory information. He recently received a two-year $65,000 NARSAD Young Investigator Grant from the Brain and Behavior Research Foundation to study communication in mice for answers to schizophrenia’s symptoms. Scientists like Wu have theorized that the auditory hallucinations experienced by 70 percent of people with schizophrenia—and 15 percent of those with mood disorders like depression—are caused by enhanced brain activity. They believe schizophrenia over-stimulates brain cells, either in the prefrontal area, which controls our reasoning, or in the cortex, our auditory region.

“For healthy people, these areas are well-controlled. They are not generating excessive spikings of neurons because the excitation and inhibition is balanced in these regions,” Wu explained. “But for people with disorders, those neurons spontaneously generate too much activity, even when there is no actual sound to stimulate them. There’s nothing there—no sound. But the neurons are discharged accidentally anyway.”

Still, those conclusions remain only theories for now, because there is no good technique for directly testing the human brain. The most up-to-date imaging method is the functional MRI. But that instrument lacks the precision and resolution to identify individual neurons and observe how they interact with networks of brain cells. “The functional MRI captures hundreds of thousands of neurons at same time,” Wu said. But Wu’s goal is to capture the activity of a single neuron.

That’s why Wu turned to mice. Mice brains may be small but, like humans, they contain distinct visual, auditory and olfactory fields. Wu works with transgenic mice, rodents that have been engineered to carry a gene that increases their likelihood of developing schizophrenia. Their altered brains emit fluorescent light waves that Wu’s team captures with a device called a two-photon laser-scanning microscope. His team triggers the mice neuron with sounds by either piping tones into their glass cases or even placing tiny headphones over the animals’ ears. The laser maps the fluorescent neuron readings with and without the sound stimulus. If the neurons fire too much when no sound is present, the mice brains show likely schizophrenic conditions.

But finding mice-sized headphones isn’t the trickiest part of the research. Similar to the rates in humans, only about a quarter of mice with the so-called schizophrenia gene—approximately 30 of Wu’s 120 mice—will actually develop the condition.

But how to determine which mice have schizophrenia? “It’s not like humans,” Wu said. “We can’t interview them.” Instead, Wu’s team monitors the rodents’ speech patterns. “Humans with schizophrenia can have disjointed, nonsensical speech,” Bragg said. “We look for roughly the same thing with mice.” All of Wu’s transgenic mice are male. Unlike female mice who communicate through squeaks, males vocalize at a range that can’t be heard by human ears. Using ultrasound technology, Wu’s team records and compares the male mice “songs” to determine which have schizophrenic symptoms.

Wu theorizes his research will reveal that the enhanced brain activity is the result of an imbalance in chemicals. Perhaps dopamine, the neurotransmitter that excites the brain, is elevated. Or maybe there are reduced levels of glutamate, the chemical that activates inhibitor neurons to “silence the brain,” Wu said. Or both scenarios may be present.

Most antipsychotic drugs regulate dopamine and glutamate levels. But they’ve shown only varying success, and often cause a profusion of side effects like involuntary movements and abnormal behavior. “From a pharmacology point of view, if we know exactly which neurons to pinpoint, we can design more efficient and safer drugs,” Wu said.

Reaching that goal will require a true collaborative effort. In addition to his team, Wu’s position with the Neuroscience Institute allows him to work alongside colleagues in physiology, pharmacology and biology. Not only does Wu share mice-shipments with Professor of Pharmacology and Physiology Anthony-Samuel LaMantia, but working with other labs acts as “a bridge,” to launch his studies beyond animal models into human trials and drug development. “This research is too complex to go it alone,” he said. “We all need to put our heads together.”