Three new black-bellied salamanders once thought to be a single species were discovered in the southern Appalachian Mountains by a research team led by biology’s R. Alexander Pyron.
August 10, 2022 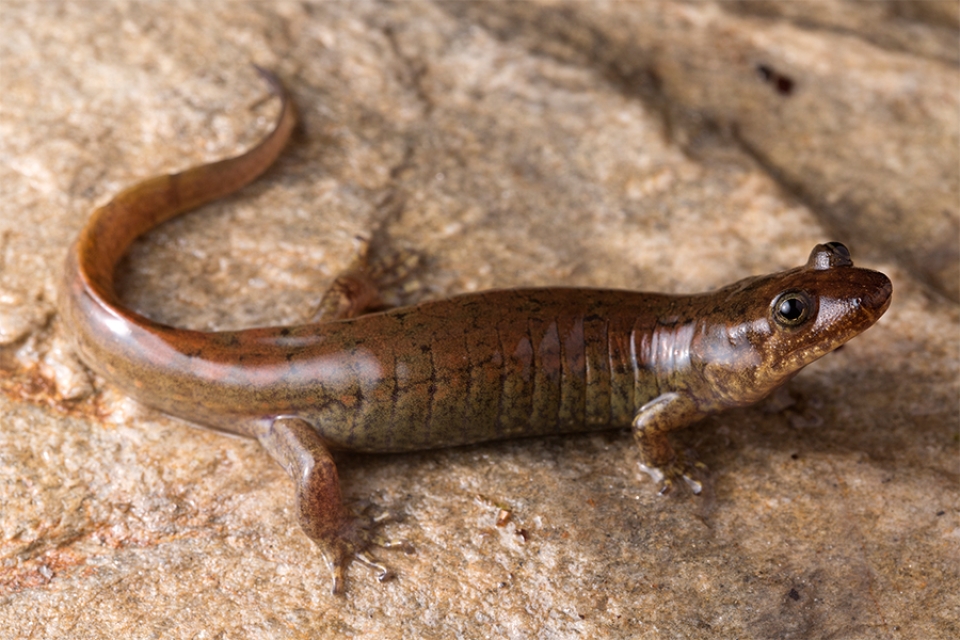 Three new species of black-bellied salamander were discovered by a research team led by R. Alexander Pyron, the Robert F. Griggs Associate Professor of Biology at the George Washington University’s Columbian College of Arts and Sciences.

The new salamanders, which are found in the southern Appalachian Mountains of the eastern United States, stem from black-bellied populations that were long considered to be a single species.

The discovery sheds light on “cryptic” species, which lack obvious differences separating evolutionarily distinct populations. According to the researchers, black-bellied salamanders were known as a single species for more than a century, but nonetheless have subtle differences between them.

“Black-bellied salamanders have been commonly studied for over 100 years,” Pyron said. “In 2002, a cryptic dwarf species was discovered, and, in 2005, DNA evidence began to suggest there were still more. It wasn’t until our National Science Foundation-funded research in 2020 that we were able to sequence genome-scale data to figure out there were actually five similar-looking species.”

The research team, which also included David Beamer, a biology instructor at Nash Community College, published their findings in the journal Bionomina.

The researchers began by observing Desmognathus quadramaculatus, a species of salamander that has been poorly characterized throughout its history. They noticed that certain morphological, genetic and geographic aspects differed among the specimens, including variations in size, shape and color pattern. After sequencing the genome from D. quadramaculatus, the researchers determined it actually consisted of five separate species, three of which are new discoveries: D. gvnigeusgwotli, D. kanawha and D. mavrokoilius.

“After looking at multiple specimens, we see obvious and substantial phenotypic variation between most lineages,” Pyron said. “In fact, the name ‘quadramaculatus,’ which was used for over 120 years, is not the correct name for any of these five species. We tracked down the original specimens at museums in Philadelphia and Paris and found that they belonged to a totally separate species. This raises the question of how ‘cryptic’ they ultimately are.”

According to the researchers, future studies should offer additional insights into the evolutionary history, geographic distribution, ecological interactions and other aspects of the new black-bellied salamanders.