On the Roof of Africa

For a team of GW students, climbing Mount Kilimanjaro was the adventure of a lifetime—and a charitable expedition.
September 12, 2018 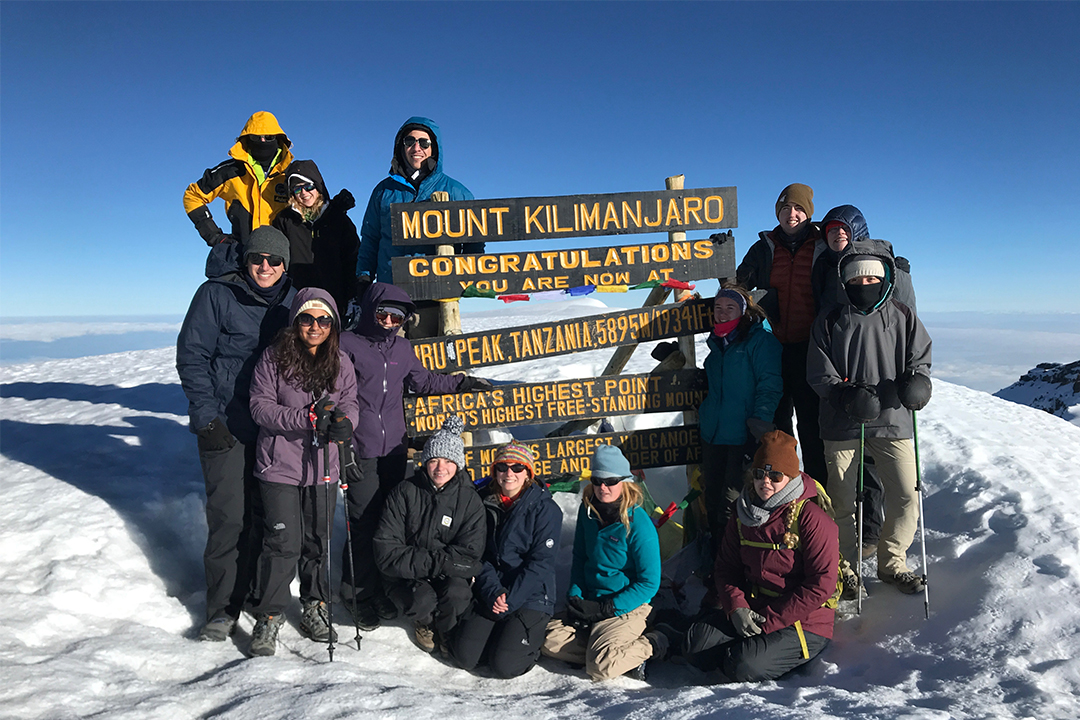 A team of GW students climbed to the top of Mount Kilimanjaro, the tallest mountain in Africa. (Photos courtesy Phoebe Elizaga)

But none of those experiences prepared them for the challenge they set for themselves this summer: climbing Mount Kilimanjaro. Over six days, a team of 14 GW students scaled the 19,341-foot mountain—the highest in Africa and the tallest free-standing mountain in the world. They hiked through five different ecosystems from rainforest to alpine desert to arctic snowcap. They began their journey in an 80 degree Tanzania jungle and ended it on the below-zero, three-and-a-half mile high peak nicknamed the “Roof of Africa.”

“I’ve never tried anything like that before,” Elizaga laughed. “I must have sounded crazy when I told people, ‘I think I’ll climb Kilimanjaro.’”

Elizaga led the adventure through Choose a Challenge, an organization that helps students combine international travel with charitable giving. Each student raised $6,000 prior to the trip. Half the funds covered their expenses while the other half was donated to the B+ Foundation, which supports families affected by childhood cancer. While searching for students to fill her team—through on-campus information sessions, social media posts and word-of-mouth—Elizaga stressed the value of the fundraising component. “It made this more than just another student trip,” she said.

Each year, about 50,000 people climb Kilimanjaro, with 75 percent making it to the top. It’s a dangerous journey; 1,000 climbers are emergency evacuated from the mountain and about 10 deaths are reported each year. Still, the path to the summit travels mostly along walking routes rather than rocky cliffs, and climbers have ranged in age from 7 to 90.

Elizaga’s team—which also included two other university students, a doctor and a guide—knew the biggest danger was altitude sickness. At the extreme heights, low oxygen pressure can cause nausea, headaches and dizziness. (Two stricken GW hikers were forced to turn back before reaching the summit.) The team carried Diamox tablets in their backpacks, along with sleeping bags, hiking poles and clothes for both the jungle heat and the mountain cold. “The landscape and terrain changed as we continued to climb. We went from a rainforest environment on the first day to climbing in snow on the last,” Sajna said. Elizaga stashed much-needed hand warmers in her pack, while Philbrick added essentials like granola bars and sunscreen. “The sun is so strong. A couple of people came away with some crazy burns that looked pretty painful,” she said.

They began their journey with a full-day trek through Moshi, a lush northern Tanzanian town at the base of the mountain where hikers can spot elephants and leopards in the green meadows. On day two, the jungle’s waterfalls and valleys were quickly replaced by moss-covered rocks. By the third morning, as temperatures plummeted, the team reached the Barranco Wall, a steep rock embankment soaring 800 feet into the air.

The Kilimanjaro ecosystems range from a rainforest as its base (left) to snow-capped peaks at its summit (right).

As their guide urged them to go “pole pole”—Swahili for “slow”—they navigated the narrow paths on their hands and knees. “There were times when I couldn’t feel my fingers, and my legs ached so much that I thought about giving up,” Elizaga said. But soon a fellow hiker would pat her on the back and cheerfully repeat the team slogan: Morale is high! “I’d grin and keep going,” Elizaga said.

Philbrick looked forward to the nightly base camps and sharing high-carb dinners of bread and zucchini soup. “The food was warm and delicious. We became quite close throughout the trekking and dinner was always a nice time to relax and decompress after the day,” she said.

On the fourth day, the team broke camp at midnight for the eight-hour climb to the summit. Weary and cold, they inched their way along the icy route. Following her head lamp, Elizaga could only see a few feet in front of her in the dark. She heard the guide chipping at the path ahead with his ice pick. “I couldn’t even talk. I just focused on putting one foot in front of the other,” she said.

Well above the clouds, Philbrick began feeling light headed as they reached Uhuru Peak, the highest point in Africa. At the extreme altitude, junior economics major Evan Bennett said he could barely keep his balance. “I literally fell several times just trying to stand up,” he said.  He concentrated on his unsteady footing as another student tapped his shoulder and pointed to the sun rising over the summit. “It was a difficult night but also insanely rewarding to see that sunrise,” he said. Philbrick could make out the earth’s curvature along the horizon. “Maybe it was the lack of oxygen to my brain, but my thoughts definitely wandered to how minuscule we all are compared to the size and beauty of the natural world,” she said.

The two-day trip down Kilimanjaro was harder on their legs than the ascent, Elizaga said. And while they’d completed the journey of a lifetime, all the hikers were relieved to find a bed and a shower. “We had an incredible adventure and we got to help a charity we all came to love,” Bennett said. “And now when people trade fun facts about themselves, I’ve got everyone beat.”


At 19,341 feet, Kilimanjaro is the tallest free-standing mountain in the world.