On a remote volcanic island in the South Pacific, Biology’s Gustavo Hormiga hikes forests and scales mountains to find rare spiders. On each return trip, he’s helped define an evolutionary legacy and preserve an ecological landscape.
May 10, 2018 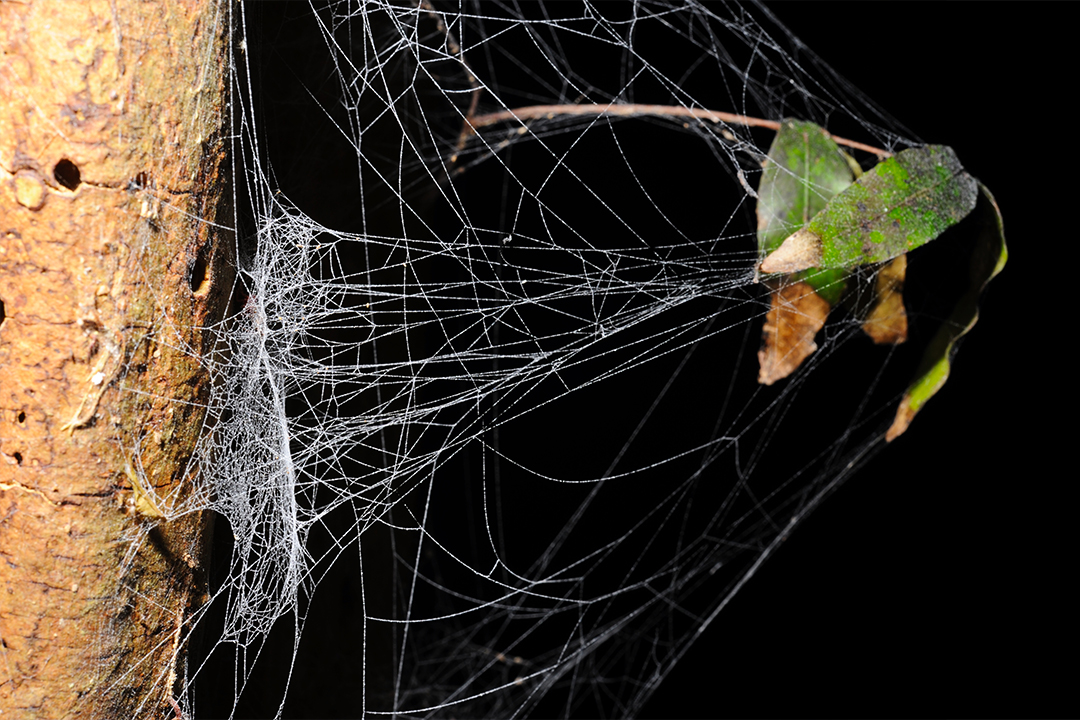 The web of a Laminacauda rubens spider from Robinson Crusoe Island. With a lack of predators on the island, the spider is free to extend its web away from tree trunks. (Photos courtesy Gustavo Hormiga)

For Gustavo Hormiga, the Ruth Weintraub Professor of Biology, the Juan Fernandez Islands are a researcher’s dream. The sparsely inhabited volcanic archipelago 400 miles off the coast of Chile is like an evolutionary playground. Virtually untouched by the outside world, it’s the perfect living laboratory for studying the evolution of plants, birds and, Hormiga’s specialty, spiders that exist nowhere else on earth.

This spring, Hormiga made his third National Geographic-funded research expedition to the islands. Since 2013, he has discovered 11 new spider species on Juan Fernandez—including two on his most recent trip—and conducted research that could help to define island conservation efforts. Atop jagged mountain peaks shrouded in grey mist, Hormiga has sighted hundreds of rare and undiscovered species: dwarf spiders grown to more than one centimeter when they should only measure a millimeter or two; bright red arachnids that feel like outcasts amid packs of black and brown species; and spiders with legs that are three times as long as their bodies and oversized pincer-like appendages called chelicerae extending from their mouths.

As an arachnologist and a taxonomist—a scientist who discovers, classifies and names life on earth—Hormiga’s work is helping to uncover new species, save endangered ones and expand the field of conservation biology.

“If these species are not collected, described and named, we would not have the hard evidence they existed,” he explained. “We have extinction going on at a massive scale, so field work is extremely important, to collect and document those species before they disappear."

While most people consider spiders a creepy annoyance at best, arachnids have always been a passion for Hormiga—whose name, ironically, means “ant” in Spanish. “Most kids go through a bug phase. Some of us never get out of it,” he laughed. “It could have been beetles or flies or even ants. For me, it happened to be spiders.” Through his travels to locations from equatorial Africa to the Amazon rainforest, Hormiga has discovered numerous new species and genera of spiders and made breakthrough observations on web architecture and its relation to the evolution of spider species.

In Juan Fernandez, Hormiga found the perfect marriage of research subject and unexplored ecosystems. The trio of volcanic islands are made up of the densely wooded and mountainous Alejandro Selkirk Island, the uninhabited Santa Clara Island and the relatively hospitable Robinson Crusoe Island. (Selkirk, an 18th century privateer marooned on Robinson Crusoe, may have been the inspiration for the Daniel Defoe novel—although he never set foot on the island that bears his name.)  Over centuries, the Juan Fernandez Islands have served as a pirate hideout, a penal colony and, as of 1977, a UNESCO Word Biosphere Reserve. Only about 1,000 people live on Robinson, mostly lobster fisherman and their families. A 2010 tsunami destroyed most of Robinson Crusoe’s fishing village, San Juan Bautista, killing five people.

Millions of years ago, plants, birds and insects colonized the islands from surrounding land masses. Most spiders “flew” to the islands through a technique called ballooning—the airborne arachnids used their silk as kites to carry them on air currents from the continent. The isolated Juan Fernandez arachnids were free to evolve in unique ways and with “astonishing diversity,” Hormiga said. Under thick forest canopy, Hormiga has identified spiders that shifted their web building habits and others that stopped building webs altogether, perhaps, he theorizes, to forage prey on the ground. The absence of natural competitors on Juan Fernandez may explain the relatively gigantic one-centimeter spider’s unfettered growth, he suggests.

And in examining web architecture on the islands, Hormiga found that the same spider species that, on the continent,  build flat, horizontal webs on the ground actually tilt their webs 90 degree off tree trunks on Juan Fernandez. Hormiga believes their web weaving evolved to suit their environment. “There is basically no competition like there would be on the continent, so these spiders are free to occupy biological niches that otherwise might have been taken,” Hormiga said.

But if Juan Fernandez is a scientist’s paradise, getting there is a traveler’s nightmare. The journey begins with a six-seat propeller plane ride from Santiago through buffeting South Pacific cross winds. The plane touches down on a narrow landing strip on Robinson Crusoe. Next, Hormiga boards a fishing boat for a choppy 90-minute voyage around the island’s northern coast; the jagged inland terrain is nearly impassable by car. From there, it’s a mule-guided hike up rocky passages, unsteady cliffs and steep slopes as he climbs El Yunque—the “Anvil”—the island’s 3,000-foot peak.

To photograph and retrieve samples of nocturnal spiders and their webs, Hormiga navigates Robinson Crusoe’s uncertain terrain at night. He and his co-researcher from the University of Barcelona spend long hours shining their head lamps under rocks, ferns and leaf litter while dusting nearly invisible silk webs with corn starch. Laminacauda, the dominant genus on these islands, has an unprecedented 15 species, six of them yet to be named, most of them living in close contact with each other. During his last trip, Hormiga observed a long-legged new species that appeared to be a web invader that preys on other spiders, a previously unknown behavior for this group of spiders. Back in his lab, Hormiga discovered that the invader was a member of Neomaso, part of yet another insular radiation.

“There is a thrill to walking into a forest and finding something that no one else has ever seen before. It’s priceless,” he said.

Hormiga plans to return to Juan Fernandez next year. And he knows the opportunities for new island discoveries are dwindling. Invasive species—plants like Maquis and Blackberrys and non-native mammals like rabbits, rats and mice—are threatening Juan Fernandez’s fragile ecosystems by devouring the islands’ vegetation and preying on native species. Along with its spiders, Hormiga says much of Juan Fernandez’s wildlife is in danger, from its ferns and brushwood forest trees to a hummingbird called the Juan Fernandez firecrown (the only species of hummingbird endemic to an island). Meanwhile, he hopes mapping the islands’ species springboards conservation efforts—while continuing to chart its evolutionary legacy.

“To preserve the islands’ diversity, it is so important to know exactly what it is living there, how it got there and how and why it evolved like it did,” he said. “We have to know what we are saving in order to save it.”