Eiko Strader’s socioeconomic study on earning inequality challenges the way we look at immigrants’ impact on the economy.
December 12, 2018 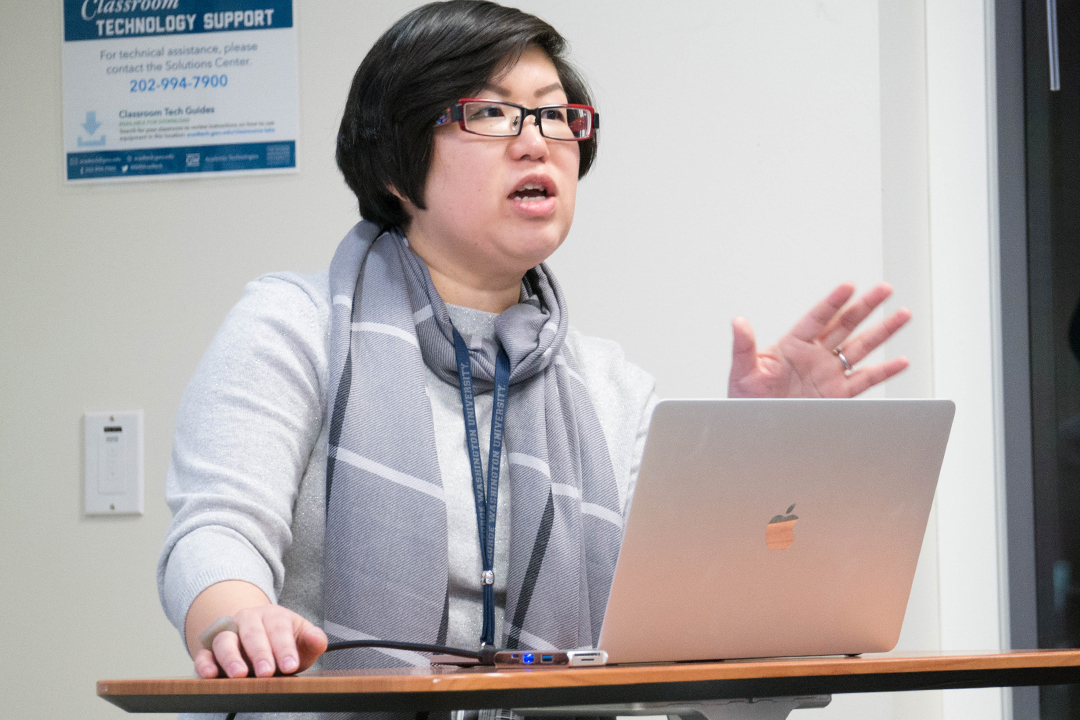 Just months prior to beginning her new job last year as an assistant professor of public policy and women's, gender and sexuality studies at Columbian College, Eiko Strader was defending her PhD dissertation at the University of Massachusetts Amherst. Little did she know that, one year later, her research on immigration's economic impact and wage inequality would earn her the 2018 Distinguished Dissertation Award in social sciences, the Council of Graduate Schools’ (CGS) top honor for scholarly excellence. The “best of the best” dissertation prize, as the council characterized it, is awarded to one dissertation in social sciences and one in mathematics, physical sciences and engineering.

Strader’s dissertation—“Immigration and Within-Group Wage Inequality”—broadens her research on gender inequality and public policy by training a sociologist’s lens on the economic impact of immigration. While immigrant’s effects on the wages of native-born workers has been widely studied, Strader noted, the research has primarily focused on low-skilled men and paid little attention to women. “When asking ‘Are immigrants taking our jobs?’ policymakers and mainstream labor economists are largely only looking at native-born men,” she said. “But native-born women are also in the labor market. Why is nobody looking at them?”

In many ways, Strader’s research focus is a product of her time spent as a high school exchange student in Boise, Idaho. A native of Japan, her first impressions of the United States. were not entirely favorable. She hoped to be embraced by a diverse, inclusive community; instead, fellow students teased her and teachers often relegated her to remedial classes. Still, even after returning to Japan, she was fascinated by America’s struggles with inequality. “I had to re-think what I thought I knew about the U.S.” she said. “It wasn’t a place where everyone respected each other. But Americans are aware that they are not perfect and they try to do something about it. I found that complicated and exciting.”

While receiving her BS in sociology at Boise State University and her PhD from Amherst, Strader’s research gravitated toward work-family policies and employment outcomes of men and women across different countries. She also focused on the U.S. military as a comparative case. She examined whether mothers in the military face the so-called “motherhood penalty” and earn lower wages relative to childless women (they do, she found, but the patterns differ from those of civilians). She has also conducted a major study of ex-felons’ strong military performance. Her conclusion that soldiers with a felony background are promoted more quickly than other enlistees received national attention in media outlets like The Washington Post.

Strader is not sure why her dissertation stood out among the other CGS submissions, but she suspects the timeliness of immigration-related topics played a role. “When I started working on this in 2014, no one was talking about building a wall,” she said. “Now I have to wonder what will happen to native-born women who rely on migrant domestic workers.”

Strader hopes research like hers encourages policymakers to examine commonly held assumptions and consider the impact of immigration from all angles. “I’ve always been interested in taking the same datasets as others but changing the way we use them to ask and answer questions.”