Grants totaling $1.2 million from the National Science Foundation will broaden the research and learning experiences for CCAS students participating in the Kenyan field school.
November 14, 2019 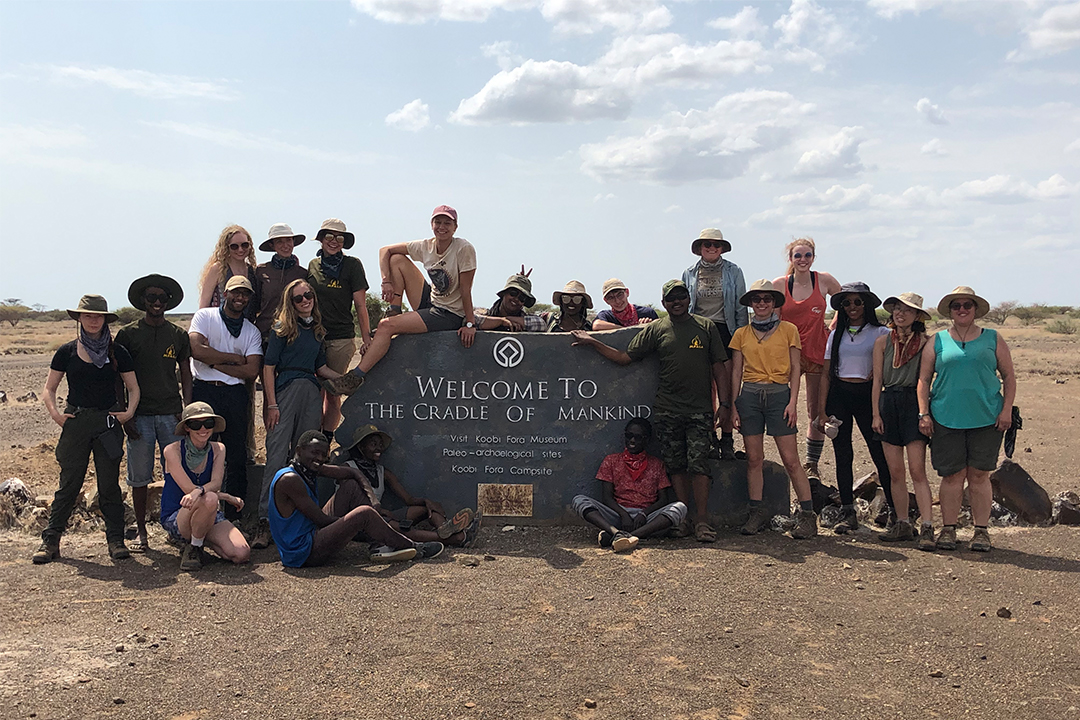 Junior Hannah Jacobson knew what she wanted from the Koobi Fora Field School when she traveled to Kenya last summer. A collaborative effort between the National Museums of Kenya and Columbian College’s Center for the Advanced Study of Hominid Paleobiology, the school is the world’s premier international paleoanthropology training operation. Researchers in the fossil-rich region have uncovered teeth and bones that date back four million years.

But digging in the dirt wasn’t the only thing that appealed to Jacobson, a double major in biological anthropology and dance. Instead, she sought to learn about the Daasanach, the area’s nomadic tribe of livestock herders. As she researched the affects of cattle grazing on grasslands, Jacobson joined the school’s scientists for interviews with the Daasanach on topics from stone tool production to their lifestyle and culture. “Each bit of new knowledge we received was like a little gem,” she said, noting that, since the Daasanach have an oral storytelling tradition, some of the information had never been recorded in writing. “It is a privilege to interact with individuals who are so similar and yet so different.”

The Koobi Fora Field School may be a fossil field of dreams, but some of its students like Jacobson have academic interests outside of traditional archaeology. Now, with the aid of two National Science Foundation (NSF) grants totaling $1.2 million, the program is taking steps to offer a wider range of experiences. The school is continuing efforts to integrate environmental sciences and other human biology components into its curriculum while attracting more diverse students who are traditionally underrepresented in STEM fields.

“When people think of the Koobi Fora Field School, they think of paleoanthropology and exploring the deep past,” said David Braun, professor of anthropology and co-director of the field school. “That is absolutely our specialty. But we also have students who want to study ecosystems or culture or soil chemistry. And there has to be a space for them too.”

The NSF grants will also help enhance research and technology areas like geospatial mapping and data science. “We feel an obligation to make sure that every student leaves our program with concrete, realizable skill sets,” Braun said.

The six-week Koobi Fora educational experience combines lectures and labs with hands-on fieldwork. From classrooms to excavation sites, students at the field school work side-by-side with world-class archaeologists. That won’t change, Braun noted, but the program will boost its profile by introducing more elements of human biology—an interdisciplinary approach to understanding humans from biological, behavioral, social and cultural perspectives. “Our research is interested in fossils, but we're not just there to collect rocks,” Braun said. “We want to have an impact on the health and lives of the communities that live there.”

In some cases, students accompany healthcare workers to Daasanach homes to survey the implications of nutrition and access to clean water. Other students like Jacobson are examining the ecological impact of Daasanach pastoralism on the region’s ecosystem. The nomadic community’s land use practices—grazing livestock and bush clearing in protected bomas, circular enclosures where cattle are housed in the evening—have historically been seen as detrimental to the natural landscape. But Jacobson theorized the opposite might be true. By keeping their livestock enclosed within the boma, the Daasanach may create so-called “hotspots” of fertile soil layer. “The idea is that vegetation that grows back inside the boma will be healthier than vegetation outside due to the increased fertility level of the soil,” she explained. Jacobson charted pastoralists in northwestern Kenya by using drones to compare images of vegetation inside and outside the boma.

Braun hopes the discipline and diversity expansion will draw more students to a program that has always offered an extraordinary research landscape. “Koobi Fora is unlike any place I have been to before,” said senior Noelle Purcell, a double major in biological anthropology and archaeology who attended the field school last summer. Despite the 120-degree heat and the threat of scorpions in her sleeping bags, Purcell most remembers waking to the roar of lions and leopards in the African savannah, and camping in the incandescent glow of Lake Turkana—known as the Jade Sea. Stepping out of her tent early one morning, she recalled being awestruck by the star-filled sky. “In the span of minutes, I saw no fewer than 10 shooting stars. It was simply amazing,” she said. “I’ll never forget what a special place this is.”


Noelle Purcell, a double major in biological anthropology and archaeology, digging through soil from past geological periods at a Koobi Fora site