Biology’s Keryn Gedan leads her student researchers into the Eastern Shore marshes of the Chesapeake Bay, where sea level is rising at three times the global average.
October 9, 2018 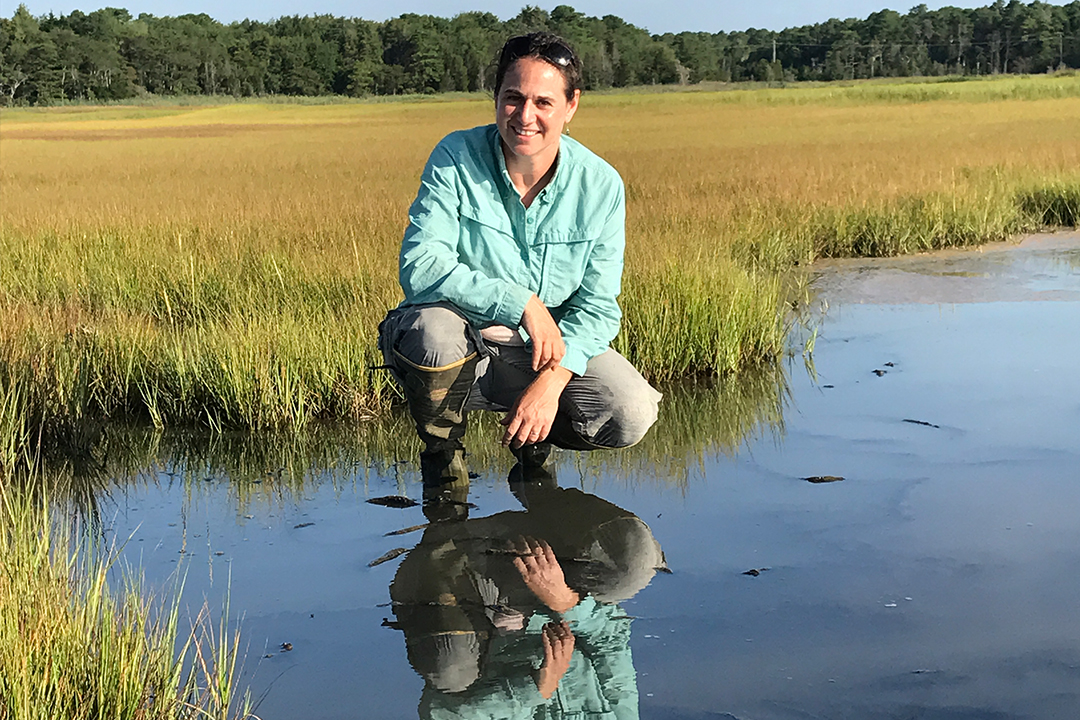 Before Assistant Professor of Biology Keryn Gedan invites a student to join her research team, she’s upfront about her lab conditions: It’s hot, she tells them. It’s buggy. They’ll spend much of their fieldwork knee-deep in mud, fighting off ticks. And they’re as likely to walk away with a nasty case of poison ivy as a scientific breakthrough.

“I have scared away some students,” Gedan laughed. “I try to ascertain if they like camping, if they like being outdoors. Because that’s where the work gets done.”

Gedan's laboratory is the Chesapeake Bay, specifically the tidal wetlands of Maryland's lower Eastern Shore. And if they can handle the humidity and mosquito bites, her students are on the frontlines of an environmental drama played out along America’s largest estuary.

Rising sea-levels and saltwater intrusion are taxing the Chesapeake Bay’s natural ecosystems—creating new challenges for the humans and plants who depend on the region for survival. Across the acres of marshes and farmland, with flocks of herons and egrets gliding over miles of streams, Gedan and her team witness the scars of climate change: abandoned corn fields blanketed in salt-crusted soil; 10-foot-tall reeds strangling fields of marsh grass; and “ghost forests” of trees stripped of bark by salt and sun.

“This is happening and it’s going to keep happening,” Gedan said. “We are feeling the effects throughout Maryland, Virginia and the whole Mid-Atlantic region.”

But Gedan and her team of five undergraduate, graduate and postdoctoral researchers are looking for solutions. They can’t turn back the tide of sea-level rise, but they can better prepare bay life for the new ecological realities. Partnering with environmental agencies—with principal support from Maryland Sea Grant and the United States Department of Agriculture (USDA)—Gedan's lab is leading bay conservation efforts. They are mapping salts’ march through the coastal land, experimenting with alternative crops and growing transition plant species both in the field and at the Science and Engineering Hall (SEH) Greenhouse.

“The Chesapeake Bay is an icon for estuaries and it is a natural laboratory for understanding sea-level rise,” Gedan said. “If we can understand how these changes occur here and learn about management and conservation than our results will inform the global response to sea-level rise everywhere.”

In many ways, the Chesapeake Bay is ground zero for sea-level rise. Due to a combination of climate change and the natural subsidence of already low-lying land, the bay has some of the highest rates of sea-level rise in the world—approximately three times the global average. As the elevation between land and sea shrinks, ocean saltwater seeps into the surface and groundwater. The salt also releases nutrient pollution that remains in the soil from fertilizers.

That's a disaster for farmers. Many traditional crops—including corn and soy, which dominate the Eastern Shore—are sensitive to high soil salinity. As a result, farmers have been forced to abandon once-fertile fields. “When I see salt-tolerant plants in a farm field, I get a little riled up,” Gedan said. “They shouldn’t be there.” Plant life that is unable to survive in the salty water face stark choices: adapt or drown. Many coastal plant populations have been pushed inland, ceding ground to more salt-tolerant species.


A salt-tolerant plant grows in a salt-damaged cornfield in Somerset, Maryland.

Gedan and her research team are tackling the sea-level threat on several fronts. Along with collaborators from the University of Maryland, the University of Delaware and the nonprofit research institution Resources for the Future, Gedan received  a $1.2 million USDA grant. The project’s goals include introducing new salt-tolerant crops like sorghum and switchgrass to help farmers adapt. (A biofuel crop, switchgrass can also provide material to the region’s poultry industry.)  During their numerous research trips to the Eastern Shore, Gedan and her team often plant rows of the new crops by hand, with support from affected area farmers.

“These farmers really care about the bay and the environment,” Gedan said. “They are trying to make a living in a very tough profession. A lot of them are bird watchers and hunters. Their lives revolve around the bay.”

Meanwhile, her team collects seeds and soil from the bay’s farms and fields to determine which marsh plants might thrive in the changing environment. They grow the seeds at the SEH greenhouse and introduce plants back to the shore to test their viability.

For her team, the summer weekends spent in the tidal marshes can be as rewarding as they are grueling. Justus Jobe, a PhD student who has been a member of Gedan’s lab for three years, grew up fishing, crabbing and hunting around the Chesapeake Bay. “This passion for the bay is what brought me into the lab,” he said. Still, even Jobe has had to adjust to the rigors of taking salt measurements and soil samples in the marshes. “It is physically tough. You can be driven mad by the mosquitoes and black flies buzzing around. In the summer, the sun is beating down on you all day with no shade.”

Despite the sometimes taxing fieldwork, Jobe and the other student researchers enjoy not only the opportunity to conduct research in one of the nation’s most important ecological landscapes, but also the freedom that Gedan gives them to design their own experiments. Jobe is examining the effects of marsh migration on the shore’s deer population. Maxwell Sall, a senior majoring in environmental studies and minoring in chemistry, is measuring the effects of salinity on the blue carbon stored in the marsh soil. “All of these arduous trips to the field eventually add up to some very exciting discoveries,” he said. And senior biology major Phoebe Shaw is studying the spread of an invasive marsh grass called Phragmites australis throughout the coastal ecosystem.

“I feel so lucky to be able to work outdoors in some incredibly beautiful places,” Shaw said. “It is so rewarding to work and learn from such amazing people.”