A veteran of space explorations, scientist and multiple alumna Pamela Conrad launched her second Mars rover as part of the team that guided NASA’s Perseverance to the red planet.
March 10, 2021 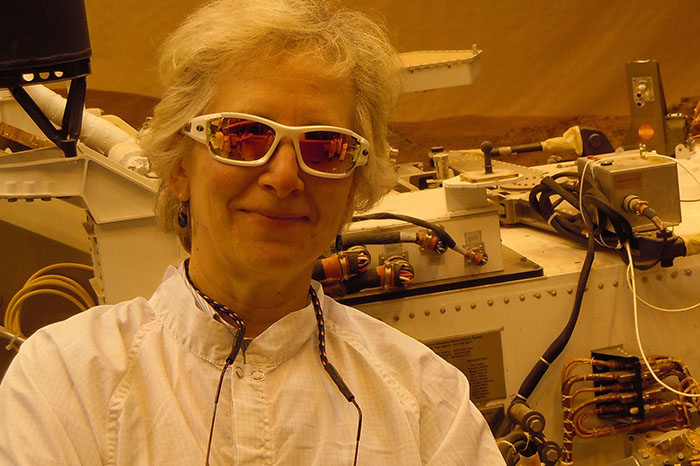 When the NASA rover Perseverance touched down on Mars in February, completing a 300-million mile journey from a Florida launch pad to a dusty red planet crater, Columbian College alumna Pamela Conrad, BA ’74, MMus ’87, MPhil ’95, PhD ’98, could say she’d been there before.

An astrobiologist and mineralogist, Conrad is a veteran of space explorations. During a 20-year career at NASA’s Jet Propulsion Lab and Goddard Space Flight Center, she was a scientist on NASA’s 2012 Mars Science Laboratory expedition that brought the Curiosity rover to the planet. Now, as a member of the science team for the latest Mars mission, Conrad blasted off on one more voyage to Earth’s nearest neighbor.

Working with an international team of colleagues, she helped map the Perseverance landing site, and is adding her tactical and research expertise to the hunt for signs of past life. As she celebrated another successful rover landing, Conrad said the feeling is still out of this world.

“There is a great sigh of relief when you watch it touch down because you know it represents years and years of work by a huge team,” she said. “It’s a very emotional, fantastic experience.”

The $2.7 billion Perseverance will spend at least two Earth years—roughly one Martian year—using sophisticated instruments to search for clues that the barren Martian terrain once supported ancient life. Perseverance will collect and cache samples from Mars and return them to Earth. Conrad is among the scientists who will work with the samples to characterize the Martian surface and look for indications of past life. Perseverance builds on some of the same technology within the Curiosity rover, just as Curiosity drew on lessons from previous missions. Each new mission “moves knowledge further and further” toward understanding Mar’s past, Conrad said.

“We are trying to understand if the processes that allowed life to develop and flourish on Earth ever occurred on Mars. If they did, we want to know if life appeared—and, if not, then why not?” she said. “Are we a rare occurrence? Or is life on other planets a common event? Mars is a good place to begin to answer that question.”

Conrad has been a star gazer since the dawn of the Space Age in the 1950s. As a child, she and her father scanned the night sky from her Maryland backyard for a glimpse of the Soviet satellite Sputnik. She memorized every detail of the seven original Mercury astronauts from their weight to their eye color. “We were all space crazy then,” she recalled. “I would have loved to go into space. But there were no women astronauts. As a girl, that aspiration was unavailable to me in the 1960s.”

As a music major at GW, Conrad had considered a career as an opera singer. Eventually she returned to her love of science, earning her PhD in geology. At NASA, Conrad focused on measuring the habitability potential of harsh environments. “I study life in the universe—from its origins to its distribution to its fate,” she said.

Conrad’s research has taken her across the galaxy and to some of the most inhospitable locations on Earth. She has traveled on nine arctic and two Antarctic expeditions, and explored deep-sea hydrothermal vents in the Pacific Ocean from a submersible. At each stop, her goal was to identify conditions in which life can develop and measure how it adapted to changing environments. “The investigation of what makes a planet habitable—and the factors that may alter that potential—are relevant to understanding the future of our own planet,” she said.

Earth and Mars may be close neighbors, but they evolved differently during their 4.6 billion year history. Mars is only about half the size of Earth. Its atmosphere is much thinner and mostly carbon dioxide, with no Earth-like magnetic field to protect the surface from the radiation of cosmic rays and energetic solar particles. Between the global dust storms, punishing winds and wild diurnal temperature swings, Mars would seem an unlikely host for life. But, as Conrad noted, earlier NASA missions like Curiosity revealed that Mars once had a warmer, more clement climate with signs of liquid water at the surface. “When we look at Mars, are we looking at a completely different animal from our planet? Or are we looking at our own future?” Conrad asked.

In 2012, Conrad watched with the science team at the NASA Jet Propulsion Laboratory as Curiosity safely landed, erupting into cheers with her colleagues and celebrating with commemorative Mars candy bars. (Hers still sits on her bookshelf.) COVID restrictions forced her to view the Perseverance landing remotely from her home in Annapolis. While she called the experience “bittersweet,” the successful landing on the red planet’s surface was still a moment of joy and wonder—even for a space veteran. “It’s remarkable—no matter how many times you see it.”