Alumnus Michael Schmidt found a home at GW and met his future partner. His $1 million gift to support the LGBTQ+ campus community honors the legacy of his GW experience.
December 9, 2019 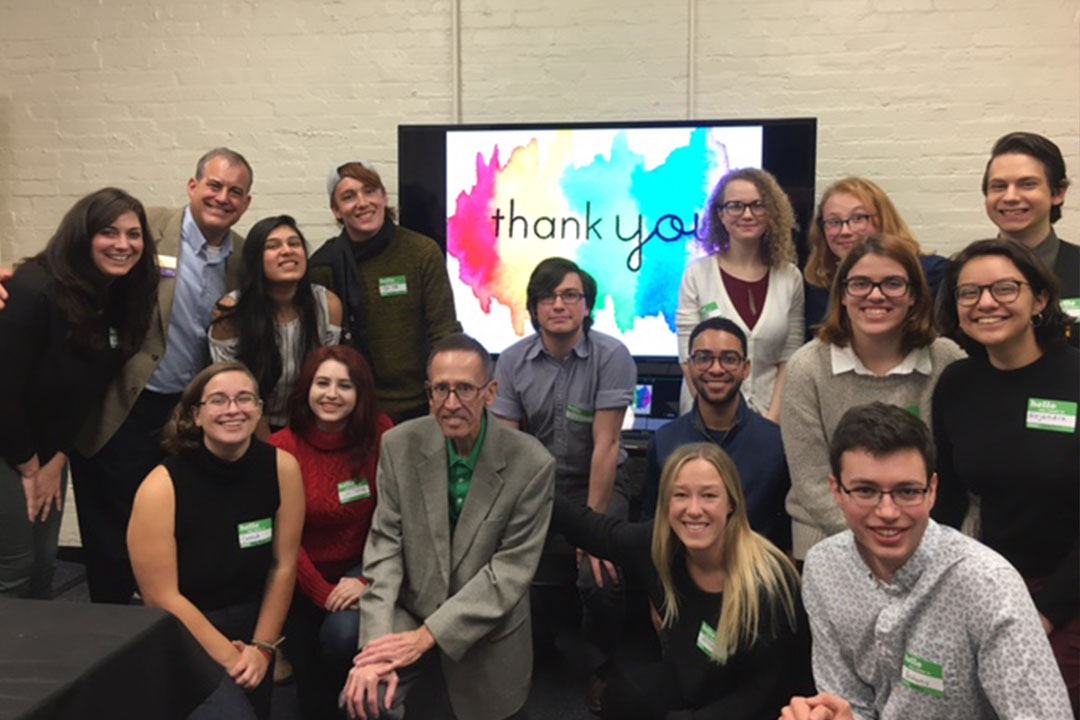 In 1974, Michael Schmidt, BA ’78, MBA ’85, had just arrived on the GW campus and was already facing difficult questions. Like many other first-year students, he was uncertain about his major, exploring political science and drama before eventually choosing speech-language pathology and audiology. But beyond his academic focus, he was also searching for his own personal identity. He had recently come out to his parents in a letter. When weeks went by without a reply, he nervously called his Connecticut home. Yes, his mother confirmed, they’d received his letter telling them that he was gay.

“Then she said—and these were her exact words —‘As far as we're concerned, we have no son named Michael,’” Schmidt recalled.

Although many gay youth were disowned by their families, Schmidt was pleased that, within a year, he reconciled with his parents, who came to fully accept him for who he was. At the time, however, it was devastating for him to hear. But it was also, Schmidt revealed, an opportunity. Rejected by his own family, he found a new one—the burgeoning gay community at GW. He joined the Gay People’s Alliance, eventually leading the student group in his sophomore year. He made new friends and forged his own personality. And he met his future partner. “GW was a welcoming place,” Schmidt said. “I found all these people who were dear to me and, for the first time, I found a community where I could express myself.”

And now Schmidt is helping support today’s LGBTQ+ community at GW. His $1 million planned gift will provide a scholarship for a student who is involved in the LGBTQ+ community at GW. His gift will also benefit the LGBTQIA Resource Center, which celebrates and supports sexual and gender diversity. The fund—called the Michael R. Schmidt and Bruce C. Craig Fund—is named after Schmidt’s late partner Bruce Craig, BA ’78, MA ’84, who died of pancreatic cancer in 2010.

“GW really gave me my adult life,” Schmidt said. “It gave me my partner. I thought it would be a perfect legacy to leave a gift in both our names that we could share with today’s robust, forward-looking students.”

Last year, Schmidt met with current students from the LGBTQIA Resource Center to learn how their GW experiences compared to his own. About a dozen students listened to him describe the campus' small but energetic gay community of the ’70s. “He was really interested in hearing about everybody’s LGBTQ+ identities and their stories about their time at GW,” said Wren O'Kelley, BA ’19,  a psychology and international affairs major at the time of Schmidt's visit. “It was an all-around wonderful time for us.”

Hailing from suburban Connecticut, Schmidt came to GW on a scholarship and was awestruck by the Washington, D.C., scene. “I was a small-town boy going to the big city—and I loved every bit of it,” he said. Schmidt originally planned to study political science in the heart of the nation’s capital. But as an aspiring actor, he soon switched to drama—and learned two important lessons about theatre. “First, acting is really hard,” he laughed. “And second, I was no good at it.” Schmidt switched his major once more to speech-language pathology and audiology. He eventually returned to Foggy Bottom to earn his MBA.

Even as he was coming out to his family, Schmidt joined the Gay People’s Alliance, the precursor to today’s student-run Allied in Pride organization. The group helped him finally feel comfortable expressing himself as the person he wanted to be. While posting signs for a meeting, Schmidt met his future-partner Craig in a University Student Center elevator. Craig had walked around the block seven times, Schmidt recalled, before mustering the courage to attend the Gay People’s Alliance meeting. “I was the first openly gay person he ever met,” he said. The pair bonded during a film studies class, watching Casablanca at the Circle Theatre on Pennsylvania Avenue. They began dating soon after, and moved into an Adams Morgan apartment after graduation.

Before meeting Craig, “I had the feeling that I wasn’t capable of loving another person,” Schmidt said. But throughout their 32-year relationship, Schmidt discovered, “that I could come to love someone more than I even loved myself.”

A retired advertising executive for The Washington Post, Schmidt is now close with his family, many of whom attended Craig’s funeral. He has kept his ties with GW and hopes that his scholarship gift will help future students also find a family on campus. When speaking to the students at the LGBTQIA Center, Schmidt sympathized with their ongoing struggle against stigmatization, even as he cheered the advances made since his years at Foggy Bottom. “I was amazed to learn that it has gotten to a level where gender identity has become almost an everyday part of the university, which is not something that was part of life when I was there,” he said. Most impressive, Schmidt said, was the passion and optimism he saw among today’s students. “They have a real zest for the future, “he said. “In some ways, they remind me of me.”