Along the 50 miles she runs each week in practice, senior cross country star Lauren Anderson often finds her mind wandering. Sometimes she loops a song through her head. Sometimes she plans her schedule for the week. And sometimes she thinks about lemurs.

Yes, lemurs. On the track and in the lab, Anderson, a biological anthropology and biology double major, has developed a self-described obsession with the wide-eyed, long-tailed primate stars of Disney movies and PBS nature shows.

“When I bring up lemurs, my friends usually say, ‘What are they, cats?’” Anderson laughed.

Once she explains that lemurs are mammals who look more like monkeys than tabbies, she admits that she too didn’t know much about them before joining Associate Professor of Anthropology Brenda Bradley’s Primate Genomics Lab in the Center for the Advanced Study of Human Paleobiology. The research assistants in Bradley’s lab—nine undergraduates, two graduate students and two post-docs—are lemur experts. They can list the 111 lemur species, from some as small as a golf ball to a 2,000-year-old ancestor who was as large as a gorilla.

“Sometimes I feel like my lab members and I proselytize for lemurs,” Bradley said. “When people think of primates, they think of apes. But we're always trying to tell everyone how exciting lemurs are.”

Found only on the island of Madagascar, lemurs evolved independently from monkeys and apes. Their rarely-seen diversity—lemurs living just a few miles from each other can have vastly different appearances, diets and habitats—have made them a research gold mine, even as they’ve become one of the world’s most endangered animals. “Lemurs can inform everything from understanding human biology to conservation efforts and forest management,” Anderson said.

And the primate’s unique evolutionary journey has led to two separate Luther Rice Undergraduate Research Fellowships for Bradley’s students. Anderson received the fellowship, which helps fund student research in collaboration with a faculty mentor, to test the range of color vision among lemur populations. And senior biological anthropology major Thea Anderson (no relation) also received a fellowship to determine if the distinctive eye-patch facial markings of some male lemurs evolved as a sexual selection trait. Bradley’s primate research lab has produced four Luther Rice scholars in just the last two years. “I don’t know what the secret is other than having these exceptional students and this particularly fascinating research subject,” Bradley said.

Left free to evolve in an isolated island ecosystem, Madagascar’s lemurs occupy habitats from rainforests to wetlands and mountains. But much of their home is disappearing, threatened by illegal logging, resource mining and the practice of burning forests to make room for farming. About 95 percent of all lemurs are considered critically endangered.

Bradley and her graduate students have traveled to national reserves in Madagascar to observe lemurs. Post-doctoral scientist Rachel Jacobs recently developed a facial recognition system that can identify individual lemurs in the wild. And Bradley’s Science and Engineering Hall (SEH) lab has stockpiled lemur material—from thousands of photos to hair and fecal samples—that allows her and her students to use genetics to understand primate evolution. “But we don’t see ourselves as geneticists,” Bradley stressed. “We are primatologists at heart.”

Lauren Anderson’s Luther Rice project focuses on two lemur populations—one from the lush riparian forest, the other from the arid spiny forest—and their capacity for color vision. Lemurs are generally colorblind. But some females have been found to possess full color vision. That may be a huge advantage when searching for nutritious red fruits and leaves in the Madagascar jungle. 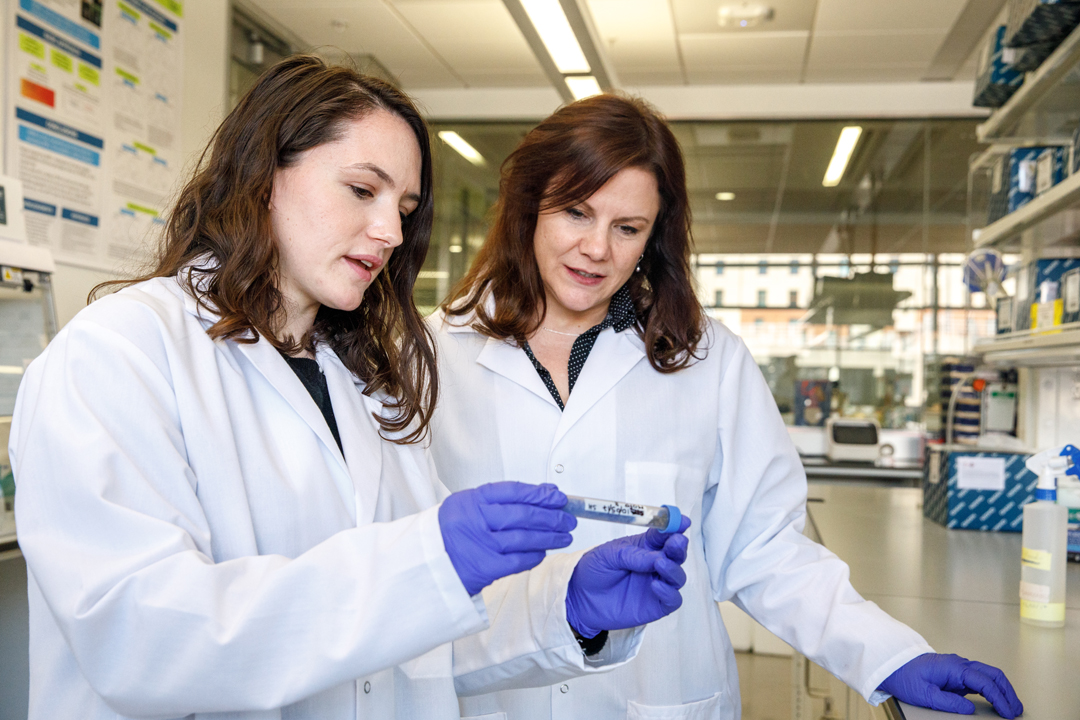 Females are dominant among lemurs. They lead the two- to 13-member groups on foraging missions. Anderson wants to know if color vision evolved in females to adapt to the needs of their environment. She’s extracting DNA from fecal samples stored in SEH freezers. She melts the samples under extreme heat and maps the melting patterns against known DNA sequencing for color vision.

Thea Anderson first devised her Luther Rice project after hearing post-doc Jacobs deliver a classroom lecture on photographing red-bellied lemurs in eastern Madagascar. Along with their chestnut brown coat, the males are distinguished by patches of white skin below their eyes. Anderson approached Jacobs after the lecture to ask if  the teardrop-shaped markings played a role in attracting mates, similar to the plumage of some birds. Jacobs wasn’t sure. “She said there wasn’t much research in that area and that I should come work at the lab,” Anderson said. “I was hooked!”

Anderson examined the photos of 120 different lemurs to calculate the size and area of the eye patches. She used DNA samples to confirm the male lemurs’ paternity—not unlike human paternity analysis. To her surprise, the research indicated that males with smaller patches have greater reproductive success.

Both students plan to continue their research after graduation. Thea Anderson will work at the nonprofit Women and Families Center in Connecticut before applying to medical schools. Lauren Anderson will track DNA in cancer cells at the Broad Institute of MIT and Harvard, a leader in human genome mapping.