A Legacy Comes to Life

The words, wisdom and remarkable legacy of “The First Lady of the World” is being brought to life through the painstaking work of the Eleanor Roosevelt Papers Project.
June 14, 2018 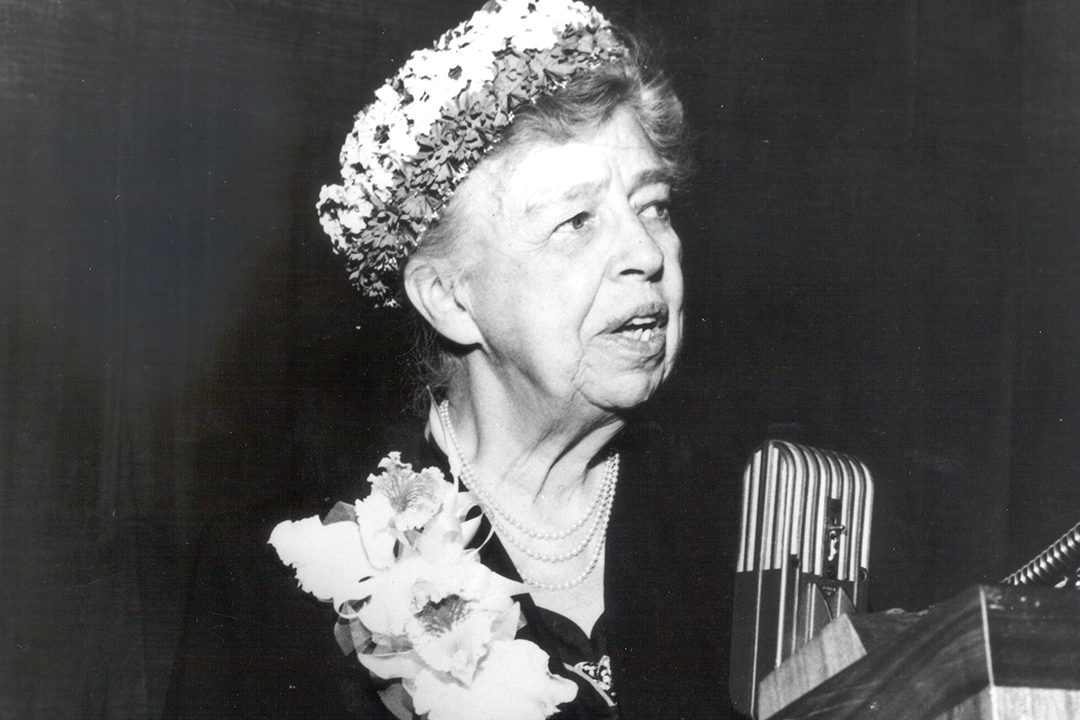 From the White House to the United Nations to the global political stage, Eleanor Roosevelt was arguably the most influential woman in American history. She was a towering figure through some of the nation’s greatest crises—including the Great Depression, World War II and the Cold War—and a lifelong champion of human rights, women’s rights and racial justice. And as a global representative for democracy, she made her mark not just as America’s first lady but, as Harry Truman dubbed her, the “First Lady of the World.”

Along the way, she amassed a prolific paper trail of words that included 8,336 newspaper columns, 27 books and nearly 600 articles. She also averaged 75 speeches a year, penned as many as 150 letters a day and hosted eight radio programs and three television shows.

So how do you go about creating a digital archive that encompasses the vast trove of Eleanor Roosevelt materials and makes them accessible to everyone from historians to schoolchildren?

For 18 years, that’s been the mission of the Eleanor Roosevelt Papers Project, a GW-chartered research center within Columbian College’s History Department. Funded primarily though grants from the National Archives and the National Endowment for the Humanities, the project scours the landscape of Roosevelt resources—from the Library of Congress in Washington, D.C., to the FDR Library in Hyde Park, N.Y., to international archives in Israel—to amass a permanent collection of her writings and speeches on democracy and human rights.

“Eleanor Roosevelt is such an important historical figure and she established an enormous written and spoken legacy,” said Project Director Christopher Brick, BA ’02. “But that also means there’s no way for any single researcher or historian to digest all of that material.”

Brick and his staff—including two other full-time editors, two PhD students and anywhere from 15 to 30 undergraduates and student interns—have amassed a wealth of historical resources from all phases of Roosevelt’s public life, from her marriage to FDR in 1905 (her cousin and then-President Theodore Roosevelt gave away the bride) to her death in 1962. But their work primarily targets her life and career from the time she left the White House. Those 17 years were among Roosevelt’s most productive, nearly eclipsing her time as first lady, but are, arguably, the least studied. They included her service as chair of the U.N. Human Rights Commission where she acted as the chief proponent and central architect of the Universal Declaration of Human Rights. Often characterized as an “ambassador-extraordinaire,” Roosevelt traveled the world and met with foreign leaders such as David Ben-Gurion in Israel, Jawaharlal Nehru in India and, twice, Nikita Khrushchev in the Soviet Union.

During that time, Roosevelt also continued to fervently campaign for civil and women’s rights, taking high profile stances to dismantle Jim Crow and oppose Joseph McCarthy. She challenged the nation to live up to the same ideals it espoused to the world. “Until we have complete equality of opportunity in every field, equal rights socially and economically, we cannot consider ourselves a real democracy,” she said.

Still, her post-White House years receive limited attention from scholars, Brick said. “Our historical memory of her is usually in her role as first lady, but that only captures a small part of the identity she assumes in American public life,” he noted. “Her career isn’t over by any stretch of the imagination when FDR dies. She continued to shape politics, international law and human rights.”

Founded in 2000 by retired Research Professor of History Allida Black, PhD ’93, the project’s initial goal was to publish a five-volume print edition of the most important papers from Roosevelt’s later political life. Volumes I and II—covering 1945-1952 and featuring, respectively, forewords by Hillary and Bill Clinton—were published in 2006 and 2012. The final three volumes are currently in production, with a recent $195,000 National Archives grant supporting the completion of the third installment which encompasses 1953-1955.  As the project evolved, its scope expanded to include digital initiatives and audio archives from Roosevelt’s entire public life, with staff and students spending “literally thousands of hours,” Brick said, uncovering, transcribing and reviewing Roosevelt recordings.

Currently, the project’s collection includes 100,000 documents, 500 audio and visual recordings and 5,000 photographs—not to mention three shelves of binders recreating Roosevelt’s daily schedule and 40 boxes of Christmas cards. The project’s website contains an expansive database where history lovers can find all of her more than 8,000 My Day newspaper columns and rare recordings like her radio address to the nation hours after the Pearl Harbor bombing.

“Honoring Eleanor Roosevelt's extraordinary record means making this material available to a broad swath of people—not just historians but students and anybody who wants to learn about this remarkable woman,” said Project Editor Christy Regenhardt, BA ’95. “Eleanor Roosevelt’s legacy is part of our American story, and these items are valuable pieces of American heritage.”

Through dogged archival detective work, Brick and his colleagues have uncovered one historical treasure after another—photos of Roosevelt with Tuskegee Airmen; audio conversations with Albert Einstein and John Steinbeck; records of a flight with Amelia Earhart where both women took the plane’s controls. Along the way, the staff has become intimately familiar with their subject, often feeling an emotional connection. “I’ve found myself searching through a collection of letters in our filing room and ending up sitting on the floor crying my eyes out over how moving their content is,” said Lee Febos, an undergraduate history major and student research assistant.

There is one historical record that eludes Brick and his team—the 3,000-page FBI file that details J. Edgar Hoover’s targeting of Roosevelt as a suspected Communist sympathizer. Most of the file has been declassified, but 12 pages remain redacted. Brick and the project are currently suing the federal government under the Freedom of Information Act for access to the missing pages, which most likely deal with Roosevelt’s trips to the Soviet Union in 1957 and 1958.

For Brick, Roosevelt’s continued relevance and influence in today’s environment is cause for celebration.. In 2013, the project was awarded a special designation by UNESCO as part of its historical heritage register. And in early 2017, Hamilton creator Lin-Manuel Miranda retweeted a Roosevelt quotation—"We have to get over our complacency and stop thinking that democracy is something we have achieved and no longer have to work for"—causing an immediate 500-follower boost for the project’s twitter account.

“Her voice is every bit as relevant today as it ever has been,” Brick said.

As chair of the U.N. Human Rights Commission in 1947, Roosevelt was the architect of the Universal Declaration of Human Rights.