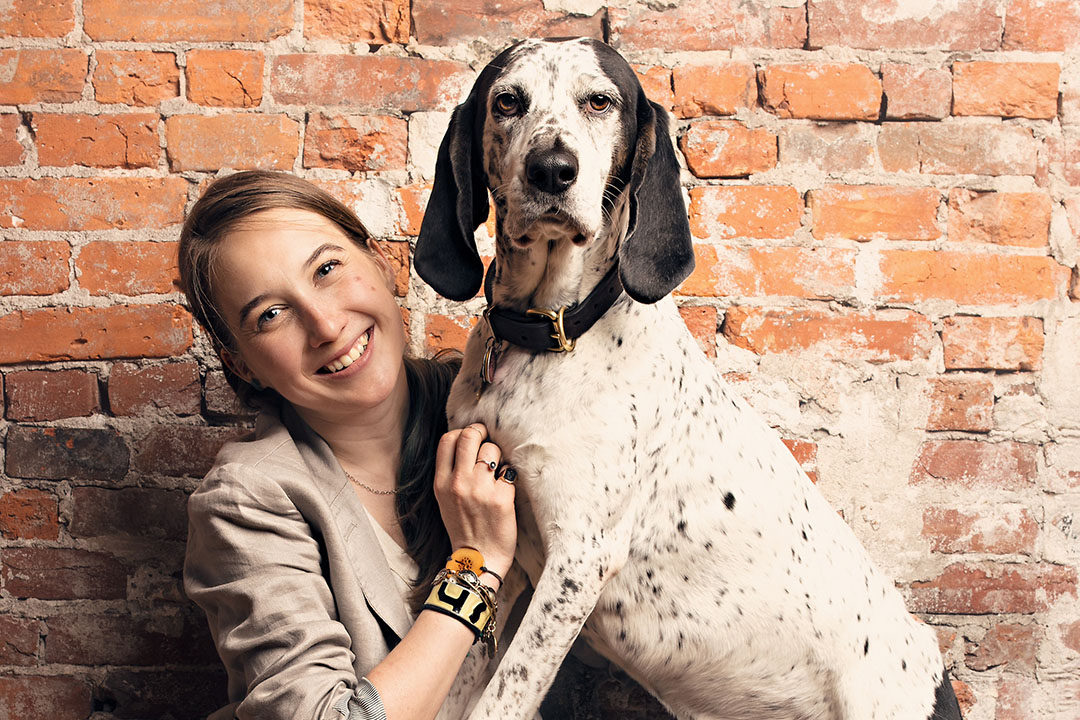 Long before we asked them to fetch tennis balls and shake for treats, dogs lived alongside early humans and watched us evolve for as many as 30,000 years. As they shared our hominin homes, our canine companions learned to communicate with gestures like raising their eyebrows and wagging their tails.

But those puppy dog eyes may have been telling us more than just when to scratch their bellies. Courtney Sexton, a fifth-year PhD candidate in the Department of Anthropology Center for the Advanced Study of Human Paleobiology (CASHP), believes our best friends can offer some of our best insights into how early human language may have evolved. In her research, she looks at whether dogs’ nonverbal signals could have mirrored our own developing communication skills.

“Most [anthropology] research comes down to the essential question of what makes humans humans,” she said. “I argue that, in some ways, we’re people because of dogs.”

No animals have shared our environment quite like dogs. “You don’t see such a unique model of interspecies interaction anywhere else in the animal kingdom,” Sexton said. But when researching the roots of human communication, studies have largely turned to non-human primate subjects—an obvious choice given our genetic links. Our closest living relatives, primates developed strategies to communicate wordlessly through features like their brightly colored facial patterns. They may raise a distinctive eyebrow, for example, to exaggerate an expression.

An evolutionary anthropologist and dog lover, Sexton noticed some of those same characteristics in her late pet Remy, a black and white hound with a playful personality and distinctive facial markings. Not unlike primates, dogs use their expressions, muscle movements and facial features to signal their needs. But since dogs’ behavior is often a response to human attention—in a sense, reacting to what they see in their owners—Sexton theorized that their mannerisms might be windows into our own communication development.

“Before we had language, we used other tools to communicate. And all that time, dogs were alongside us, watching,” she explained. “Did dogs hone into these [tools] and use them to communicate back to us? Are they giving us clues to how language emerged in our species?”

Sexton originally planned to study dogs with her collaborators at Harvard University’s Evolutionary Neuroscience Laboratory. But when the COVID-19 pandemic curtailed travel, she used social media, outreach events and word-of-mouth to collect more than 100 videos of dogs reacting to test prompts. With her new two-year-old hound Sonder at her side, she dissected thousands of frame-by-frame images across breeds. “I was floored by the response,” she said. During the pandemic, “a lot of people were stuck at home with their dogs and they agreed to become community scientists for this project.”

Associate Professor of Anthropology Brenda Bradley, Sexton’s thesis advisor, found the research trail fascinating, but was initially skeptical that it complemented the CASHP program’s focus on human/hominin evolution. “The evolution of sociality and communication in dogs is not a focal topic for us,” she laughed. But she soon realized Sexton’s work was “a stroke of luck” that bridged the expertise of several CASHP faculty— from Associate Professor of Speech, Language and Hearing Sciences Francys Subiaul’s work on the development of social cognition and Professor of Anthropology Chet Sherwood’s study of the evolution of communication skills to Bradley’s own research into the evolutionary basis of facial traits and pigmentation. “Our lab is interested in the evolution of these patterns in monkeys and lemurs but it parallels Courtney’s work on dogs,” she noted. “It has been hugely informative for the primate projects.”

Dogs have long been at the center of Sexton’s work and life, from the setters she grew up with to the therapy and rescue dogs she’s helped train. A former Mass Media Fellow with the American Association for the Advancement of Science and a writer for Smithsonian Magazine, Sexton has worked with the nonprofit Defenders of Wildlife on conservation campaigns for wolves, dogs’ canine relatives.

Her research has also made her a popular guest lecturer in GW undergraduate classes on human evolution and biological anthropology. She’s spoken to other area universities on topics from cognitive science to the mental abilities of animals. And she regularly hosts public outreach workshops to teach dog owners how to better understand canine behavior.

Indeed, Sexton hopes her anthropology research will prove equally valuable to animal welfare. By deciphering the signals dogs send us, Sexton envisions her studies leading to better training for service dogs and more success in placing shelter pets. “We always expect dogs to know what we’re telling them,” she said. “But if we can learn more about the messages they’re sending, we can actually help them as much as they help us.”

Sexton presented her research at the CCAS Three Minute Thesis Competition in March.