In Hunt for Zika Vaccine, Tiny Fruit Fly may be Missing Link

In an SEH biology laboratory, Ioannis Eleftherianos and a team of student researchers are putting the common fruit fly under the microscope in a global race against time to find a Zika virus vaccine.
September 14, 2016 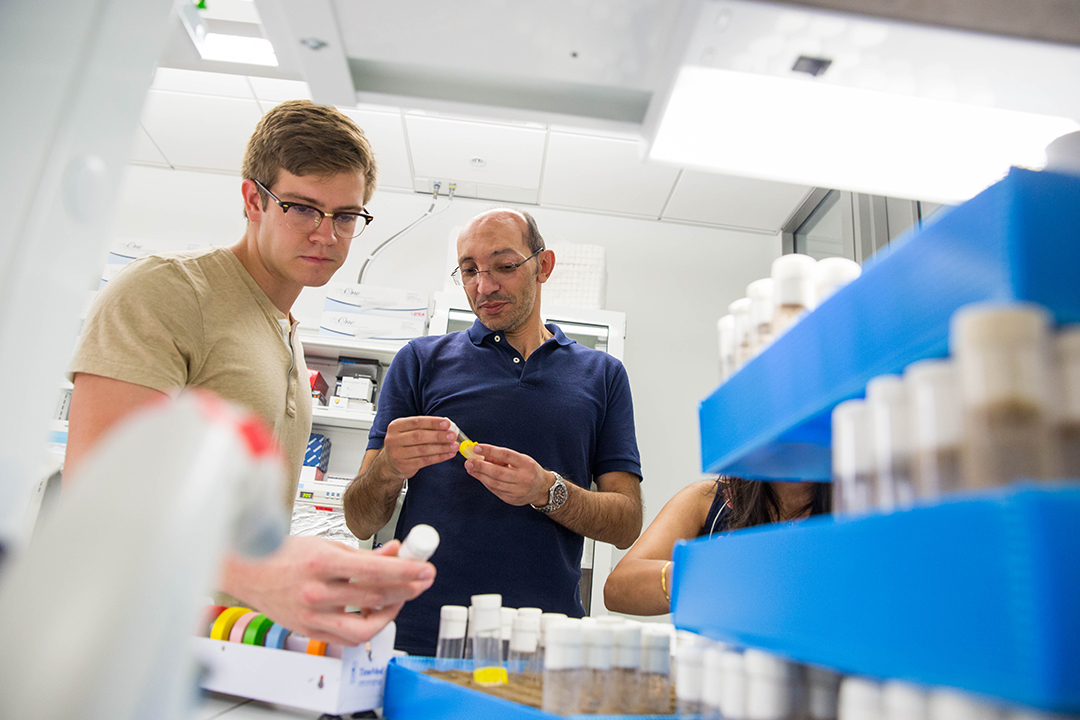 Its scientific name is Drosophila melanogaster—but it’s best known as the common fruit fly, the red-eyed, three-millimeter micro-pest that spoils summer picnics. But this seemingly insignificant insect is actually one of the most valuable organisms in biological research. It has been studied extensively for more than a century and is the subject of at least 100,000 scientific papers. Drosophila researchers have won four Nobel Prizes. Scientists have used the fruit fly to test Darwin’s evolutionary theories, develop new cancer drugs and understand diseases like Alzheimer’s and Parkinson’s.

Now, the humble fruit fly is under the microscope once again, this time to see if it holds the key to combating one of the most infamous diseases of our time: the Zika virus. Backed by a National Institutes of Health grant, Associate Professor of Molecular Biology Ioannis Eleftherianos and a team of student researchers are using Drosophila as a model to study the virus' transmission mechanisms and determine whether a Zika-infected host can devise a genetic defense. It’s the first step in the hunt for a vaccine to thwart the epidemic that has swept through more than 50 countries with seemingly no end in sight.

“Zika is on everyone’s mind right now in the science and research community,” Eleftherianos said. “There are so many things we don’t know about it. And the fruit fly is a very handy little insect for answering questions.”

The fruit fly has long been prized as a research organism because of its practicality; Drosophila is tiny, has a short life cycle of just two weeks and is cheap and easy to maintain in large numbers. Over the years, Eleftherianos has conducted countless Drosophila experiments, mostly involving host-pathogen interactions—the defenses a host develops to protect itself against a virus, bacterium or fungus and the way a pathogen evolves to overcome those defenses.  “It’s a very dynamic interaction," he said. "It’s like an arms race.”

Drosophila  became even more valuable in 2000 when its genome was completely sequenced. For scientists like Eleftherianos, who mostly concentrates on transcriptomics (the study of RNA transcripts produced by the genome), having a complete Drosophila genetic map at their fingertips gives them a blueprint for manipulating the fly’s physiology in response to pathogens like viruses and bacteria.

In some ways, however, the Zika project represents uncharted scientific territory for Eleftherianos. His research largely focuses on bacteria and parasites that are less well-known than the high-profile Zika. “Zika is the biggest thing we have worked on,” said Nate Bachtel, a senior chemistry major who has worked in Eleftherianos’ state-of-the-art biology lab in the new Science and Engineering Hall for the past year-and-a-half. Indeed, after decades of a scant number of Zika studies, Eleftherianos is well aware that labs across the country are now scurrying for breakthroughs. “There is a lot of competition,” he said. "Everybody is racing the clock."

Three years ago, Zika was a little known, ultra-rare virus. Fewer than 15 cases had been described in the scientific literature and it was believed to be so mild that researchers showed almost no urgency to identify drug candidates or create a vaccine. First isolated in 1947, the mosquito-transmitted infection—which is related to dengue, yellow fever and West Nile virus—was known to occur in Africa and Southeast Asia. Zika did not begin spreading widely in the Western Hemisphere until recently, perhaps as late as 2015.

Scientists still have more questions than answers about Zika, including how it infects human hosts and why most sufferers experience only than flu-like symptoms while Zika-infected pregnant women are at risk of giving birth to babies with a severe brain development condition.

Eleftherianos believes the fruit fly may provide the perfect model to test potential Zika treatments—particularly since its complete genetic code has already been mapped. “With the genetic code, we can essentially do anything we want,” Eleftherianos said. “We can suppress some genes. We can overexpress others. We can mutate them; we can create double mutants with more than one gene at the time. Anything.”

It may be particularly useful for studying Zika in humans. The human immune system bears some resemblance to Drosophila’s immune pathways with anywhere from 60 to 75 percent of human disease genes sharing equivalents in the flies. Eleftherianos also sees promising parallels between Drosophila and mosquitoes. Fruit flies and mosquitoes belong to the same insect order, Diptera. While the species diverged from a common ancestor some 250 million years ago, they still share similar physiological attributes and genetic information.

Perhaps most significantly, Drosophila is associated with microcephaly, the rare birth defect linked to Zika. Babies born with microcephaly have unusually small heads and are often stricken with severe brain damage. Little is understood about why Zika causes microcephaly and how the virus halts brain development. Eleftherianos can ignite microcephaly within fruit flies, creating a living laboratory for studying and manipulating genes to combat the disorder. “Understanding microcephaly in the fruit fly is a bridge to understanding it in humans,” Bachtel said.

For his NIH-funded Zika project—a $130,000 supplemental award to an already existing five-year $ 1.3 million general research grant—Eleftherianos estimates he and his team (a post-doctoral researcher, a graduate student and the undergraduate Bachtel) will spend a year studying the virus in fruit flies. The next step will be testing their results in other animal models, as part of a collaboration with Douglas Nixon, professor of microbiology, immunology, and tropical medicine at the GW School of Medicine and Health Sciences. Eleftherianos also plans to travel to Brazil to collaborate with a research institute studying host-pathogen interactions in mosquitoes.

“There are challenges ahead of us," he said, "but Drosophila is up to the task.”