Brittany Lewis competed for the Miss Black America title to raise awareness for racial justice and further her own doctoral research. The last thing she expected was to win.
October 11, 2017 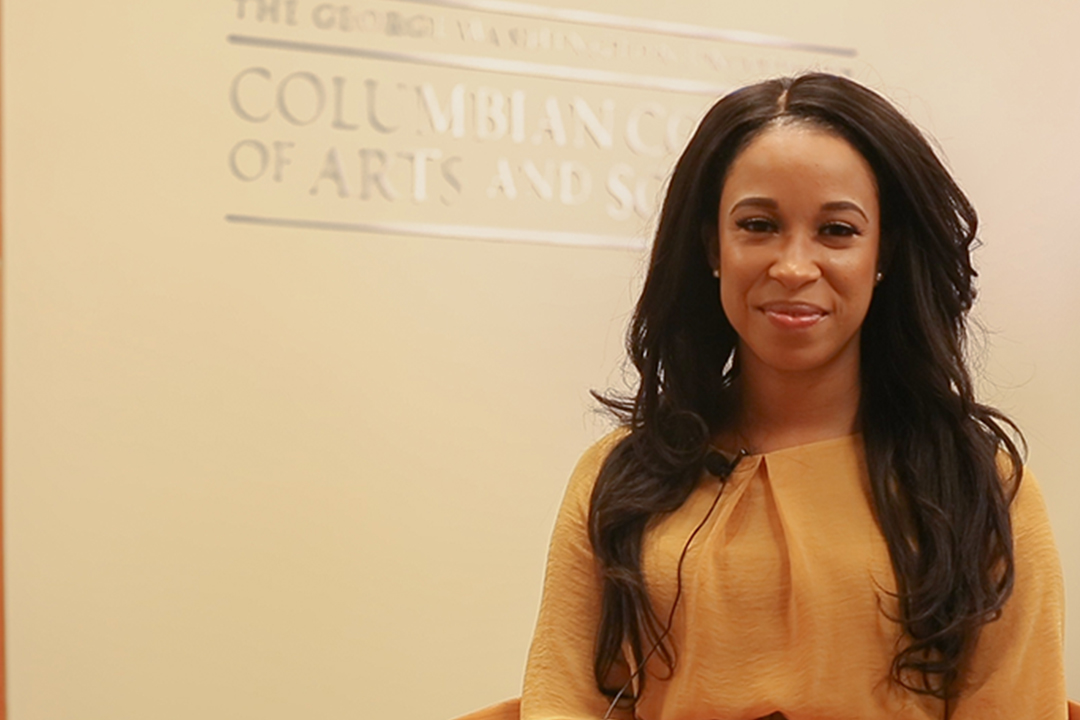 History PhD student and reigning Miss Black America Brittany Lewis has a message for anyone who believes the stereotype that pageant contestants are all-beauty and no-brains. “That is an old and insulting cliché,” she said. “It wasn’t true in the past and it’s not true now.” Indeed, on the night this summer when she won her crown, Lewis shared the Atlantic City stage with a Carnegie Mellon engineer, a professional ballerina, an MBA-holder who spoke four languages and a survivor of the Pulse nightclub shooting in Orlando.

“These are very intelligent, very accomplished young women who can hold a conversation with any graduate student or any professor at this or any other universality,” she said.

Lewis has an impressive resume of her own, including a two-year Teach for America position as a middle school instructor and a history of activism for causes such as preventing domestic violence. And, as a Columbian College doctoral student, Lewis received the History Department’s Herber Prize for the Best Graduate Student Instructor.

Lewis is now drawing on her pageant experiences as grist for her academic research, which is focused on African American and urban studies. Her dissertation on black history in Atlantic City examines how the Miss Black America pageant evolved in the late 1960s as a reaction to the then all-white Miss America competition—a concept Lewis calls “pageant-as-protest.”

“Not many people look at beauty contests as moments of historical significance,” she said. “Believe me, it’s even harder to see them that way when you’re actually in one!”

But Lewis has a skill for viewing almost any issue—from social justice to boardwalk pageants—through a scholarly lens. Even when she strode across stages in swimsuits and evening gowns, she kept her thoughts trained on the research potential, acting almost like an undercover historian in the pageant world.

“Brittany [Lewis] is a smart and insightful rising scholar,” said Associate Professor of History Erin Chapman. With her skill at drawing from her personal experiences, “as a public historian, Brittany will be in a position to educate a broad swath of society on crucial socio-political issues.”

Lewis first entered pageants as something of a lark. At 21, she hoped to garner the ample scholarship money many beauty contests award. At first, she failed to win crowns and sashes, but she still took home scholarship checks in categories celebrating academic achievements and interview responses. “I didn’t know what I was doing. I didn’t know where to stand or what to wear,” she said. “But I realized I didn’t have to be the best beauty queen to win some scholarship money. It was a great situation. I was having fun, making friends and earning for college.”

In 2014, Lewis represented Delaware in the Miss America pageant. While she didn’t win, she used the pageant as platform to promote domestic violence awareness. Working with former Delaware Governor Jack Markell and state and national nonprofits, she led the charge to declare October as Domestic Violence Awareness Month. Lewis, whose sister was killed in a domestic abuse incident in 2010, advocates for better awareness and action in presentations to legislators, college campuses and middle school classrooms.

“Every time I speak to a crowd, there’s someone who tells me that they or their mom or their loved one has experienced domestic violence,” she said. “Even in schools, young people say they can relate to my sister’s story and they recognize some aspect of it in their own lives.”

Lewis initially planned to retire from pageants after the Miss America competition. In 2015, she pursued her passion for history as a doctoral student, immersing herself in issues like radical movements and black feminism. Ironically, her research led her back to beauty contests.

Growing up near Atlantic City, which was home of the Miss America pageant, Lewis was well aware of the pageant’s history. The Miss Black America pageant was founded in 1968 by Philadelphia activist J. Morris Anderson as a protest against Miss America’s history of racial discrimination. The pageant’s infamous “Rule No. 7” specified that “contestants must be of good health and of the white race.” Although the rule was repealed in 1950, it wasn’t until 1971 that an African American competitor appeared in the national pageant. No black woman won the Miss America crown until Vanessa Williams in 1984.

“That first Miss Black America pageant was a fascinating moment in history—both for African Americans and women,” Lewis noted. At the same moment that feminist groups demonstrated outside the Miss America pageant, across the boardwalk black women staged their own form of protest. “They held a pageant to celebrate black womanhood and black beauty,” Lewis said.

That confluence of ideas and activism sparked Lewis’ scholarly curiosity and inspired her to return to the pageant world—this time following in the footsteps of former Miss Black America contestants like Oprah Winfrey, actress Bern Nadette Stanis and singer Toni Braxton. While maintaining her GW course load, Lewis won a D.C. qualifier and then competed at the Miss Black America finals where she wowed the judges with a dance routine choreographed to an interview with acclaimed performer and civil rights activist Nina Simone.

During her one year reign as Miss Black America, Lewis plans to spearhead initiatives that are close to her heart, including African American education and domestic violence awareness, with organizations like the Congressional Black Caucus and the Obama Foundation. She will also be making appearances at the NAACP Image Award and the BET Music Awards ceremonies. After she passes the crown to next year’s winner, Lewis says she’ll take advantage of one of her prizes—an all-expense paid trip to anywhere in the world—to visit Ghana for another research project. “Being a pageant winner is fun and exciting,” she said. “But I will always think of my real title as historian.”