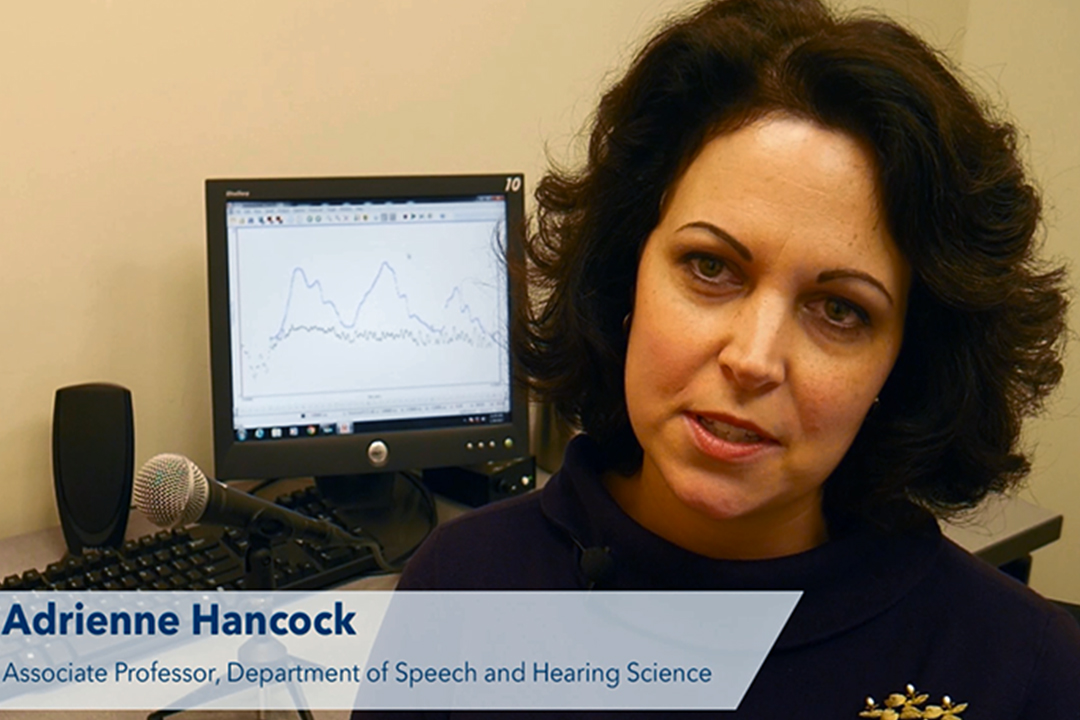 When 15-year-old Lisa (not her real name) walked into the George Washington University Speech and Hearing Center, she looked and acted just like most other 9th grade girls. But like many transgender people, she felt there was an obstacle blocking her path to portraying her gender identity: her voice.

“I want to sound more like a girl,” she told Adrienne B. Hancock, associate professor in the Department of Speech and Hearing Science and a certified speech-language pathologist.. Lisa explained that she was home-schooled during her transition because a teacher had bullied her at public school. Before returning to school, she said, she wanted to feel confident about her feminine voice.

Like she often does, Hancock asked Lisa what famous person she wanted to sound like. Hancock expected her to mention someone with a high, lilting tone like Taylor Swift. Instead, Lisa singled out Kari Byron, the host of TV’s Myth Busters, a woman whose voice pitch was lower than Lisa’s. She acknowledged feeling powerless since the transition began and wanting to sound cool, confident and smart—like Byron.

Hancock has spearheaded both research and clinical advances in transgender voice and communication since arriving at GW in 2005. But listening to Lisa brought a revelation to the speech-language pathologist. Most treatments focus on raising pitch and modifying speech tone and intonation patterns to align with typical adolescent female speakers, according to international standards and care and evidence-based practice guidelines. “But I listened to her additional need to express her power and confidence as a young woman,” Hancock said. Even though she was transitioning to present herself in her genuine female gender identity, Lisa didn’t want to conform to a stereotype of a young female voice—and Hancock let those wishes guide the direction of treatment. “She reminded me that cultural competence is a necessary compliment to clinical competence,” Hancock wrote in her Perspectives on Voice and Voice Disorders article “The Role of Cultural Competence in Serving Transgender Populations.”

Since switching her specialty from Parkinson’s-related cognitive deficits a decade ago, Hancock has worked in research labs, the GW Speech and Hearing Center and local transgender support groups to help transgender people  understand and find satisfaction with their voice. Her research on the role of voice and communication in gender transition led to a landmark $300,000 grant from the National Institutes of Health. That project involved characterizing the physiological mechanisms of a speakers voice that facilitate a listener correctly perceiving the gender of that speaker as—in Lisa’s case—a female. More recently, Hancock and a group of undergraduate and graduate students launched Access and Barriers to Communication Services (ABCs), a project to identify barriers to voice services experienced by the most marginalized-of-the-marginalized: transgender people of color. “I want students and practicing speech-language pathologists to be able to provide services in the real world, where cultural influences of gender, age, race and class intersect,” says Hancock. “But right now we don’t know enough about all the nuances and subgroups of the transgender and gender non-conforming populations to determine if we are serving them well—or how we could serve them better.”

Hancock classifies her research as “translational”—applying foundational concepts and techniques to real-world situations. In her basic research, she might look, for example, at how the vocal folds of a transwoman achieve a feminine sound, she explained. “But then I translate that into clinical research, where I sit down face–to-face with a real live person and use my knowledge of physiology to help them get a voice that feels genuine to them.”

In the past, speech-language pathologists might have guided clients toward a binary view of how a masculine or feminine voice might sound. “We used to work like we were going down a checklist: raise the pitch above a certain level, change the resonate tone, work on intonation,” she noted. But over the years, therapists have moved toward a more patient-centered, individualistic approach. “It’s important with any voice clients—particularly trans clients—to understand who they are, to make sure you are giving them the voice that’s theirs, not some ideal packaged voice that I might have as a clinician. What I do now is find the right recipe for each person.”

Like Lisa, transgender people often see their voice as among the most difficult characteristics to change, but also one of the most important. Hancock hears clients say they are afraid to open their mouths in public because the sound of their voice doesn’t match the person they really are.

“For a lot of our clients, having a voice that aligns with their gender identity is life-giving,” she said. “That sounds dramatic, but I’ve had people tell me that without a successful voice modification, they wouldn’t have their jobs.” Clients also routinely relay how changing their voice provided a layer of safety from discrimination and physical threats.

But how do you train a voice to align with a gender that is different from the one you were assigned at birth? It’s a long and effort-intensive process, one that’s particularly difficult for males transitioning to females. Most transgender men—people assigned the female sex at birth but identifying as male—can develop deeper voices by taking testosterone. But for transgender women, estrogen hormone treatment has little to no effect on the voice. That is why transwomen like Lisa—and, Hancock says, 10 to 30 percent of transgender men—rely heavily on voice  treatment with speech-language pathologists or voice coaches.

“It definitely requires a lot of practice and there are a lot of ups and downs, but the women we work with at the clinic are very motivated to put in the time and effort,” said Alyssa Giegerich, a first-year speech-language pathology graduate student. “Helping them get there can be both incredibly frustrating and incredibly exhilarating.”

Hancock stresses to students that, in addition to helping transgender people overcome physiological challenges, their job is to be mindful of each client’s personal circumstances. Some, like Lisa, have a clear idea of how they want to sound—even if it doesn’t conform to society’s or even the therapist’s expectations. Others have strong emotional ties to their original voice, even as they voluntarily choose to change it. “When they lose their old voice, they lose their old identity, and often they need to mourn that loss," Hancock said. “Fortunately, they can celebrate this new identity when their voice finally matches their authentic selves.”

By the end of a successful round of therapy—whether or not the clients have met their original expectations—Hancock says more than just a person’s voice has changed. When comparing pre- and post-therapy videos, she has seen more lively facial expressions and confident body language. And she’s always struck by the clients’ intense gratitude.

“You might think that the voice is such a little part of everything going on in their lives as a result of gender transition. But when people are so grateful, I realize it fills a deep need,” she said. “I learn so much from them about coping with life. I feel honored to be able to help in return.”