On the Frontlines: Alumna Wages War Against Cancer

In her first year as CEO of the American Cancer Society, Karen E. Knudsen, BA ’90, has crossed the country to join scientists, lawmakers and caregivers in a fight against the nation’s second-leading killer.
September 14, 2022 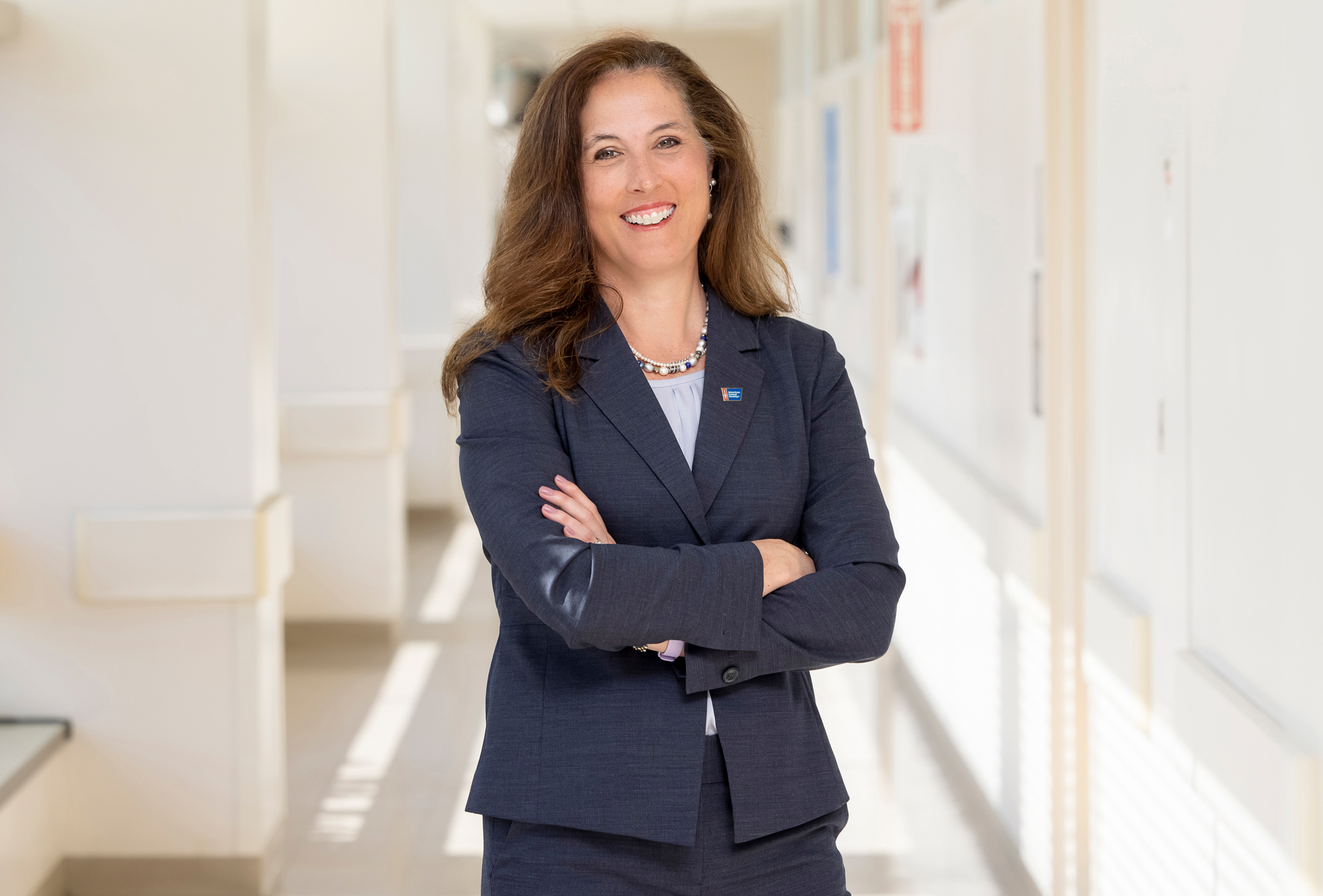 Since becoming chief executive officer of the American Cancer Society (ACS) just over a year ago, Dr. Karen E. Knudsen, BA ’90, has spent more time on the road than in her Philadelphia home. Her color-coded calendar is marked for each stop on her itinerary as she races to stay one step ahead of the nation’s second-leading killer.

One of the most influential voices in cancer care, ACS is a nonprofit research, advocacy and patient support organization with a presence in all 50 states and Puerto Rico. In her first year as CEO, Knudsen has traveled to cancer centers across the country. At the ACS science offices in Atlanta, she monitors a nationwide network of federally funded labs. Through its lobbying arm in Washington, D.C., she advises lawmakers on the Hill and in the White House.

It’s a wearying schedule, one that often keeps her away from her husband and her two college-aged sons. But each day, Knudsen finds inspiration by speaking with people whose lives have been touched by cancer—from survivors who share recovery tales to patients nearing the end of their fight.

“Some have stories of real hope and others of tragedy,” Knudsen said. “Our goal is turn the tide of cancer so we are writing more of the hope stories than the tragic ones.”

Knudsen came to ACS at a crossroads in the cancer landscape. One in two men and one in three women in the United States will have a cancer diagnosis in their lifetime—with two million new diagnoses and 600,000 deaths each year.

In some ways, however, the battle has been characterized by a string of victories. Mortality rates have declined by more than 30 percent since the 1990s, led by research breakthroughs, enhanced screening and detection and rising commitments to funding and patient support services.

But Knudsen took office in the midst of enormous challenges, including a COVID-19 pandemic that caused more than 9 million Americans to delay cancer screening. Each new breakthrough has also made the science of cancer care more complex, she said, and sporadic access has limited the reach of lifesaving technology.

“Ultimately, the way we will solve cancer is through research and advocacy; research gives us the breakthroughs and advocacy gives us the access,” she said. “The two always go hand-in-hand. Discovery alone is not enough.”

Within the cancer community, Knudsen may the perfect person on center stage at the perfect time.

She is the first woman CEO in ACS’s 109-year-old history, and the first basic scientist and director of a cancer center to lead the organization. Before coming to ACS, Knudsen was the executive vice president of oncology services and enterprise director for Sidney Kimmel Cancer Center at Jefferson Health in Philadelphia—one of 71 National Cancer Institute (NCI)-designated centers recognized for their impact on cancer outcomes. As a scientist, her work on advanced prostate cancer have resulted in new treatments for one of the deadliest forms of the disease.

“I think it helps me as a leader in this organization that I have had an entire career focused around understanding the link between research and human health,” she said. “I can translate knowledge from the laboratory into the clinic.”

Knudsen credits GW with nurturing her passion for research. As a biology major, she planned to attend medical school until professors and advisors suggested she apply for a position at NCI, part of the National Institutes of Health. Knudsen instantly fell in love with the lab. “It made me think differently about where I saw my life in science,” she said.

GW was also instrumental in developing the leadership skills she has employed throughout her career. As an officer with her sorority, she frequently organized alumni events that brought successful professional women to campus. And going to school in the heart of the nation’s capital introduced her to the political world.

“In so many ways, being at GW was a prelude to everything I do now,” she said. “I loved the biology program and the opportunity it gave me to work closely with researchers. I met alumni who were highly skilled in the business world. And living in the city prepared me for what it’s like to lead a nonprofit that has political advocacy as one of its mission pillars.”

In her numerous roles with ACS—she is CEO of its advocacy affiliate, the American Cancer Society Cancer Action Network, and sits on the boards of NCI and 12 of its designated centers—Knudsen finds herself telling two different stories about the future of cancer.

She prefers to emphasize the positive developments. Earlier this year, for example, she attended a White House ceremony where President Biden announced a renewed commitment to the Cancer Moonshot, a marshalling of federal government resources to speed research progress and reduce death rates by 50 percent over the next 25 years. ACS, the largest funder of cancer research outside the U.S. government, has contributed $3.1 billion since 1991.

But Knudsen is quick to note that each cancer discovery has also led to new questions and challenges. Researchers have now identified 200 different kinds of cancers—including five forms of breast cancers—all biologically and clinically distinct and requiring their own unique therapies. “Ironically, the smarter we get, the more cancers we have,” she said. “We’re making strong progress against many of those 200—and there are others that are just not well understood right now.”

Meanwhile, Knudsen said there’s evidence that the delayed screenings linked to COVID-19 are already resulting in increased late stage diagnoses. “That’s frightening because certainly the best chance of survival is with early detection,” she said. She has also targeted access barriers from addressing racial and economic disparities to overcoming logistical hurdles. ACS offers day-to-day patient support services such as rides to treatment and lodging near cancer centers.

And she has campaigned to improve health literacy so patients can better understand their treatment and more proactively coordinate their care regimen. “We are actively leaning into strategies to empower patients and families to be their own best health advocate,” she said.

Throughout her whirlwind first year at ACS—and the miles she’s logged visiting scientists, politicians and patients—Knudsen maintains she has seen more reasons for hope than despair. “With every lab I walk into, every cancer center I visit, every person I meet with, I can firmly say I see us improving lives every day,” she said.

Much of her optimism, she said, comes from watching the next generation of young cancer professionals—many of whom remind her of her research days at GW. “They’re dedicated to using their knowledge, their creativity, their innovative strategies to get to the point where we need to be,” she said, “where we end cancer as we know it.”