Exploring the Nature of Evil

In her Dean’s Seminar, Laura Papish leads first-year CCAS students in philosophical discussions on the nature of evil and its impact across generations.
December 14, 2022 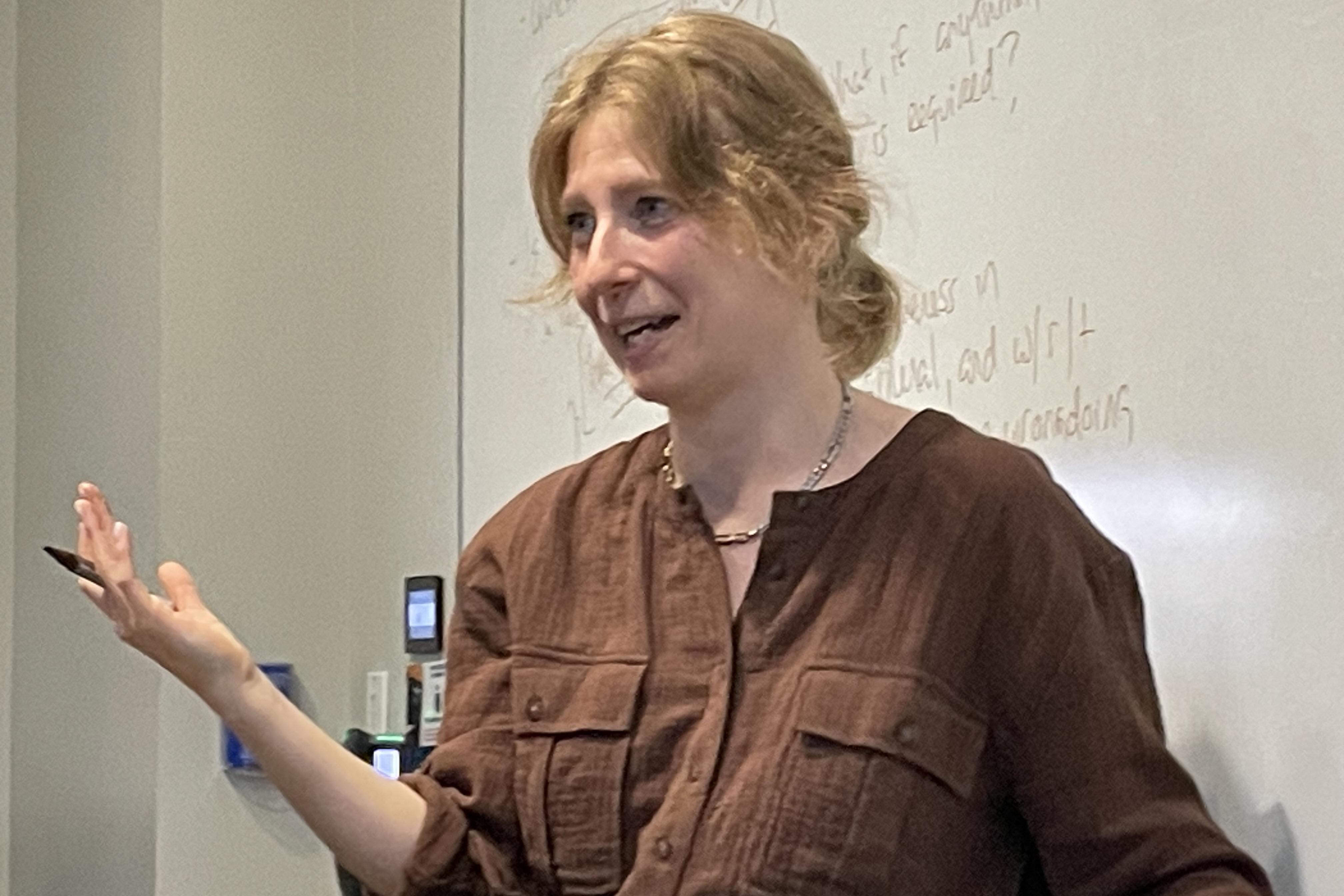 Associate Professor of Philosophy Laura Papish teaches a Dean’s Seminar on the Philosophy of Evil.

When students step into Associate Professor of Philosophy Laura Papish’s Dean’s Seminar on the Philosophy of Evil, they quickly learn two important lessons.

First, as the class name implies, they will be discussing difficult questions about the nature of evil—from how atrocities can ever be forgiven to whether the existence of evil casts doubt on the existence of God.

And, second, there will be no easy answers—if there are any answers at all.

“This class is more about figuring out what the questions are than answering them,” Papish said. “That’s the way philosophy works. We try to leave a lot of things unsettled.”

How does a society define evil? Is the term reserved for the Holocaust and other genocides? Do we encounter evil in our daily lives? And how do we account for factors such as a person’s intent or the environment they come from?

Those are weighty topics, Papish concedes—particularly for a class that, like all Dean’s Seminars, consists entirely of first-year students. Many of Papish’s students have never taken a philosophy course before. And along with the complex emotional discussions, the Evil class features challenging texts like Herman Melville, the classic study of Nazi war crime-trials Eichmann in Jerusalem and the 4th century writings of St. Augustine.

But Dean’s Seminars are designed around focused scholarship on topics that are relevant to our time. They can often be as edgy as they are engaging. And Papish’s students said the difficult debates and discussions on provocative topics are exactly what they like about the class. “The way philosophy makes you stretch your thinking and open up your mind is both interesting and beneficial,” said Kamini Waldman, who, thanks to her experience in Papish’s class, is considering a philosophy minor. “I joke with friends that philosophy is the only subject where it’s acceptable to answer a question with another question.”

Throughout the class, the 19 first-year students debate questions such as whether acts of genocide in Bosnia and Rwanda can be compared to President Harry Truman’s decision to detonate two atomic bombs over Japan. They look at case studies such as the infamous 1971 Stanford Prison Experiment, where normal people were asked to simulate the roles of guards and prisoners—until the citizens acting as guards began psychologically abusing the mock prisoners. Discussions have centered around topics such as morality responsibility, whether good people can do evil deeds and if free will exists at all.

“We consistently draw mind-blowing conclusions that I’d never considered before,” said Millie Wallach, who plans to double major in human services & social justice and communications. “I have never had a class that required me to form opinions on things that are so much larger than myself.”

In her second consecutive year of teaching the seminar, Papish understands that most of her students have little experience with evil events in their lives. “We are very lucky to have sufficient distance from the things floated as meaningful examples” like the Holocaust, she said. Still, many students have already considered tough philosophical questions in their lives, she explained, like reconciling the concept of a just God with the existence of evil. “They do wonder: How could there be a God when there are, for instance, young people suffering from cancer?”

And while the class discusses acts of evil on an epic scale, it also burrows into moral quandaries inherent in relationships and professional lives—topics Papish’s students can often relate to. “Even if they haven’t been privy to something they would call evil, they’ve been, for example, wronged by friends or partners in various ways. So questions of forgiveness are already on the tip of their tongue.”

Papish asks that the class keep an open mind when discussing volatile subjects and be mindful that philosophy classes involve working through difficult ideas. “People are going to say things they want to take back—and that’s totally fine,” she said. “The point of the class is that we all learn how to do philosophy together.” And no matter how serious the topic, the classroom discussions never become overly gloomy. “Believe it or not, a lot of times when we end up talking about especially grim things, we use humor as a way to make the space more comfortable for everyone,” said JD Palmer, an English major who has already enrolled in another Papish-taught philosophy class for the spring. “I don’t think there’s ever been a time where people have been nervous to talk about a depressing topic.”

Papish believes that in a class like hers, “the subject matter is a bit subservient to the skillset” as she guides students to learn how to think like philosophers. Over the course of the semester, Papish said she’s seen her students sharpen their critical thinking skills and learn how to articulate well-reasoned arguments. “The ultimate goal is that I come away from a student’s paper and I learn something that I hadn’t thought about before,” she said.

As the class comes to a close, Waldman said she’s learned to appreciate the ambiguity inherent in philosophy. “I expected to come out of this class with a clear-cut definition and understanding of what evil is and how it manifests itself in the world—but that’s not philosophy,” she said “Philosophy exists because there will always be unanswered questions and we need people who will try to make sense of them—and even if every person will try do it in a different way.”