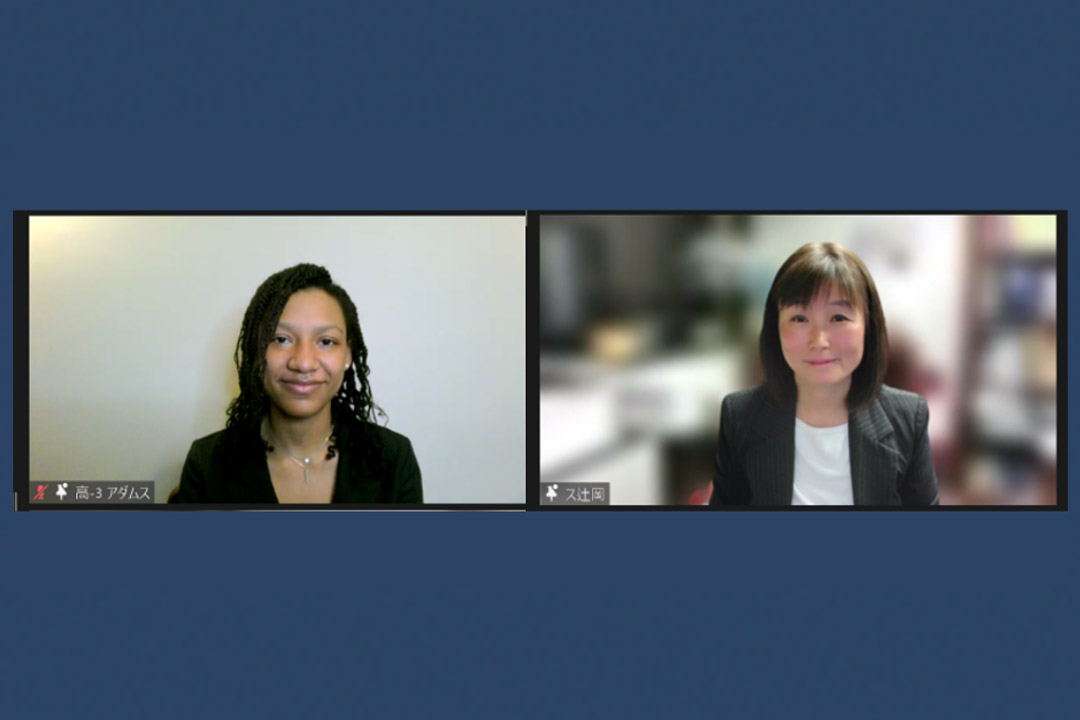 Held online for the second consecutive year due to the COVID-19 pandemic, the J.LIVE Talk finals featured nine students chosen from 54 applicants hailing from 12 states and the District of Columbia. More than 500 viewers watched the November 13 final round live on YouTube with another 200 tuning in within 24 hours. The event was organized by the Columbian College of Arts and Sciences’ (CCAS) Department of East Asian Languages and Literatures, with assistance from the GW Japan Resource Center. Assistant Professor of Japanese Language and Literature Brendan Morley and Japanese Language Lecturer Mami Ichikawa served as hosts.

“J.LIVE Talk is not just a foreign language presentation contest. It functions as a nexus for advocacy activities promoting Japanese language education in the United States,” said EALL Department Chair Shoko Hamano. “Not only did Shaina gain greatly from Professor Tsujioka’s mentoring, her presentation will definitely be a good model for other high school students studying Japanese.”

In 2020, J.LIVE—Japanese Learning Inspired Vision and Engagement—opened its contest to high school students. With Tsujioka as her faculty advisor, Adams gave a presentation on light pollution titled “The Night Sky: A Magnificent View.” The panel of judges—including a representative from the Japanese Embassy, an executive from the Tokyo Electric Power Company and Chair of the CCAS Department of Sociology Hiromi Ishizawa—selected her for the first place Gold Award and a $300 cash award. In addition, college-level Gold Award winners also earned the opportunity to participate in an intensive Japanese language program in Japan in summer 2022, with tuition, airfare and living expenses covered by J.LIVE Talk.

“To me, winning the competition is a lot of validation in the effort that I have put into the language so far and even more motivation for me to continue working hard in order to improve,” said Adams, who participates in Tsujioka’s course through DC Public Schools’ dual enrollment program because her home school does not offer Japanese instruction.

After viewing their online presentations, the judges evaluated each students’ interpersonal skills through a rigorous question-and-answer session in Japanese. Audience members also asked the presenters questions in Japanese via YouTube’s live chat. The impromptu exchanges tested the participants’ abilities to articulate effectively in Japanese, Hamano noted.

For students like Adams, J.LIVE Talk offers an opportunity to sharpen their communication skills while sharing cultural experiences, event organizers noted. With Japanese ranking among the top foreign languages studied in the United States, the competition encourages students to expand their linguistic skills while exploring Japan’s global industrial and cultural influences.

The addition of the high school division, Tsujioka said, helps raise the visibility of Japanese language education in the United States and foster the next generation of Japanese speakers. “I am glad that GW had a platform for [Adams] to shine as she is truly a gem, and hope her winning the Gold Award will encourage others to pursue their interest in Japanese,” she said.

Adams, who has studied Japanese for four years, plans to continue perfecting her command of the language in college. “Learning Japanese has been such a fun experience and pastime of mine,” she said. “I can’t imagine ever parting with the language.”