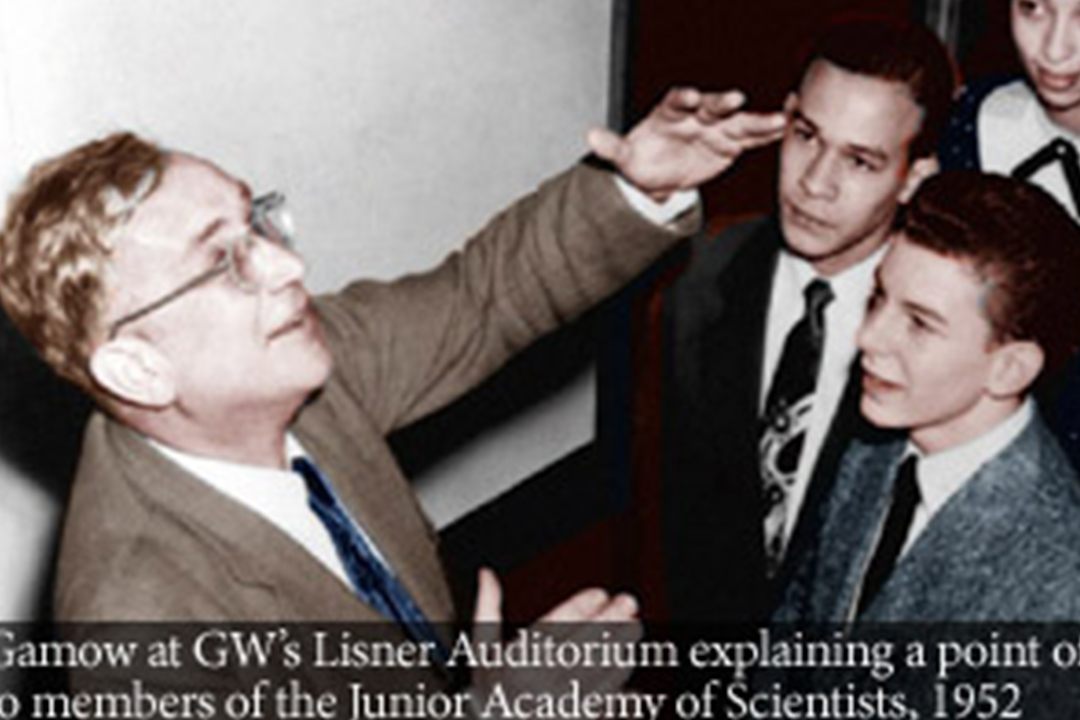 Most defenses of physics dissertations attract less than a dozen in the audience. That was not the case 64 years ago this month when Ralph Alpher's defense attracted three hundred, including representatives of the press and members of the faculty in full academic regalia. Word had spread that a new theory of the origin of the Universe would be described. The theory was developed under the guidance of GW Professor George Gamow, who was already renowned when he arrived at GW in 1934 for his innovative ideas in the new field of nuclear physics and, subsequently, for his animated public lectures.

The seminal paper outlining the new theory was published as a letter to the Physical Review on the first of April, 1948, with the title, "On the Origin and Relative Abundance of the Elements," with the authorship "R.A. Alpher, H. Bethe, G. Gamow''. The addition of Hans Bethe's name could not be resisted by the wag in George Gamow, who liked the echo with the first three letters of the Greek alphabet. Bethe, who was the first to explain the energy production in the Sun, was a close friend of Gamow's, and agreed to being included on the paper, saying that "it may even be right!."

The "αβγ" paper applied Einstein's General Theory of Relativity and the new relativistic quantum theory to describe an evolving Universe with a finite beginning. In the fully-developed theory, near the beginning of time—about 14 billion years ago—the gravitational energy of a small newly-created Universe converted into a hot plasma of particles and light as space itself rapidly expanded, and matter cooled. In the hands of Alpher and his colleague Robert Herman, the theory made two historically-important numerical predictions: The relative amount of helium to hydrogen (1 to 3 by mass) in the Universe, and the existence of microwaves at about 3 Kelvin left over from the time when the Universe became cool enough to make atoms.

By 1948, astronomers had measured many of the abundance ratios of elements in stars. Those for hydrogen and helium agreed with the prediction of Alpher and Gamow. But with competing models and philosophic resistance, the Hot-Big-Bang theory languished.  In 1965, the rather accidental finding of a background microwave thermal radiation across the sky at 3 Kelvin dramatically confirmed the prediction of the theory, and led to a Nobel Prize in 1978 for Penzias and Wilson, the Bell Lab discoverers. By then, Gamow had passed away.

How did the theory gain the moniker “Big Bang”?  In 1949, on a BBC broadcast, the astronomer Fred Hoyle, who had his own rival "steady-state" theory, called the work of Gamow and Alpher the "Hot-Big-Bang Theory.'' Even if disparagingly devised, the title stuck.

George Gamow was brought to GW by President Cloyd Heck Marvin, who realized that the sciences would benefit from a prominent expert in the new quantum theory. With one, he got two: Gamow would come only if he could bring Edward Teller. By engaging Gamow, Marvin further strengthened the Columbian College faculty with a wonderfully versatile and inventive thinker. Gamow not only continued to contribute fundamental ideas to nuclear physics, but also to astrophysics and even biophysics.

In 1956, Gamow wrote a letter to the pioneer investigators of the structure of DNA which began, "Dear Doctors Watson and Crick: I am a physicist, not a biologist, and my interest in biology can be justified (if anything) only by my recently published book Mr. Tompkins Learns the Facts of Life. I am very much excited by your article in the May 30th Nature and I think this brings biology over into the group of exact sciences..." Gamow was eager to figure out how DNA encodes the proteins of life, and published the first paper on the subject. The DNA model Gamow built to aid his thinking was given to GW by biophysicist Alexander Rich at the George Gamow Symposium held at GW in 1997.

In a video for the Gamow Symposium, the late Edward Teller said, "When I think of my dear friend George Gamow, I think of the simple, beautiful, straightforward ideas of physics for the sake of the great pleasure that physics and understanding can give to all of us."