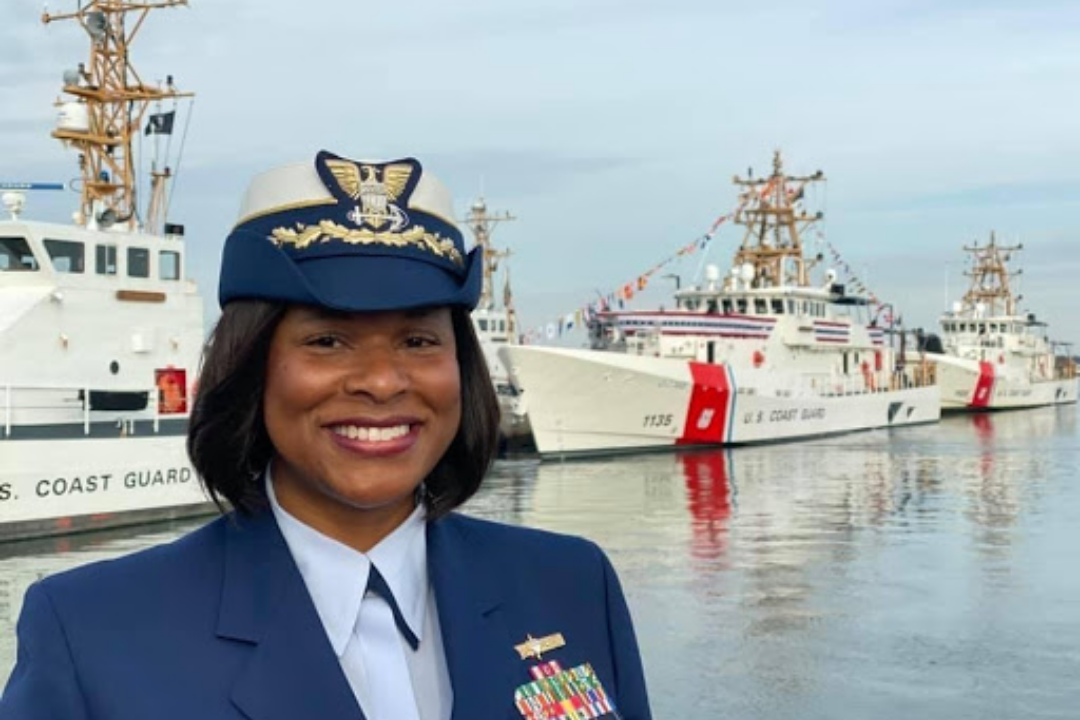 Captain Zeita Merchant, MPA ’10, is the sector commander for the U.S. Coast Guard Sector New York, the largest port on the East Coast.

The U.S. Coast Guard Sector New York is the largest port on the East Coast—and likely the most consequential in the nation. It stretches from Sandy Hook, N.Y., up the Hudson River to Albany. Along the way, it covers the largest ferry system in the United States, the second largest container port, the busiest route for refined petroleum products and the third largest cruise market.

Captain Zeita Merchant, MPA ’10, is responsible for keeping the massive marine system secure. As the unit’s sector commander, the first African American woman to ever hold that post, she oversees a nearly 1,000-person staff patrolling the heavily trafficked waterway. “What we do here not only affects the Northeast, but the entire nation,” she said. “It’s like conducting an orchestra except the symphony is the complex activity on the waters.”

Merchant is a trailblazer—and part of a tradition of GW alumni excelling in the Coast Guard. For more than 30 years, the Coast Guard has offered competitive scholarships for high-achieving personnel to attain a master’s of public administration. Throughout that time, Columbian College’s Trachtenberg School of Public Policy and Public Administration (TSPPPA) has been a premiere destination. More than 60 Coast Guard officers have earned their degrees at TSPPA, among them two current admirals and three retired admirals including Thad W. Allen, MPA ’86, who led the service from 2006 to 2010 as its 23rd commandant.

“As an elite leadership development program, [TSPPPA] has enjoyed a close relationship with the Coast Guard,” said Kathryn Newcomer, professor of public policy and public administration. “One of the most rewarding aspects of being a faculty member in our school has been instructing our Coast Guard officers inside the classroom and seeing how their careers have progressed.”

Merchant is only the third African American female to attain the rank of captain—the Coast Guard’s version of a colonel—in its 231-year history. Among her leadership roles, she’s served at the service’s headquarters in Washington, D.C., as a special assistant to the vice commandant, and as a Military Congressional Fellow for the U.S. House of Representatives. In 2017, she was the incident commander overseeing the Coast Guard’s hurricane recovery efforts in Texas and Puerto Rico.

“The Coast Guard and GW have given me the opportunity to be at senior levels in very historic positions, doing something that I love and that I’m passionate about,” she said.

Merchant credits fellow GW alumnus Allen as a professional mentor. During his nearly 40 years in the Coast Guard, Allen, a 2006 GW Distinguished Alumni Achievement Award winner, headed the government’s response to Hurricanes Katrina and Rita, as well as the 2010 clean-up of the Deepwater Horizon oil spill in the Gulf of Mexico.

Likewise, Merchant has offered support to other TSPPPA alumni, including Lieutenant Commander David Ruhlig, MPA ’18, who was recently named commanding officer of the Coast Guard Station New York. Merchant presided over his change-of-command ceremony. “The strong linkage between the Coast Guard and GW really highlights the value of the educational experience,” said Ruhlig, who leads a 139-person team at the nation’s largest and busiest boat station. “What better way to learn how to best serve the public trust than through the art and science of public administration—and what better place to learn about policymaking than in the heart of the national government?”

Likewise, Peter Troedsson, MPA ’98, who retired as a captain after a 30-year Coast Guard career, continues to rely on the public policy knowledge and skills he gleaned at GW in his current position as city manager for Albany, Oregon. “If you want to exercise the best in stewardship and the best in service, you need to understand the basics behind how policy is created and how government resources should be administered,” Troedsson said.

A Commitment to Service

Growing up in Mississippi, Merchant never expected to forge a career in the Coast Guard. Her father left school in the eighth grade and her mother became the first person in her family to graduate from high school at the age of 20. But her parents stressed the value of education and service, encouraging Merchant to volunteer in her community from candy striping to girl scouts.

As a biology major at Tougaloo College, Merchant dreamed of being a doctor. But she was leery of the cost of medical school. A campus Coast Guard recruiter told her the service would pay her tuition and provide a salary. “I didn’t know anything about the Coast Guard. I didn’t even know it was part of the military,” Merchant laughed. “After I signed up, I thought, ‘What am I getting myself into?’”

Merchant sees the Coast Guard as an extension of her lifelong commitment to service—whether she’s executing search and rescue cases, providing relief to hurricane victims or, as in her previous position commanding Chicago’s Marine Safety Unit, sitting on the board of a gang intervention nonprofit. “The one continuous theme for me, even from a young age, is service,” she said. “In the Coast Guard, I quickly learned that what I do is less about me and more about the people around me and the impact I can have on them.” As an African American woman, Merchant said she’s faced challenges in the military. But more often, her colleagues have supported her—and even looked up to her as a role model.

“People have told me they’ve never seen a woman or a minority in my position or at my rank, and that it makes a big difference to see someone who looks like them succeed,” she said. “I hope I have inspired them to keep reaching for what they want in their careers and in life.”