Once thought to be all but eradicated, tuberculosis has made a tragic come back. Luther Rice Fellow Abby Pepin is working with Chemistry's Cynthia Dowd to turn back the TB tide.
March 8, 2017 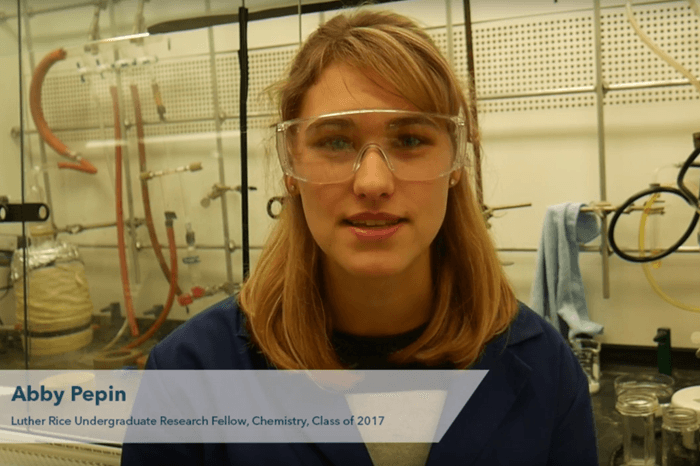 In the 1940s and ’50s, the scientific community appeared to be winning its war against tuberculosis. In the wake of 19th century epidemics, newly created vaccines and effective drug treatments had the deadly chronic bacterial infection on the run. As infection rates dropped, the United Nations even predicted that TB would be eliminated worldwide by 2025.

But that prognosis proved tragically optimistic. As the disease became ever-more drug resistant, TB once again emerged as a global health crisis. Today, tuberculosis is one of the top 10 causes of death worldwide, infecting 10.4 million people in 2015 and killing 1.8 million, including 170,000 children.

What went wrong—and can science still turn back the TB tide? Those are among the questions senior chemistry major Abby Pepin is exploring inside Associate Professor of Chemistry Cynthia Dowd’s lab in the Science and Engineering Hall.

With a $2.6 million grant from the National Institutes of Health, Dowd’s research focuses on developing novel compounds to fight the world’s deadliest infectious diseases, including tuberculosis and malaria. Dowd and her team of student researchers —Pepin, four graduate students and a post-doctoral researcher—are investigating new avenues for blocking the chemical reactions that are crucial for tuberculosis and malaria’s survival.

“Our goal is not only to find a way to treat resistant strains [of TB and malaria] but to more effectively treat the sensitive strains so that resistance doesn’t happen as frequently,” Dowd said.

Pepin’s role involves sidestepping the resistance TB has built up to previous drugs by synthesizing a new compound that disrupts the disease cells. Already, her work has been recognized with a Luther Rice Undergraduate Research Fellowship, which provides funding support to Columbian College undergraduates engaged in faculty-mentored research projects. In addition, she was awarded a Ruggles Fellowship as the most academically distinguished female Luther Rice recipient. And she will present her findings at the spring Research Days competition.

“The importance of what we are doing in this lab just cannot be understated,” Pepin said. “Drug resistance is so rampant that we need to design new ways to treat these diseases. I’m so fortunate to be a part of Professor Dowd’s team. Her guidance and knowledge really sets our research apart.”

Far from being eradicated, tuberculosis remains the No. 2 single-agent infectious killer in the world, behind HIV/AIDS, according to the World Health Organization (WHO). About 4,100 people worldwide die of tuberculosis each day—compared to, for example, the 11,000 people who died in the most recent Ebola outbreak over two years. If left untreated, two-thirds of people with active TB die.

While TB-fighting antibiotics have existed for decades—and they cure 90 percent of the patients who receive them—the current treatment regimen for the disease is not adequate, according to Dowd. Patients must take multiple drugs daily for nearly a year, often under the direct supervision of a health care provider. “That means one thing in the United States, but it means a totally different thing in the middle of Cambodia or Indonesia where you can't get access to a health care provider every single day,” Dowd said. No new drug has been approved for TB since the 1970s, forcing patients to rely on a heavy dose of antiquated medications that cause side effects from flu-like symptoms to painful hives and rashes. “Suffice it to say, the drugs we currently use for TB are old and are wanting in a lot of areas,” Dowd said.

Pepin is participating in research that targets an enzyme known as DXR, which drives chemical reactions within both malaria and tuberculosis cells. DXR is critical for the survival of TB cells. Pepin is part of a team searching for a compound that inhibits DXR, essentially blocking the enzyme’s function inside the TB cell. Since the enzyme doesn’t appear in people, “shutting down” DXR would theoretically cause no harm to human physiology.

Similar DXR-inhibiting experiments have shown some success in battling malaria. But TB presents more daunting challenges. TB cells sport a thick outer-coating that is difficult for drugs to penetrate. Also TB cells have proteins known as efflux pumps, which expel the drugs before they can do their job. “TB is a very evolved pathogen; it’s much, much harder to kill than malaria,” Dowd said. “Normal drugs like penicillin just don’t work against TB.”

Pepin’s contribution—synthesizing a particular molecule that will play an integral role in the team’s DXR-inhibiting research—has led to long nights in the lab and more than a few false starts. “It’s incredibly frustrating when you start down a path with a compound that looks promising and suddenly it degrades on you and you have to go back to the starting line,” she said. “I’m learning that, in the lab, things don’t always work out on the first or the second or the third try.”

Pepin, who will attend GW’s School of Medicine and Health Sciences after graduation, joined Dowd’s team in 2015 after working as a research assistant for Assistant Professor of Biology Mollie Manier. She balances her work in Dowd’s lab with a volunteer research project on prostate cancer at the George Washington Hospital Radiation Oncology Department.

“Science is like a sanctuary for me,” she said. “It’s a way to get my head out of the noise and chaos that can be swirling around sometimes and focus on a detailed, complex task. That may not sound like fun to a lot of people, but it’s rewarding to me.”