A Century of Suffrage 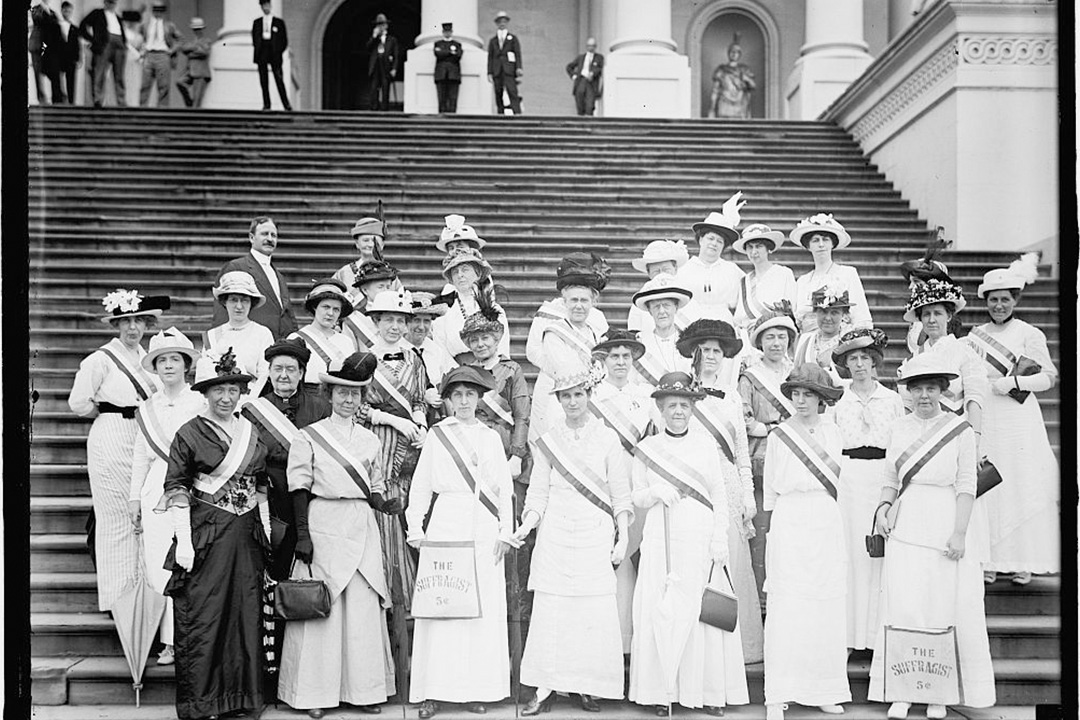 Suffragettes at the U.S. Capitol, 1914 (Photo Courtesy Library of Congress)

To mark the 100th anniversary of the 19th Amendment, which barred sex-based discrimination in voting rights, CCAS Spotlight spoke to Associate Professor of Political Science Corrine McConnaughy, an expert on gender and race in American politics and the author of The Woman Suffrage Movement in America: A Reassessment. McConnaughy discussed the history of the suffrage movement, the myths behind the 19th Amendment and how the lessons of the voting rights landmark still resonate a century later.

Q: Take us back to 1920 and set the historical stage for the 19th Amendment. What did the political landscape look like for women’s suffrage?

A: A lot of people don’t realize that well before the 19th Amendment, there were plenty of American women who already had the right to vote. The 19th Amendment did not grant women the right to vote. It prohibited the states from using sex as a disqualifier in who had the right to vote. In 1890, Wyoming was the first state to come into the union with the right to vote for women. In 1893, Colorado adopted woman suffrage into its existing state constitution. Then woman suffrage marched west to east to large, established states like Illinois. And an even larger number of states gave women limited voting rights. They couldn't necessarily vote for the highest offices, but they voted on school- and tax-issues and municipal elections, which, in that era, was not a small thing.

Q: So women had a voice in American politics even before they had a vote?

A: Women were doing politics since before the founding of the country. Women figured out how to influence politics while they were still mostly excluded from electoral politics; they had a voice in how their communities made decisions, how resources were used, how public goods were provided and on and on. In the 1800s, you would find women affecting politics through literary societies and sewing societies. For example, a women's sewing society might raise the funds to buy the land for a town cemetery. Women couldn’t enter the political world as voters, but, at that time, we saw women engaged in organized, collective, interest group politics.

Q: You wrote an op-ed for the Washington Post on the fight for voting rights titled “Forget Susan B. Anthony.” What did you mean?

A: Obviously I’m not saying Susan B. Anthony wasn’t crucially important for the suffrage cause. But a singular focus on any political figure associated with the movement leaves out big pieces of the puzzle. Women on the ground in the states were plugged into political spheres. They were making alignments with other movements, who discovered how to make politicians responsive. We get to the 19th Amendment through their practices of coalition politics between the suffrage movement and important constituencies of existing male voters, like farmers’ organizations and labor unions. This is not to discount the amazing work that suffragists did. These women were political forces to be reckoned with. But part of their skill was coalition building with groups that already had political power and could be brought over to the side of woman suffrage.

Q: What changes in 1920 when the 19th Amendment is ratified?

A: Well, first let’s talk about what doesn’t change. The federal amendment says that the right to vote can't be abridged or denied on the basis of sex. But there are plenty of women who were still left out because states used racial qualifications and literacy qualifications and even poll taxes to prevent women from voting. Native American women were left out. Most black women were left out. So for many women, nothing changed. But for other women, the amendment gave them a formal voice and allowed them to be fully-integrated into politics. In some sense, they had a new identity as fully-included citizens.

Q: And do women then have an immediate electoral impact?

A: It’s a mistake—then as now—to look at women as a single monolithic voting bloc. With the 19th Amendment, women come into the electorate but without loyalty as a group to a particular party. Teddy Roosevelt’s Progressive Party ticket was the first nationally viable one to put woman suffrage on their agenda. But by 1916, all of the national parties had adapted in one way or another to the inclusion of women. In some reform movements—the temperance movement or abolition, for example—women organized explicitly as women, but that doesn’t mean women, generally, were committed to those issues. Women don't do politics united by their womanhood. Flip that idea on its head: Do we think that men make voting decisions based on unified manhood? For some voters—men or women—gender identity may be a salient voting issue, but not for everyone.

Q: When we celebrate the anniversary of the 19th Amendment, what should we actually be celebrating?

A: The real lesson of the 19th Amendment, what we are really celebrating, is the story of regular citizens’ engagement in the political system. This was a story of real grassroots politics. It was the story of a big change in what American democracy looked like because of massive involvement of ordinary people in making it so.