Whether you’re keeping up with politics or escaping with a page-turner, BuzzFeed Founding Book Editor Isaac Fitzgerald, BA ’05, has a recommendation to satisfy your bookworm.
January 17, 2019 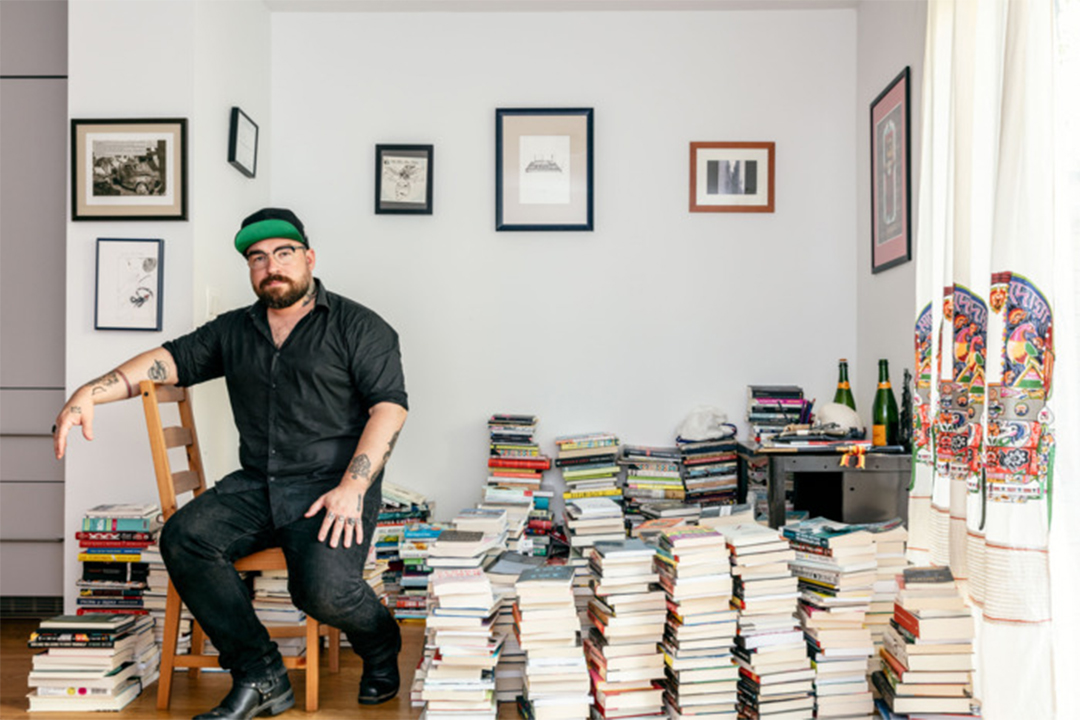 BuzzFeed writer Isaac Fitzgerald, BA ’05, has always surrounded himself with books. He grew up in a working class Boston neighborhood within walking distance of the public library. “My parents didn’t have much,” he recalled, “but they always made sure I had a book in my hand.” As a political science major and philosophy minor, he worked at Gelman Library and spent his lunch breaks strolling through the stacks.

In his position as BuzzFeed’s founding book editor, Fitzgerald reads hundreds of books a year, many of which find themselves piled high in his Brooklyn, N.Y., apartment. “My New Year’s resolution is to buy some bookcases,” he laughed. Fitzgerald is also a frequent book reviewer on The Today Show and the author of two nonfiction books—Pen & Ink: Tattoos and the Stories Behind Them and Knives & Ink: Chefs and the Stories Behind Their Tattoos (with Recipes).

As we turn the page on 2018, CCAS Spotlight asked Fitzgerald to share some recommendations for bookworms, political junkies and anyone wanting to kick off the new year with a great read.

Oprah Winfrey’s most recent book club selection was Fitzgerald’s favorite book of 2018. Its themes of “love, race and the mass incarceration of black men in the United States” are all-too-relevant in the new year, he said. The story of a young African American couple whose relationship is tested when one is unjustly convicted of a crime, An American Marriage “explores enormous issues while depicting its unforgettable characters in all of their richness, complication and humanity,” Fitzgerald said. “It’s a hard book about what we owe one another and the ways in which the prison system in America tears people apart.”

“The landscape of reading culture is the most diverse it has ever been!” Fitzgerald cheered. One of his favorite new authors is Tommy Orange, a member of the Cheyenne and Arapaho tribes who, Fitzgerald said,  “introduces a refreshing Native American voice” to the literary world. In his debut novel There There, Orange follows shifting narrators as they travel to a powwow in Oakland. “It deals with the very modern problems Native Americans face while also respecting their history and tradition,” Fitzgerald said. Discovering diverse new authors is “the most exciting book trend in decades,” he said, “and [There There] is a great work of literature by any standard. Full stop!”

Some readers long to escape the frenzied political landscape. Others are eager to dive right in. For politics junkies, Fitzgerald considered recommending Michelle Obama’s Becoming, but instead chose veteran Washington Post reporter Bob Woodward’s White House potboiler. “If someone 10 years from now wants to know what was going on in our time, this is the book I’d hand them,” he said. The insider anecdotes of chaos within the Trump Administration carry frightening credibility coming from such an esteemed journalist, Fitzgerald said. “A lot of readers are confused by these times, but also morbidly fascinated—like a train wreck you can’t look away from,” he said. “For truly rubber necking-worthy stories, you’ve got to go to Bob Woodward.”

“If you know a student or a recent college graduate who is thinking of pursuing the writer’s life, this is the book I would put in their hands,” Fitzgerald said. These essays reflecting on the author’s experience as a gay man, a Korean American and an artist are “like a roadmap for crafting creative nonfiction,” Fitzgerald said. Blending stories from his own life with national events, Chee covers topics from the AIDS crisis and 9/11 to his own oddball jobs as a Tarot card-reader and a caterer for William F. Buckley. “It’s history: the history of the country and the history of an incredible life,” Fitzgerald said. “It shows how a writer forms his identities in life and in art.”

“So many important things are happening in young adult fiction,” said Fitzgerald. Among his favorites is the boxset Track, a collection of four novels by Jason Reynolds. The books follow a group of middle schoolers from different backgrounds who compete on an elite track team. “When I was younger, it was so hard to find books about people like me,” Fitzgerald said. “Today many children can see themselves reflected in the books they’re reading. I wish [Track] was written when I was a kid!”

Fitzgerald gave high marks to alumna Elizabeth Acevedo, BA ’10, for The Poet X, a semi-autobiographical novel-in-verse about a young Afro-Latina slam poet. “That book blew my socks off,” he said. “Her writing is lyrical and strong and flows on the page.” The young adult novel won the 2018 National Book Award. Fitzgerald, who introduced Acevedo at the pre-award reception, didn’t know at the time that his fellow author was also a fellow alumni. “The next time I see her, I’ll be sure to shout out ‘Go buff and blue!’”