Graduate student Sarah Chastain searches space for cosmic transients—a project that is also opening the field to a diverse new generation of students and scholars.
November 9, 2022 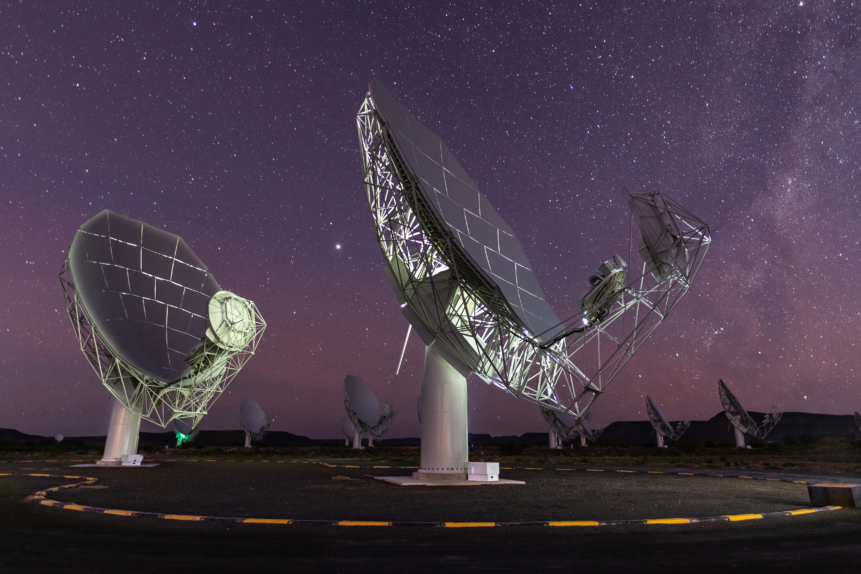 It’s there one moment and gone the next—a pinpoint of light flickering in the night sky. To stargazers, it might seem like nothing more than a passing airplane or a shooting star. But to Sarah Chastain, a physics graduate student at the Columbian College of Arts and Sciences (CCAS) and a research assistant in Associate Professor of Physics Alexander van der Horst’s astrophysics lab, that bright dot isn’t just a curiosity. It may be one of the most extraordinary events in the universe.

Chastain scans the sky for cosmic transients. These unexplained astronomical phenomena appear for brief periods, ranging from fractions of a second to weeks or years—the blink of an eye in celestial circles. They can unpredictably flash anywhere in the sky and just as quickly disappear without a trace. And while they may be caused by nothing more than interference from satellites and cell phones, they might also represent the afterglow of a gamma ray burst or the collision of stars.

“Transients are these bright little points that go ‘blip’—and then they’re gone,” Chastain explained. “But that blip could be the most powerful explosion in the cosmos.”

Transient hunts like Chastain’s involve some of the world’s most sophisticated telescopes. Chastain culls through tens of thousands of images—hundreds of gigabytes of data. Still, Chastain’s most lasting accomplishments, colleagues say, may be felt on the ground, not in space. Chastain helped pioneer a cutting-edge computational tool at a scientific facility in South Africa and has helped train a diverse new generation of scholars and students on understanding troves of research data.

That body of work led Chastain to be recognized as the ThunderKAT of the Year, a prestigious honor bestowed by an international collaboration of more than 100 astrophysics.

“Sarah is a great collaborator, not only for me, but for many others across the globe,” van der Horst said, noting that Chastain is “making and enabling great progress in radio transients research.”

Chastain’s lifelong fascination with the universe’s biggest events led to a position in van der Horst’s lab. Deputy chair of the CCAS Physics Department, van der Horst is among a team of researchers that recently observed a gamma-ray burst with an afterglow that featured the highest energy photons—a trillion times more energetic than visible light—ever detected in a burst.

They used the MeerKAT radio telescope in South Africa—the same technology that powers Chastain’s transient searches. With its 64 antennas, MeerKAT is the most sensitive radio telescope in the southern hemisphere. It is also the precursor to a planned new telescope in Australia and South Africa which, with 200 antennas, will survey the sky 10,000-times faster than any previous technology. The MeerKAT records so many images of possible transients that it’s impossible for the naked eye to tell whether they represent significant astronomical events or “just noise,” as Chastain puts it.

To sort through the massive data-load, Chastain helped advance a tool called the Transients Pipeline (TraP), which runs on an ultra-high-performance computing facility in South Africa. With TraP, researchers use statistical modeling to determine whether any of the thousands of individual bright dots can answer questions about how the universe works.

“It’s fascinating to me that we’ve built these instruments capable of finding out about massive explosions from just specks in the sky,” Chastain said. “I never get tired of digging through all that data.”

Meanwhile, Chastain has also led efforts to expand access to the complex systems by training and mentoring students and postdoctoral researchers from South Africa and surrounding African countries. Reikantseone Diretse, a master’s student at the University of Cape Town, said Chastain helped guide him through TraP for his thesis work. Chastain is “an esteemed colleague whose efficiency with everything has made this project all the more inspiring to work on,” he said.

To Chastain, the project’s many rewards range from contributing to the scientific record to opening doors for “new communities of researchers in different parts of the globe.” But the most satisfying part, Chastain said, is the elation of seeing a complex web of information add up to an actual discovery. “There’s a moment when, after months of collecting a deluge of data, you looking at what you’ve got and you see it’s not noise—it’s something real. That’s when you know you have reached an exciting turning point.”