Political science and dance major Eva Gustafson combined her fields of study into a Luther Rice Fellowship dance production that celebrates the journey of American women through the eyes of Eleanor Roosevelt and Hillary Clinton.
April 12, 2018 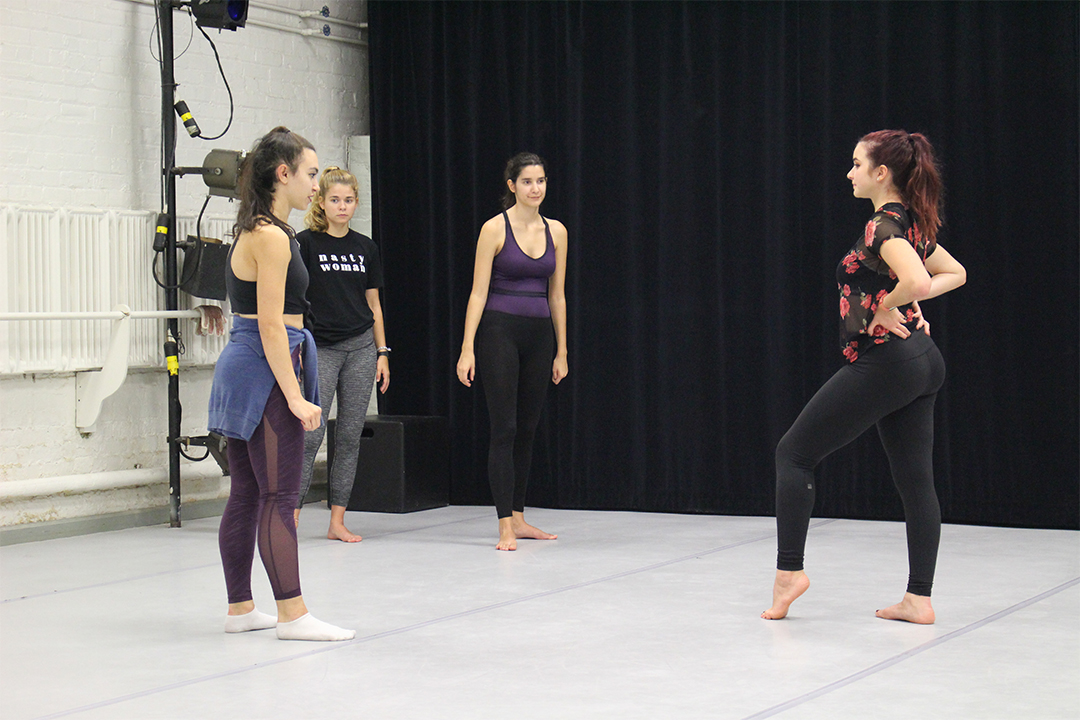 When political science and dance major Eva Gustafson first contemplated applying for a Columbian College Luther Rice Undergraduate Research Fellowship, she was conflicted about which of her fields of study would be the focus of her faculty-mentored project. Would it be a political science study or a choreographed dance production? The answer: She chose both.

Gustafson’s production, I’m With […] Them, celebrates in dance the political and social journey of American women through the eyes of Eleanor Roosevelt and Hillary Clinton. The production, which will be performed at the GW’s Spring Dance Concert later this month, is the result of seven months of intensive research that took her from the White House and the Smithsonian to Roosevelt’s Valkill cottage retreat in Hyde Park, New York.

“I don’t see myself as a very political person and the piece itself isn’t supposed to be purely political,” Gustafson noted. “I’d like people to see it as a narrative that reflects the universal and challenging mazes women navigate—in society and in politics.”

Gustafson’s full research project—titled “From First Ladies to Politicians: An Examination of Women in Politics”—serves as the basis for her Luther Rice Fellowship, senior dance thesis and a presentation at Research Days, the annual two-day celebration of student research at GW. The project charts the advancements of American women from the suffragette movement through the 2016 presidential election. For her dance production, she pulls from her research to combine expressive movements from student dancers with audio clips of Roosevelt and Clinton.

I’m With […] Them was initially inspired by a seminar on women and politics taught by Associate Professor of Political Science Corrine McConnaughy. The class sparked her interest in political victories by American women—from the 19th Amendment guaranteeing their right to vote to Clinton becoming the first female presidential candidate for a major party—but she was uncertain how to translate those milestones into a dance narrative.

“I wanted to do a hybrid [dance] project that married political science and dance, but I didn’t have a concrete plan for how to do it,” she recalled. Her faculty mentor, Professor of Dance Dana Tana Tai Soon Burgess, suggested narrowing her focus to Roosevelt and Clinton, arguably the most influential women in American political history, and their impact on generations of women. Burgess, a critically acclaimed choreographer, also stressed the importance of approaching the production as a research project.

“A choreographer follows the same process that an innovative scientist or mathematician uses to solve a unique question,” Burgess explained. “One has to research, experiment in the dance studio—our laboratory—and create a meaningful perspective and clear choreographic answer to the question at hand.”

Before choreographing a step, Gustafson combed through texts, media records and videos of nearly every speech delivered by Clinton and Roosevelt, including the digitized archive resources from Columbian College’s Eleanor Roosevelt Papers Project. In addition to visiting Roosevelt’s home in Hyde Park, she garnered a behind-the-scenes tour of the Smithsonian’s “First Ladies” exhibit and visited the White House to walk the same hallways as the famous first ladies. “These are the most incredible women in American history and it was humbling to see the places where they had their most human moments,” Gustafson said.

Gustafson wanted to draw parallels between the two women’s historic accomplishments and the barriers they faced because of their gender. She featured material to express how both were attacked for their outspokenness and left-leaning politics even as they strived to redefine the role of the first lady. In I’m With […] Them, Clinton is heard exclaiming, “I want to push the envelope as far as I can in behalf of women and girls”—essentially the theme of Gustafson’s production. “Each generation’s victories pave the way for the next,” Gustafson said. “Universally, as women, we all understand that. We all feel that commitment on some level.”

Each of the eight student dancers in her cast were provided with detailed research packets and videos of both Roosevelt and Clinton, but Gustafson stressed the importance of capturing the first ladies’ personalities in dance rather than imitating them. For example, she encouraged junior international affairs and dance major Emily Ariz to bring a calming presence to her portrayal of Roosevelt, while directing Annie Mancuso, a junior majoring in dance and psychology, to play Clinton as a “firecracker.” Gustafson cast Berkley Lane, a sophomore majoring in environmental studies and dance, as a character that breaks an invisible glass ceiling on stage.

“I think the audience will feel inspired by this piece,” Lane said. “I think they will leave the production understanding how impactful women in leadership roles are in America.”