Female candidates have similar electoral success rate as men. So why do we view the political arena as rife with sexism? Danny Hayes reveals that the perception of bias—not the bias itself—may be what’s behind the notion of gender discrimination.
November 11, 2015 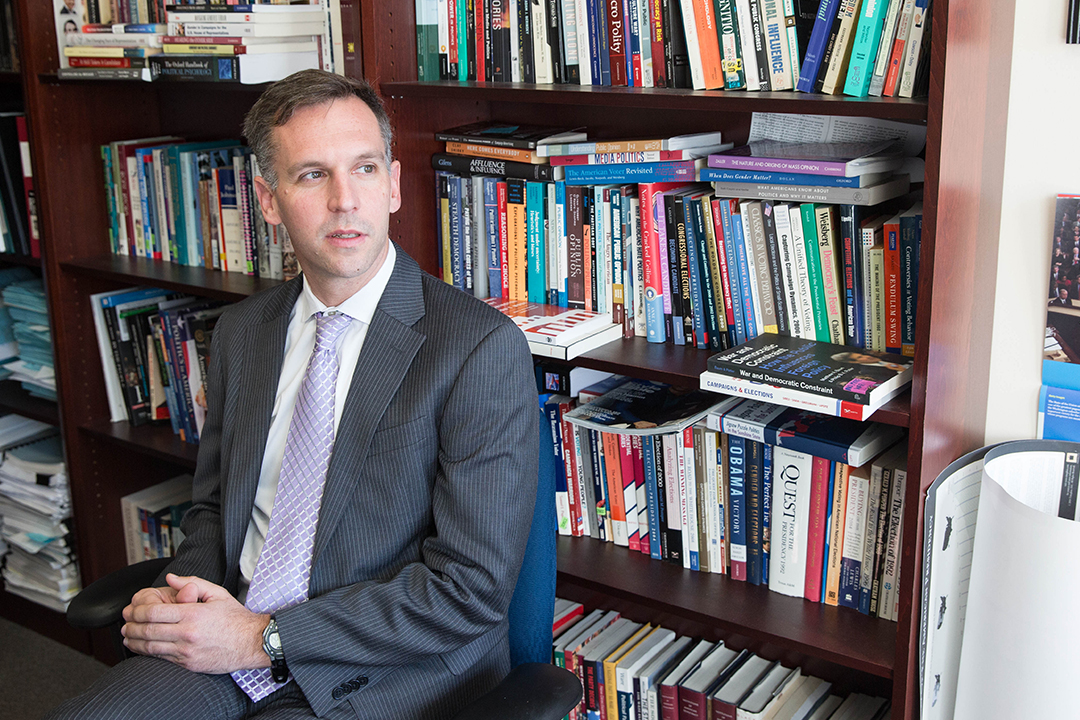 Hillary Clinton’s hairstyle. Sarah Palin’s wardrobe. When female candidates run for office, the electoral focus invariably seems to fall on their appearance rather than their ideas and qualifications. It’s a long-standing assumption that women battle fierce gender bias on the campaign trail—from the media, their opponents and even the voters themselves.

But what if that assumption is incorrect? What if the real hindrance to a woman’s road to the White House isn’t as much gender bias, but the perception of bias—and the impact that misbelief has on the process by which candidates emerge for office?

That’s the idea proposed by Danny Hayes, associate professor of political science, in his upcoming book Women on the Run: Gender, Media, and Political Campaigns in a Polarized Era (Cambridge University Press), coauthored with America University Professor of Government Jennifer Lawless. Hayes, a former journalist and a regular contributor to The Washington Post's Monkey Cage blog, doesn’t deny that sexism exists in the political arena. But he argues that the days when what a woman candidate wore mattered more than what she said are actually behind us.

“Candidates’ gender plays a minimal role in the vast majority of U.S. elections,” Hayes said. “Today, male and female candidates have few reasons to campaign differently, the media have little incentive to cover them differently and voters have minimal reason to evaluate them differently.”

Instead, he maintains, it’s the lingering notion that women candidates are besieged by bias—and the consequences of that belief within the political process—that truly impedes their electoral ambitions. In a campaign season that may yield a female president, Hayes explained that candidates like Clinton and Fiorina face the same challenges on the road to the White House as male politicians.

There’s a widely held view that when women run for office they face bias from the media and discrimination from voters. They are subject to gender stereotypes. Women are perceived as warm and compassionate, but not strong, competent leaders. In politics, that naturally puts women at a disadvantage. It might force them to campaign differently than men; it might lead the media to treat them in superficial ways, like covering their appearance in ways they don’t cover men. They may be characterized as less serious or viable electoral choices. The public believes that those media biases exist and that women are less likely to win elections.

Q: But your research reveals that’s not the case?

Yes, for the most part, these perceptions are wrong. We systematically looked at media coverage of 800 U.S. House races involving more than 1,500 candidates across two different election cycles from 2010-2014. It turns out that female candidates run virtually identical campaigns as men—from the issues they talk about to the language they use to the personal traits they stress. They are just as likely to be covered fairly by the media as men. Voters are just as likely to regard women as strong leaders. The bottom line is: When women run for electoral office, they are just as likely to win as men.

"Women candidates believe that the political arena is rife with sexism and discrimination. They think that they need to be twice as good to get half as far as men."

Q: If gender bias isn’t to blame for the underrepresentation of women in politics, what is?

It's primarily because women are much less likely to run than men. Part of this has to do with the fact that the conventional wisdom feeds a lingering barrier that discourages them from running for office. Most women are not likely to face the pernicious media bias that candidates in the past may have faced. But many potential women candidates believe that the political arena is rife with sexism and discrimination. They think that they need to be twice as good to get half as far as men. These public perceptions trickle down to the process by which candidates emerge for office. One of the best predictors of whether someone runs for office is whether they are encouraged by party leaders and activists. If there is a belief among party leaders that women will face a tougher time from the media and from voters, they will be less likely to recruit women to run in the first place. If they run, they win. But first they have to run.

Q: But sexism does exist in politics, doesn’t it?

Let me be clear: We are not saying that sexism is a thing of the past. It certainly happens. And women are significantly underrepresented. They make up just 19 percent of Congress and fewer than 25 percent of state legislators. We've never had a female president. Our misperceptions about the bias against female candidates are fueled by a political discourse that overemphasizes the sexist experience that women indeed sometimes face. The media is enthusiastic in its coverage of sexism in politic. When we think back, it’s easy to recall stories about Sarah Palin’s $150,000 wardrobe. But think of Palin’s overall coverage. How much of it was really about her clothes? Or is that just what we remember?

Q: What has changed the landscape for female candidates?

Two features in contemporary American politics essentially leveled the electoral playing field: One is the declining novelty of female politicians. In the 1970s and 1980s female candidates were newsworthy simply because they were women. It led to more coverage of them as women as opposed to them as politicians. But women candidates have become commonplace. There are very few congressional districts where women haven’t been on the ballot. The other factor is the polarization of political parties. Partisanship is a far more salient issue than whether a candidate is a man or woman. Voters mostly care about whether there is an “R” or a “D” next to his or her name.

Q: Let’s look at the current presidential campaign. We have two women running for president; one is a frontrunner. This isn’t commonplace.

This is a novelty, but I think the importance of gender is still oversold on the national level. The House elections we studied look a lot more like the vast majority of American elections than presidential or other high-profile contests that get so much attention. Still, whether a candidate is a man or woman matters less than the typical perspective about women in politics implies. It’s certainly fair to say that Hillary Clinton’s clothes have gotten more attention than some of the male candidates. But, nonetheless, it’s easy to find examples of males covered for their appearance. In 2012, Paul Ryan was teased for wearing baggy suits. The Washington Post recently wrote about Bernie Sanders’ white hair and disheveled look. Martin O’Malley has a famous photo with his shirt off; his attractiveness is frequently mentioned. How much of Hillary’s coverage is about her appearance? I would say very little. Her emails get a lot more coverage than her wardrobe.

Q: Are we at a time when candidates like Clinton and Fiorina can actually use their gender to their advantage?

Certainly. If the media covers Clinton in a significantly different way than men, it probably reflects the extent that she herself makes it an issue in the campaign. She references being a grandmother and understanding the concerns of women because she sees it as advantageous. The Clinton and Fiorina campaigns actually have an incentive to draw attention to the fact that they are women running for president. Nonetheless, let’s fast forward to November 2016 and imagine that Hillary Clinton is the Democratic  nominee. Let’s say she’s facing a man from the Republican field—Rubio or Bush or Trump or whomever. How much will her gender matter in the outcome of the election? Most political scientists would conclude a lot less than the fact that she’s a Democrat.