For Alumnus Author, A Journey into the American Identity 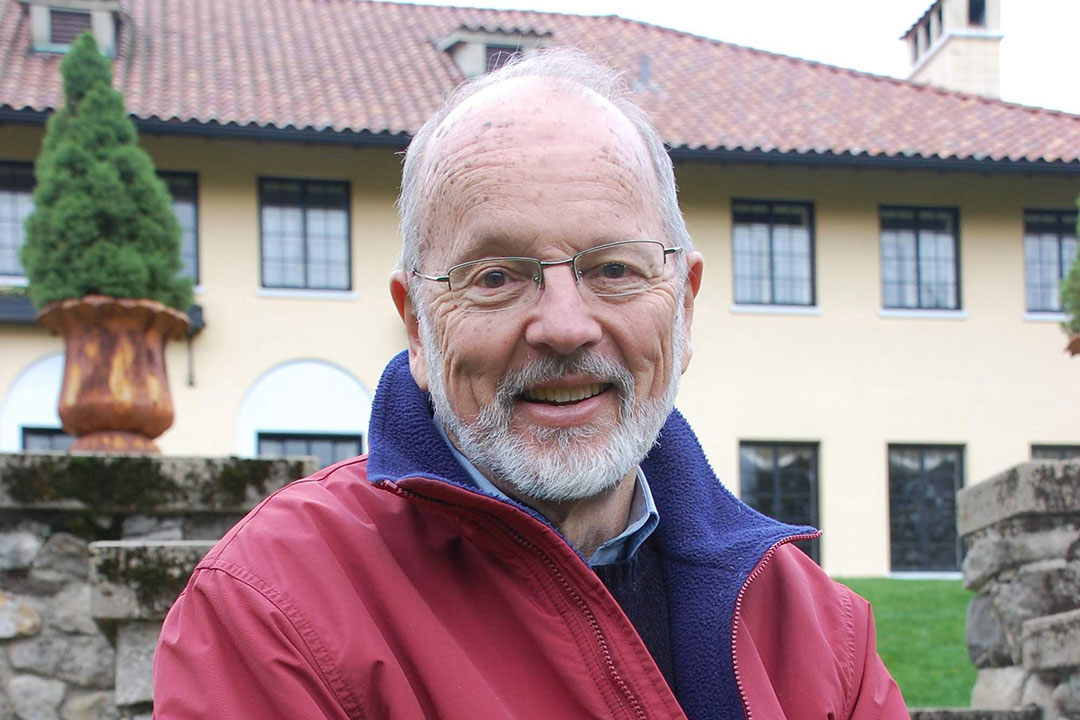 Former journalist, noted author and distinguished educator of journalism Loren Ghiglione, PhD ’76 released his latest book Genus Americanus: Hitting the Road in Search of America’s Identity, which documents his trip across the United States to interview 150 Americans about race and other identity issues. Ghiglione, who turns 80 in April, hopped in a minivan with two young journalists—coauthors Alyssa Karas and Dan Tham—and drove 14,000 miles over three months and through 28 states, following the path of Mark Twain. In the following interview, Ghiglione, who earned his doctoral degree in American civilization, talks about the experience and the lessons learned.

Q: What question did you set out to answer when you started this odyssey into American identity? Was it answered fully or did it evolve throughout the trip and project?

A: I began with several, somewhat general questions about identity—my own identity, my immigrant family’s and Americans’. The more we traveled and interviewed and reinterviewed, the more I focused on the question of whether those discriminated against on the basis of color, ethnicity, gender, sexual orientation, gender expression, religion, class or immigration status have contributed to the nation any less than those citizens often identified as “real Americans.” With greater focus (and an editor’s nudging), the book shrunk from 200,000 words to a more svelte 113,000 words.

Q: What message do you hope readers take away from Genus Americanus?

A: Much work remains on many fronts to make America into the just, egalitarian, multiracial, multicultural society that many Americans say they seek. Positive change is not inevitable. But the millennial generation and succeeding generations of Americans are better equipped than earlier generations, including mine, to bring about the needed change.

Q: In these highly polarized times, what have you found to be the most effective way to bridge the gap?

A: I’m not sure I have a good answer. I try to work at listening more, listening better and talking less. But I am at a professional disadvantage: I am a professor, and professors have been known to pontificate. While I try not to avoid telling what I see as the truth about people, I like to believe that the truth in my storytelling demonstrates people’s humanity and increases public understanding of them.

Q: What advice would you give to students or budding journalists/oral historians?

A: Practice humility; assume your writing can be a lot better if you work a lot harder at it, and that you, like all of us, need to be a lifelong learner, determined to diminish your ignorance about worlds and people that have been outside your comfort zone or beyond your experience. Also, travel widely, mentally as well as physically. Our trip made clear to me, for example, that I was almost completely ignorant about Native Americans, intersex individuals and most refugee communities. 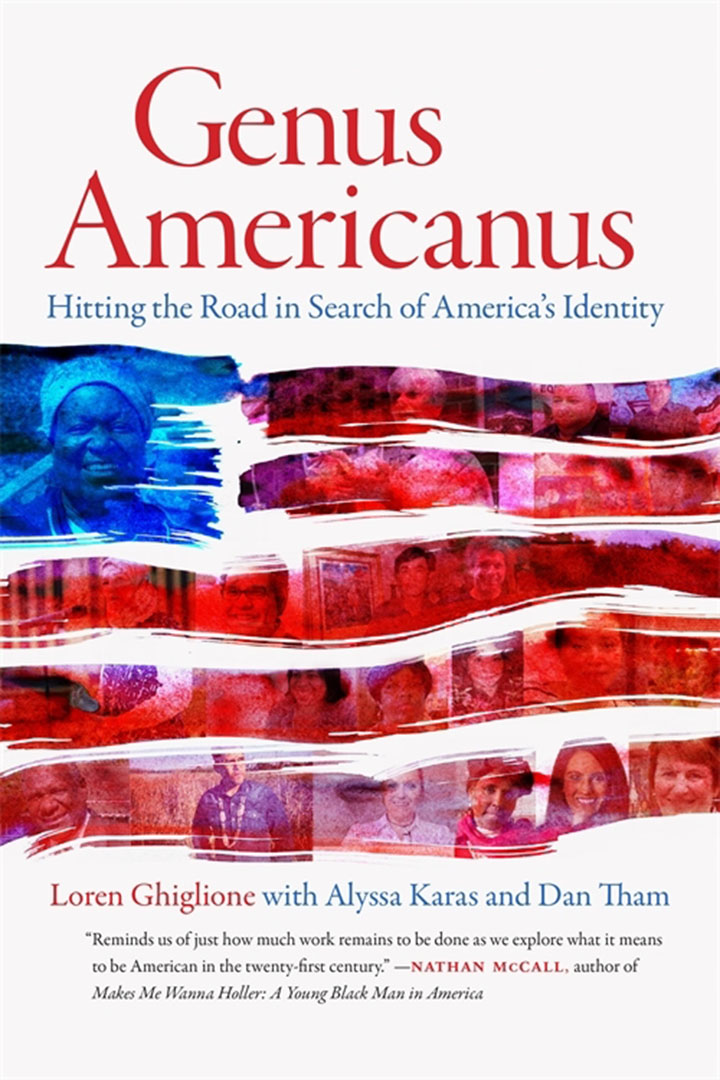 Q: Can you describe a particularly memorable or surprising moment on your trip?

A: Smash-and-grabbers broke into our van in San Francisco, escaping with our video camera, two laptop computers and two suitcases. The next morning, [we] received a tweet from someone [who] had found one of the suitcases, half open, in Oakland, 10 miles away. [After retrieving the suitcase,] the only missing item of note was Ron Power’s biography of Mark Twain. No doubt our erudite smash-and-grabbers wanted to read about Twain’s time in San Francisco, which he called “the most cordial and sociable city,” perhaps to learn how they could be even more hospitable to out-of-towners.

Q: If you could go back in time and replan the trip would you change the itinerary at all? Would you add stops, or spend longer in a particular city?

A: We were following Mark Twain’s route around America, after he left his boyhood hometown of Hannibal, Missouri. Bur our limited budget and our van’s unwillingness to undertake long-distance swimming prevented us from visiting the Hawaiian Islands, where Twain wrote 25 articles in 1866 as a correspondent for the Sacramento Union. Hawaii is of special interest to me because, of the 50 states, it has the largest multiracial population with 24.1 percent of its population of two or more races. That may foretell the future of the continental United States. If we had an additional month, I would have spent more time in New Orleans and the West, especially in communities of color, including Native American nations. 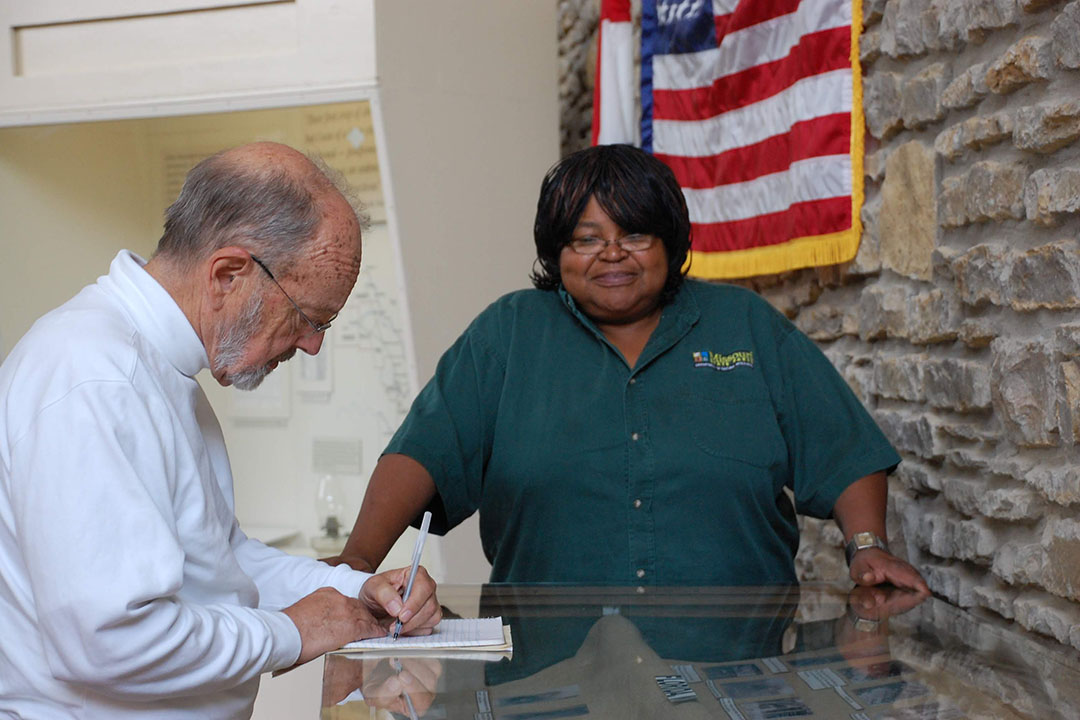 Ghiglione interviewing Connie Ritter, a guide at the Mark Twain Birthplace Museum in Stoutsville, Mo., the first of 150 interviews during the trip. (Photo: Alyssa Karas)