From her efforts in Ghana to reforming American schools, Sally A. Nuamah, BA ’11, is a fierce advocate for helping girls obtain equal education around the world.
November 14, 2019 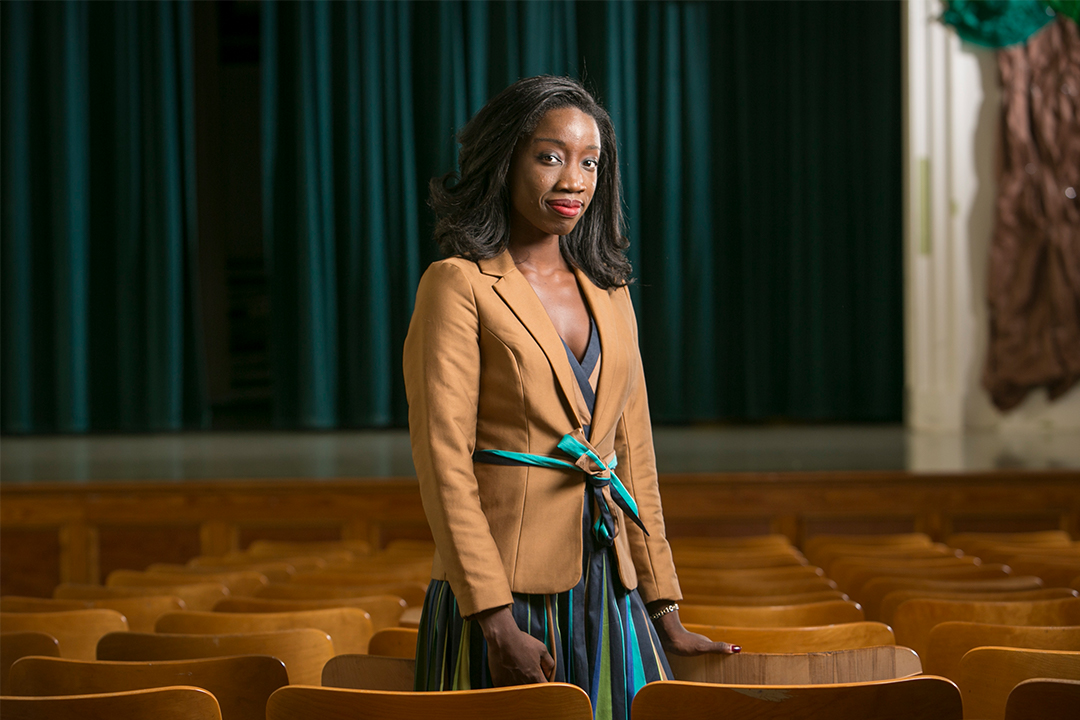 Sally A. Nuamah, BA ’11, is an author, youth education advocate and professor.

When Sally A. Nuamah, BA ’11, first traveled to Ghana to study abroad during her sophomore year at Columbian College, the political science major expected to find herself in a completely different world. The child of Ghanaian immigrants, Nuamah grew up in inner-city Chicago, where her single mother stood out for her accent and her West African cooking. Nuamah, however, identified more with her working class African American neighborhood than her mother’s native country.

But from the moment she arrived in Ghana, Nuamah was surprised not by the differences she encountered, but by the similarities. “I saw girls who looked like me,” she said. They were youthful and vibrant—and struggling with challenges like poverty and barriers to education. In Chicago, Nuamah watched friends drop out of school. Her own mother had been accepted to a university in Ghana, but couldn’t afford the tuition. Now, Nuamah was hearing the same lament from the girls around her.

“The constraints placed on disadvantaged youth—especially girls of color—look very similar, whether you're in urban Chicago or in Accra,” Nuamah said. “If my parents hadn’t migrated to the United States, then I wouldn’t have gone to GW and gotten this excellent education. I would have been just like these girls, just like my mother, trying to find a way to go to school everyday.”

Today, Nuamah is an accomplished author, youth education advocate and professor at the Northwestern University School of Education and Social Policy. She’s a Forbes Magazine “30 under 30” honoree, a 2019 Andrew Carnegie Fellow, a former member of the GW Board of Trustees and this year’s recipient of the university’s Recent Alumni Achievement Award. While still a student at GW, she began filming what would become her award-winning documentary HerStory, which follows three Ghanaian girls pursuing their education dreams. The film inspired her to launch the TWII Foundation, awarding college scholarships to low-income girls in Ghana. Her new book How Girls Achieve (Harvard University Press, 2019) looks at how schools from Africa to the United States are failing young girls, and offers blueprints for reforming them.

“Sally is quite unique in her ability to connect what we do in the classroom with the real world,” said Associate Professor of Political Science Steven Balla. “She made [her coursework] relevant to her interests globally in thinking about girls’ education and why they succeed. It’s been rewarding to follow her career as she has gone on to accomplish so many incredible things as a young professional.”

Nuamah’s mother encouraged her to become the first in the family to attend college, even as she faced some of the same obstacles as the Ghanaian girls she now assists. Although she earned a scholarship to GW, Nuamah initially felt out of place on campus. She credits faculty members like Balla, Professor of English Marshall Alcorn and the late Professor of English and American Studies James Miller with helping her realize that she deserved to be there.

“My professors encouraged me to push against the labels that institutions and society had placed on me,” Nuamah said. “They showed me that just because I fit the statistical categorizations of disadvantaged, it didn’t mean I couldn’t see myself as brave and smart.”

Driving Nuamah’s advocacy work is her keen understanding of how a strong educational foundation can have a positive impact on every facet of daily life—from raising healthier families and building stronger communities to creating economic opportunities. In Ghana, she observed how girls who attended school were less likely to contract AIDS, more likely to contribute to their country’s overall development and, if they become educated mothers, more likely to immunize their children and invest in their education.

But merely opening the school doors for young women is only part of the battle, she said. The harder fight is reforming the institutions themselves. “Schools weren’t built with girls in mind,” said Nuamah, noting that the challenges schoolgirls face resulting from sexual abuse or unequal access to materials and opportunities go largely unaddressed. In the United States, one in seven schoolgirls report being absent because they feel unsafe in school. And in Ghana, 26 percent of schoolgirls say they have experienced sexual violence.

Nuamah advocates for the creation of she calls “feminist schools,” deliberately designed to help girls thrive while providing safe, equitable spaces. “Achievement shouldn’t just be about academic success. It should be about the ability to attain academic success in a school where girls don’t have to bear a different set of costs than others,” she said.

From her first visits to Ghana, Nuamah was inspired by the young women she met, despite the hardships they faced. “From a statistical standpoint, it was unlikely that these girls would achieve the outcomes they had in mind—but they all had a strong sense that they could,” she said. Through her foundation, she has discovered that their confidence was not misguided. Most of the inaugural scholarship class went on to college. Some are currently pursuing graduate degrees in both Ghana and the U.S., four are in leadership positions at Ghanaian banks and one is the principal accountant for Ghana’s education services.

“It’s GW that made me feel like I would be able to help others,” Nuamah said. “It’s the spirit that I got from GW that drives me to continue to do this work; it’s what keeps pushing me.”