As a journalism and mass communications major, Zinhle Essamuah, BA ’15, MA ’17, documented protestors in Ferguson, Mo. Now, as a national news correspondent, she is again highlighting calls for change.
September 3, 2020 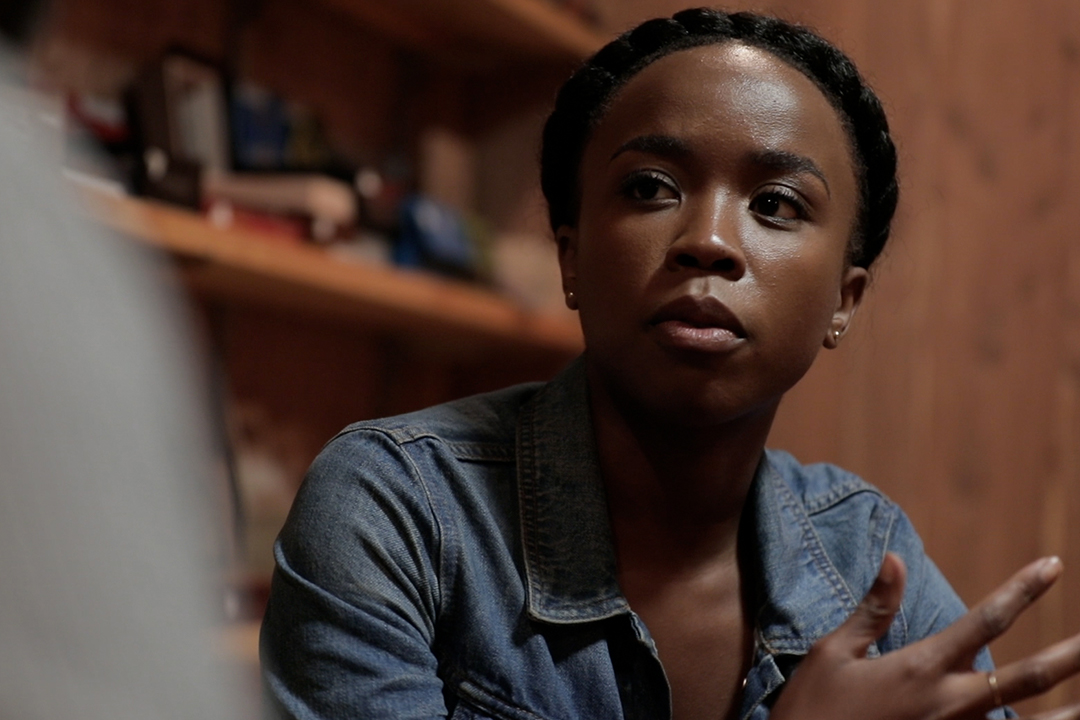 Zinhle Essamuah, BA ’15, MA ’17, has a different take on the axiom that journalists give voice to the voiceless. “Every person already has a voice that's strong and powerful,” said Essamuah, the host of KnowThis on NowThis news, a daily evening news show on Facebook Watch. “My job is to pass them a microphone or point a camera in their direction.”

An award-winning writer, reporter and filmmaker, Essamuah has been amplifying voices since her undergraduate years at Columbian College’s School of Media and Public Affairs (SMPA). In 2015, as a senior journalism and mass communications major, she won SMPA’s Manheim-Sterling Undergraduate Research Prize and traveled to Ferguson, Mo., in the wake of the police shooting of Michael Brown. She followed protestors through the city’s streets, her camera capturing the cries of clergy, community leaders and young activists demanding racial justice. Her resulting documentary Hands Up won awards at film festivals around the country and has become a resource guide for schools and community groups.

“To witness the love and experience the deep connections in Ferguson made me committed to that story,” she said. “It was about the people, their hope and continued struggle. It was a story I had to share.”

This summer, as racism and police violence against Black people once again dominate the news, Essamuah is still giving a platform to voices of change. NowThis is a digital media company and the most watched news outlet on social media, reaching 70 percent of Americans in their 20’s every month. As a national news correspondent, she’s at the forefront of newsroom coverage, interviewing many of the activists and political leaders who came to the limelight amid initial Black Lives Matter protests years prior. And she’s providing a unique perspective on how racial justice dynamics have evolved.

“During Ferguson, the question [from the general public] was ‘Do black lives matter?’” she said. “Now we are at an inflection point where communities, companies and individuals are all [more] aware that this disparity does actually exist. Now the question is: ‘How might I be compelled to act?’”

The daughter of African immigrants from Uganda and Ghana, Essamuah’s family witnessed first-hand the threats to a free press. Her grandmother and mother endured dictator Idi Amin’s oppressive regime in Uganda. “My grandma remains my inspiration both for her strength, but also for her commitment to truth,” she said. Essamuah grew up surrounded by news stories. She recalls reading Time magazine articles to her father when she was a teenager.

At GW, Essamuah threw herself into activities from theater to news. “For me, especially being a first-generation American, I am always aware of the value of my education and maximizing it to the greatest potential,” she said. She wrote a one act play that premiered at Arena Stage and contributed environmental protection videos to SMPA’s Planet Forward. She was a Presidential Administrative Fellow, an intern for CNN, an RA, a Knapp Fellow through the Honey W. Nashman Center for Civic Engagement and Public Service and worked at the Global Women’s Institute and Multicultural Student Services Center.

“Zinhle is this amazing mover and shaker. I was so impressed with how engaged she was in all of these different areas,” said SMPA Associate Director Imani M. Cheers. “She is just breathtaking.”

Essamuah credits a long list of faculty and staff mentors—including Cheers, Associate Professor of Media and Public Affairs Kimberly Gross and retired Theatre Professor Leslie Jacobson—with encouraging her to explore all of her interests rather than following a narrow road into journalism. “They affirmed my skill, talent and ability,” she said. Essamuah still regularly keeps in touch with Cheers, her advisor for Hands Up and her first teacher of color. “It was very impactful to have a teacher who looked like me—and who could give me perspective on what the professional world can be like for someone who looks like me,” Essamuah said.

As a reporter with NowThis news, Essamuah has continued to spotlight stories of injustice, from an investigative report on for-profit immigrant detention centers in the United States to covering Parkland, Fla., high school students on their quest for gun reforms. She has interviewed newsmakers like Bernie Sanders and Serena Williams. And she’s most recently highlighted the crisis in Black maternal mortality—three times higher than white women—by reporting on the family of a healthy 26-year-old Black woman in the Bronx who died in childbirth amid the pandemic. That report garnered over 3 million views in under a month.

“What makes Zinhle such a good storyteller is her empathy,” Cheers said. “She asks people to trust her with the most painful experiences of their lives. To do that, you have to be able to connect with them on a human level.”

As the news cycle returned to the Black Lives Matter movement, Essamuah reconnected with contacts from her Ferguson reporting. Hands Up included an interview with civil rights activist Brittany Packnett, an advisor to President Barack Obama on policing. In the past several weeks, Essamuah has interviewed, among others, BLM Co-Founder Patrisse Cullors and DeRay McKesson, an educator and activist who was among the earliest voices in the Black Lives Matter movement. Her broadcasts have framed how the current moment has built on the ongoing policy and protest work of long-time organizers and evolved into a societal phenomenon.

“When I started reporting on this subject, ‘Black Lives Matter’ was a bad word,” she recalled. Today, when she interviews activists, she hears hopeful voices—even if they know that there is still a long way to go. “They are encouraged by the changes that are happening. At the same time, there is a keen awareness that it's not enough.”

Essamuah, who has spoken and moderated at high-profile forums across the country including the first Intergenerational Town Hall on the Climate Crisis at the United Nations, believes that today’s journalists not only have an obligation to report the news but can also inspire people to action. Her goal is to try to affect as much change with a camera as a protest sign.

“I got into this business because I care about what's happening in our world,” she said. “At its best, the news can be an informational compass, guiding us through the uncertainties of life, fostering empathy and connecting us to stories and communities.”