Biology’s Scott Powell has traveled the world to capture nature’s most amazing ants in action. Can they teach us a better way to transport people and resources?
January 17, 2019 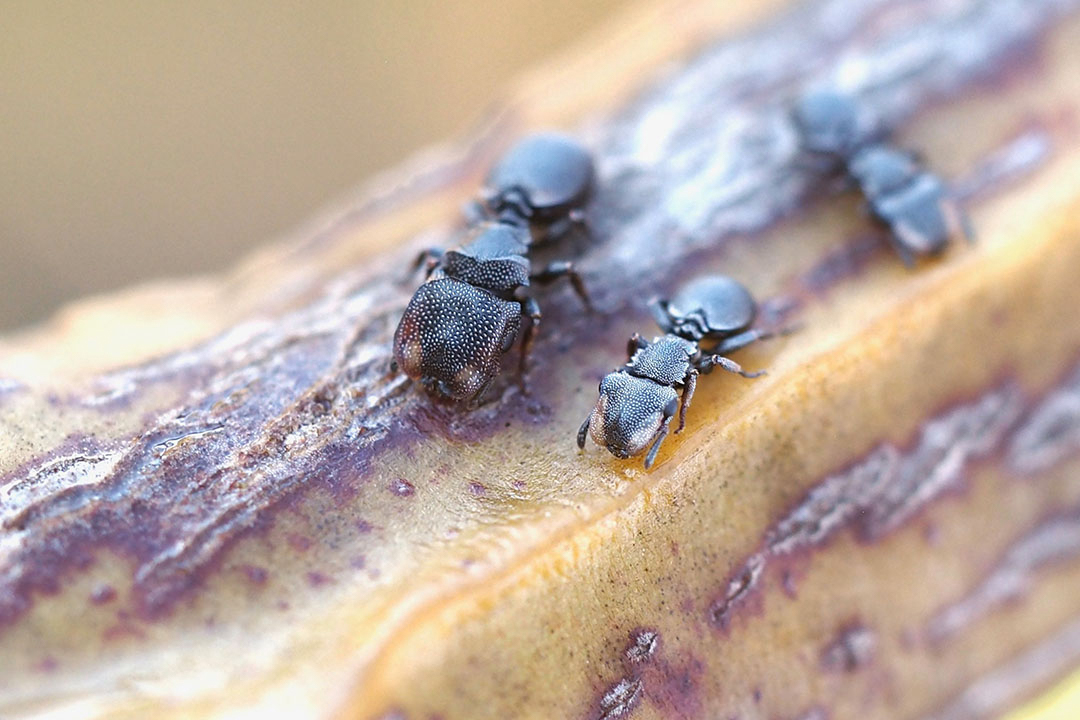 From his perch along a forest tree branch—whether in the woodland savannahs of eastern Brazil; the foothills outside of Tucson, Ariz.; or the blazing sunshine of the Florida Keys—Associate Professor of Biology Scott Powell spies on colonies of swarming ants.

To an untrained eye, the insect packs look like nothing more than hundreds of thousands of black dots scurrying through low-lying branches. But Powell, who has made ants the center of his groundbreaking studies on evolutionary ecology, sees something very different—not a jumble of scattering specks but a remarkably sophisticated network of activity.

Within a colony of turtle ants, Powell’s primary research focus, every member has a role to play. Looking down from the tree tops, Powell can point out individual one-eighth inch workers carrying eggs between nests. He can spot soldiers by their plate-shaped heads, nature’s armor evolved to protect the colony from invaders. He has seen ants with elaborate body armor that they use to bulldoze their way through enemies, and even workers that copy the posture and movements of other ants to steal their food.

In his latest project—a National Science Foundation (NSF)-funded partnership with Harvey Mudd College and the University of York in England—Powell is dissecting the way ants maintain high-functioning transportation networks for moving food, resources and even their own colony members between nests. By observing how they quickly adapt to disruptions in their routes—like broken branches and rain-flooded forests—his work can be the basis for solving problems in transport networks. It may have implications for delivery systems such as subway stations, Amazon routes and emergency response grids.

For most of us, ants are pesky picnic spoilers. But for Powell, they are an insect civilization whose custom and cultures—the way they communicate, interact and jointly problem-solve—have implications for fields from computer science to robotics.

“There are very few animals of any kind that have as sophisticated a social organization as ants,” said Powell, who has discovered at least a dozen new ant species. “There’s a lot humans can learn from ants.”

For Powell—whose students affectionately refer to him as “Ant Man”—ants are evolutionary marvels who’ve transitioned from isolated insects to functionally interdependent societies. With more than 16,000 known species, the highly-diverse ant world has adapted to survive in terrains around the globe. Each colony includes at least one queen along with scores of workers and soldiers who adopt a specific duty for life. Some ants are responsible for looking after the “brood” of larvae and pupae. Others forage for food or clean and repair the nest. Soldiers protect the colony. (In the case of turtle ants, an arboreal species that usually make their nests in the abandoned tunnels of wood-boring beetles, soldiers wedge their armored-heads into tree cavities to ward off predators.) Like some social insects including bees and wasps, female ants do all the work. Males die quickly after mating.

Powell has tracked ants throughout the Americas, from a two-year stint at a Smithsonian research station in the Panama Canal to the dry woodlands of central Brazil. That’s where he made what he considers his strangest discovery. While climbing a 15-foot tall cerrado tree to observe thousands of acrobat ants, a type of aggressive arboreal ant, he spotted a single speck that seemed to be moving erratically. “I did a double take. There was something about this one ant that didn’t look right,” he said. He had stumbled upon a new species of stealthy, parasitic turtle ant that disguises itself as acrobat ants by mimicking their movements. The imposter ant—Cephalotes specularis or the “mirror turtle ant”—infiltrates foraging trails of its host to steal food and then quickly darts away. His discovery revealed new examples of how social parasites interact with their hosts. Meanwhile, his studies on army ants—the hyper-aggressive species that weave their bodies together to build structures like bridges—have served as models for small, swarming robots that may be used for tasks as varied as manufacturing and search-and rescue missions in the near future.

Powell and his team— his lab includes two postdoctoral researchers, three PhD candidates and two undergraduate research students—often spend six-to-eight weeks a year in the field, searching for ants among tropical tree limbs and forest leaves, usually in stiflingly hot conditions. Many of his students have been bitten by his ant-enthusiasm.

“I love ants,” said Jignasha Rana, a third year PhD student who has joined Powell’s fieldwork in Brazil. “I’m intrigued by the fantastic diversity of ants in the world. There are ants that are tiny, large, shiny, hairy; ants with sickle-like mouthparts, curvy spines and crazy spikes; and some with horns on their heads!”

Still, if there’s one ant most of Powell’s team would prefer to avoid, it’s the biting army ants. While evolution has seen turtle ants trade their stingers for armored plates, army ants clamp their sharp mandibles into the skin like ice tongs, and then stab their victims with a retractable stinger and shoot venom into the wound. (It clings so tightly into flesh that ancient peoples in South America are rumored to have used army ants to stitch wounds.) Their bite is “painful and unavoidable in this line of work,” Powell said. “It’s an ant-occupational-hazard.”

For the four-year, $300,000 NSF project, Powell and his students will spend weeks in the Florida Keys, first observing turtle ants racing through tree cavity networks, and then creating new route channels to understand how the ants adapt.

“Our goal is to see how ants respond to this environmental disruption and use that as a generalized theory for human networks” like humanitarian relief, traffic patterns or even computer connections, Powell said. “Anything that involves efficient delivery of resources through a network. If it’s something that can be disrupted and needs to be fixed fast, ants can show us how it’s done.”