New deep space observations by Columbian College’s Chryssa Kouveliotou and an international team of scientists provided insights into Gamma-ray bursts and their relations to supernova, the blindingly bright flashes from a dying star.
February 14, 2019 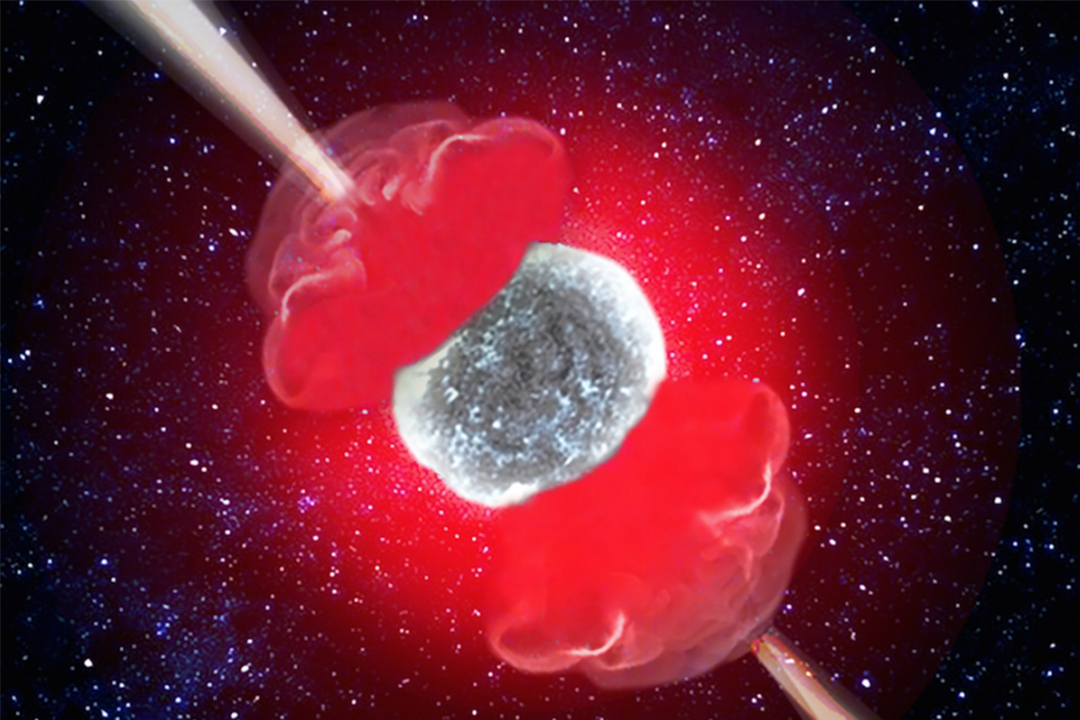 An artist representation of the hypernova. (Photo: Anna Serena Esposito)

Gamma-ray bursts (GRBs) are the most powerful explosions in the cosmos. They last several seconds and emit the same amount of light as nearly all the stars in the universe.

Such extreme amounts of energy can only be released during catastrophic events like the death of a very massive star, and also produce visible supernovae or hypernovae, the latter being five to 50 times more energetic than supernovae.

While the connection between GRBs and hypernovae has been well established, it is still unclear why some hypernovae do not have associated powerful explosions. Through the detailed observation of a rare nearby hypernova, Professor of Astrophysics Chryssa Kouveliotou and an international team of researchers discovered the missing link connecting hypernovae to GRBs in the form of a hot cocoon around the jets of matter expelled by the central engine as these spread through the outer layers of the progenitor star.

“With this recent event, we showed the jet provided a significant part of its energy to the cocoon, which allowed both the jet and the gamma rays to break out of the surface of the star,” Kouveliotou explained. “This was the first time we actually got to peek directly at the core of a collapsing massive star.”

The new discovery was announced in a recent study in the journal Nature. The international team was led by Luca Izzo, a researcher at the Institute of Astrophysics of Andalusia in Spain. Kouveliotou was one of two researchers on the team based in the United States.

In December 2017, the researchers discovered a long-duration GRB in a spiral galaxy about 500 million light-years from Earth, the fourth closest long-duration GRB ever observed. Since this GRB, labeled 171205A, was so close to Earth and detected so early, they were able to monitor the evolution of the source daily with the largest telescopes on the globe. This collaborative effort allowed researchers to capture an unprecedented level of information about the event in many different wavelengths over time.

Within the first days after the GRB detection, evidence of the presence of a hypernova was reported, but the findings were peculiar. Hypernovae are characterized by high expansion velocities on the order of 30,000 kilometers per second, but the hypernova the researchers observed—designated SN 2017iuk—had a much higher velocity, more than 100,000 kilometers per second in the first few hours after the explosion. A detailed analysis of the multi-wavelength emission observed in the very early days of SN 2017iuk led to surprising results.

The team observed a hot cocoon taking material from the interior of the star to the outer layers. After about three days, the hot cocoon faded away and the hypernova began behaving similarly to those observed previously. The researchers indicated the energy emitted by the cocoon in the earliest days of the hypernova was larger than that of the GRB, implying the jet deposited the bulk of its energy into the cocoon. These results demonstrate choked jets are indeed the reason some hypernovae do not seem to be associated with GRBs.

The researchers noted the findings have consequences for how supernova and hypernova explosion models are constructed in the future.