For many aspiring entertainers, visions of stardom can fade into struggles with homelessness and depression. Caroline Adegun, BA ’12, MA ’16, launched a nonprofit to support their work and their lives.
December 9, 2020 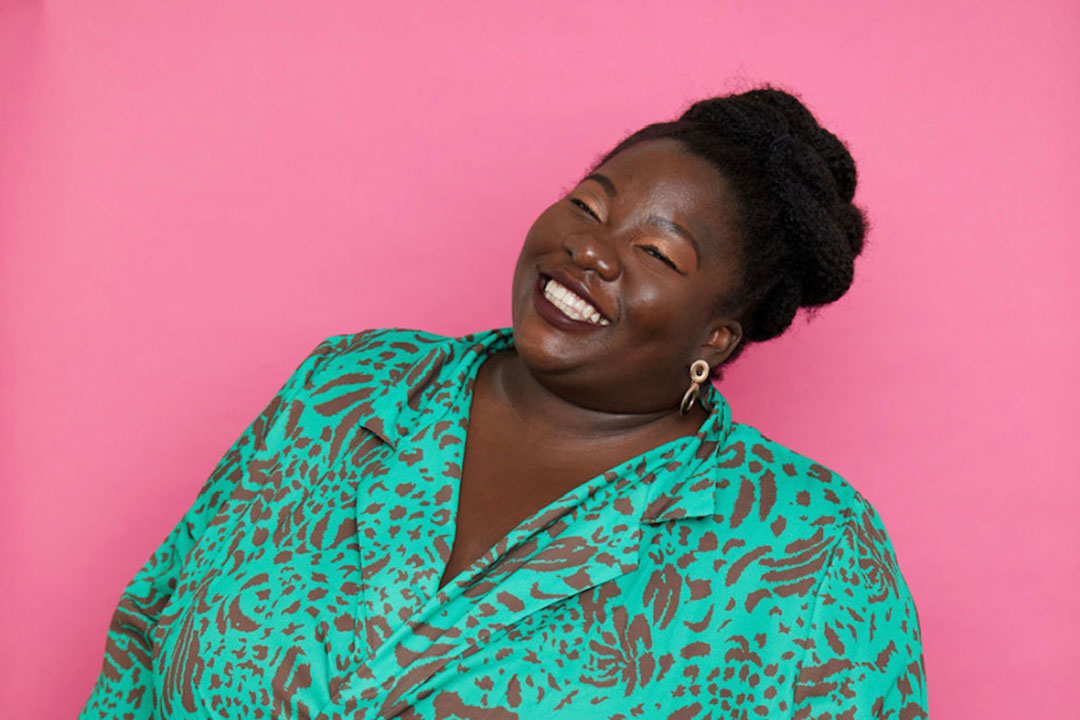 It’s a story out of a Hollywood movie: An aspiring actor leaves her hometown and follows her dreams to Los Angeles. She has little money but big ambitions, and the pluck and passion to see her name in lights.

Too often, however, that script doesn’t have a fairytale ending. No sooner do most fledgling entertainers step off the bus than their dreams derail. Instead of finding movie roles, they search in vain for affordable housing. Rather than paying for photoshoots and workshops, they scrounge for rent and food. With L.A. ranking behind only New York among homelessness rates in U.S. cities, many young artists end up living on the streets.

That’s a problem Caroline Adegun, BA ’12, MA ’16, wants to solve. The former psychology major is the founder of Hollywood Wingwoman Talent, a nonprofit talent development firm that guides low-income and homeless entertainers through the harsh realities of the creative industry. Adegun is helping artists find shelter, food and resources, while offering seminars to polish their professional skills.

“When your survival needs are not met, you cannot evolve in the other layers of your life,” Adegun said. “If you don’t know where you are going to sleep at night, you certainly can’t be thinking about taking an acting class.”

Adegun, who also owns a for-profit talent agency and is a plus-size model and fashion marketing content curator, is working with established performers, stylists and Hollywood professionals on volunteer forums that help artists refine their talents. Her virtual seminars cover topics from creating commercially viable products and personal branding to finances, leadership skills and emotional health and wellness. At the same time, she’s raising funds to open a temporary residence facility, dubbed “the Lion’s Den L.A.,” where homeless entertainers can find a safe haven as they launch their careers.

“I'm merging my background in psychology with my experience and passion in residential community living, holistic wellbeing and the entertainment business,” she said. “I want to help new entertainers succeed in their work and their lives.”

Adegun draws from her own challenges to empathize with the plight of entertainers. While working toward her master’s in education and human development and holding a full-time job in the GW Human Resource Management and Development Office, she experienced bouts of clinical depression. She left school for a business opportunity in Los Angeles, but returned to Foggy Bottom to complete her degree. “I apply to [Hollywood Wingwoman] the values and culture that GW taught me: the importance of community and of striving for excellence,” Adegun said.

After earning her degree, Adegun moved back to Hollywood. And while she enjoyed red carpet events and movie premieres, she was stunned by the stories she heard from distraught young performers. In 2018, she quit a well-paying human resources job to learn first-hand about the challenges artists faced. She traveled from hostel to hostel, living with homeless entertainers and talking to them about the pressures in their lives. “I was undercover, living in a hostel with 30 people and one bathroom,” she said. One after another, artists relayed tales of being taken advantage of by unscrupulous management. Some became so despondent they considered drastic measures like prostitution and suicide.

“They all said that they could turn their lives around if they could just find someone who invested in them and believed in them,” said Adegun, who credits her strong religious faith with fueling her commitment. “I wanted to be the voice that tells them to never give up.”

At Hollywood Wingwoman Talent, Adegun currently works with18 artists, mostly models, online content creators and social media influencers. Her nonprofit’s priorities focus on raising money for her first Lion’s Den L.A. house—she estimates the cost at $2 million—while she continues guiding her clients through personal and professional obstacles. “Success cannot be measured in a job or in a salary. It is when you're happy and at peace with where you are in life,” she said. “That’s the success I want for these people.”

Learn more about Adegun’s work and her fundraising efforts at The Hollywood Wingwoman website.