Carving up the Thanksgiving Story

In his new book, History’s David J. Silverman takes a close look at the traditional Thanksgiving story and the distortion of facts surrounding its legacy for Native Americans.
November 14, 2019 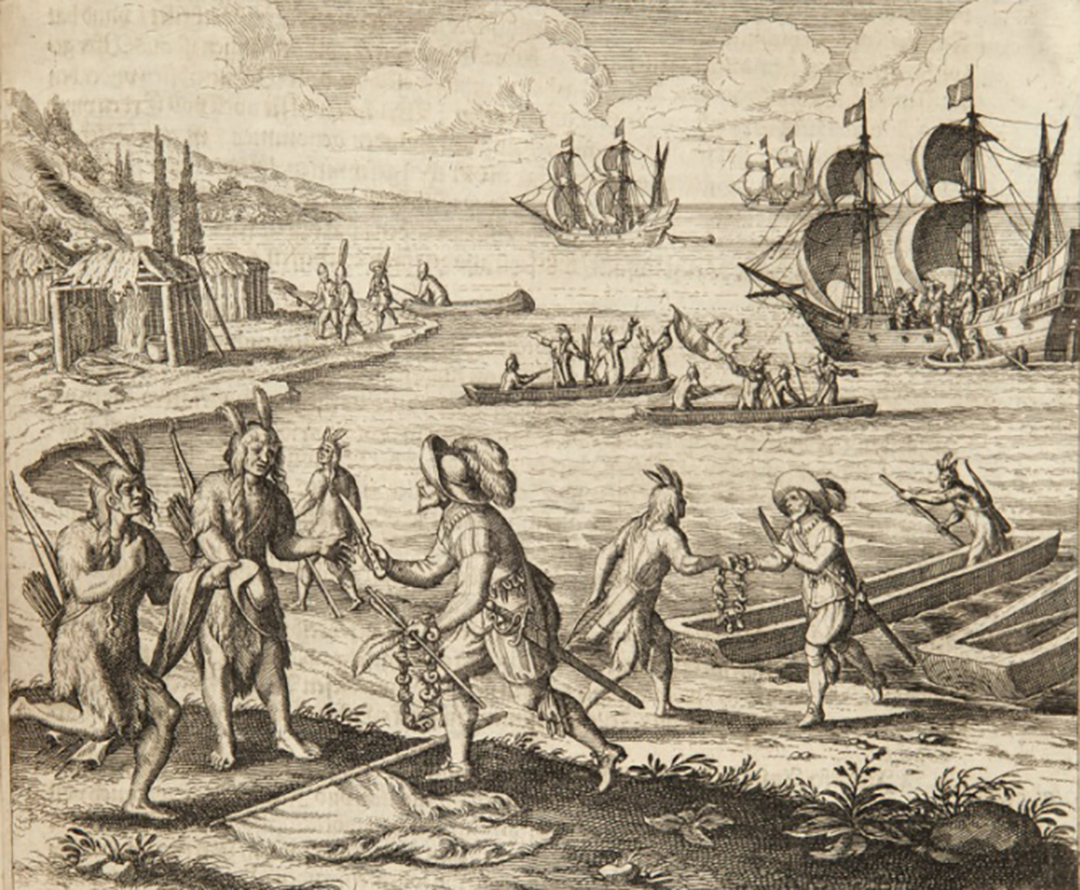 Most people know the traditional Thanksgiving story, a cheerful American tale handed down through grade school classes and outdated textbooks. It’s built on the image of welcoming Indians greeting benign Puritan colonists to 1621 Plymouth, Mass., and sealing their friendship with a feast.

Today, most people also realize that the story, at best, glosses over the plight of Native Americans. In his new book This Land Is Their Land: The Wampanoag Indians, Plymouth Colony, and the Troubled History of Thanksgiving (Bloomsbury Publishing, 2019), Professor of History David J. Silverman—an expert in Native American history and the author and editor of eight books on indigenous people and colonial America—deconstructs the facts around the Thanksgiving holiday. Working with American Indian communities and scholars, his research sheds new light on the fraught history of the Wampanoag and their uneasy alliance with the Pilgrims. As the 400th anniversary marking that harvest meal in the New World approaches, Silverman hopes his book sparks honest dialogue about America’s past.

“To me, a myth that treats American colonialism as a bloodless affair is more than bad history,” he said. “It is hurtful to both modern native people and to Americans generally because it doesn't allow us to understand ourselves in a critical way.”

In fact, Silverman noted, for the last 50 years, the Wampanoag Indians have marked Thanksgiving as a National Day of Mourning. Like many other Native Americans, they spend the holiday somberly reflecting on a history of genocide, the theft of their lands and the assault on their culture. At the Plimoth Plantation, a living history museum in Plymouth, some staff paint their faces black on Thanksgiving and perform traditional ceremonies to both honor their ancestors and remember a legacy of oppression.

“These men and women are hurt by the way we celebrate this national holiday,” Silverman said. “It makes them feel like second class citizens in their own country. The National Day of Mourning calls attention to the fact that white America's triumphs have been borne on native peoples’ backs.”

The Truth Behind the Tale

By 1621, the Plymouth Wampanoag, were in desperate straits. Much of their ranks had been decimated by an infectious disease, possibly smallpox, brought by Europeans. They faced threats of war from their rivals, the Narragansett. Wampanoag chief Ousamequin entered into a “mutual defense pact” with the Pilgrims, according to Silverman. The first Thanksgiving occurred when Ousamequin brought 90 men to the colonists’  harvest celebration. Wampanoag tradition holds that the Indians arrived at the camp in alarm after hearing the English firing guns during the festivities.


The mark of Ousamequin, the Wampanoag sachem (or chief) who greeted the Pilgrims, appears on a 1649 land deed for territory that is now the Massachusetts town of Bridgewater. (Courtesy Old Bridgewater Historical Society)

But the ensuing decades brought an influx of settlers, increasing tensions and leading to outbursts of violence between the native people and the Pilgrims. In 1637, settlers retaliated for a purportedly murdered Pilgrim by burning a Wampanoag village, killing 500 men, women and children. According to Silverman, the animosities culminated in King Philip’s War, the brutal 1675-76 conflict that resulted in colonists and their successors nearly wiping out the Wampanoag over the next two centuries. As the Thanksgiving story gained traction over time­—primarily among post-Civil War Northeasterners fearful of the arrival of European immigrants—Native American voices were largely silenced from history.

“The Thanksgiving myth brings native people into the story of our national origins, but then they disappear. The Pilgrims and their descendants carry on, but native people are just gone,” Silverman said. In his book, “I wanted to continue the Wampanoag story well after the 17th century into the present day so readers can see that native people never went anywhere. They’re still here.”

Silverman has told history through neglected voices throughout his career. Born in Massachusetts, he harbored a fascination with the colonial era. But rather than focus on the Founding Fathers, he saw it through the eyes of ordinary colonists like blacksmiths and farmers—“the people who were illiterate, who had mud on their boots and dirt under their fingernails,” he said.

Silverman’s research shift to Native Americans suited his enthusiasm for underrepresented stories. Few native people practiced formal literacy, he said, and rarely produced the kind of written documents historians typically rely on. Instead, the story of Native Americans was often told by the people with whom they interacted—fur traders, missionaries, military officers. “Most of the sources [of Native American history] are generated by outsiders,” he said. Those accounts, usually presented just a sliver of Indian life, often excluding women and children while “distorting what native people were thinking and saying and doing,” he said.

In the early 2000s, while canvassing Martha's Vineyard courthouses and historical societies during a rainy vacation trip, he uncovered a research jackpot: volumes of documents related to the Wampanoags, including land deeds, court dockets, estate inventories, town meeting minutes and more. Some were even written in the Wampanoag language. “Those kinds of records are rare and utterly invaluable,” he said. The material led to his first book on the Wampanoags in 2005.

While Silverman continues to mine the trove of primary sources, he also works with tribal elders and community leaders to help accurately frame Wampanoag history. “Doing this kind of work has exposed me to corners of my own country that I didn’t even know existed,” he said. He has even hosted a Wampanoag official in his undergraduate course on Native American history—a tribal council member who performed an ancestral honor song in his classroom. “For many students, the native perspective on American history is utterly revelatory,” Silverman said. “I’d like them to leave here realizing that the indigenous past is important and that indigenous people are essential to what it means to be an American.”