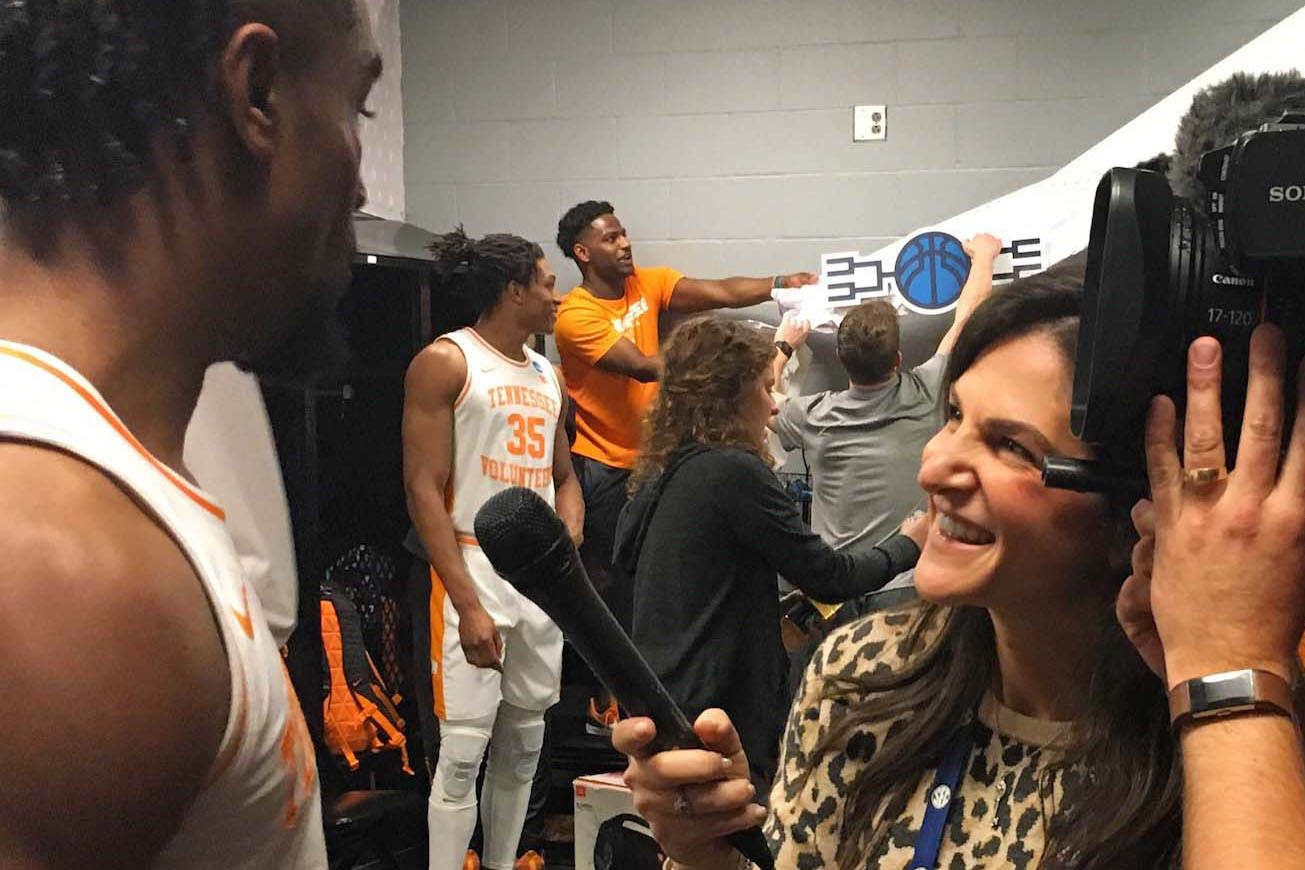 Alumna Danielle Santoro has covered some of the sporting world’s main events. She reported on the University of Tennessee’s men’s basketball team during the 2019 NCAA March Madness tournament.

As a journalism student at the George Washington University, Danielle Santoro, BA ’05, pictured herself one day reporting from the steps of the Capitol and the White House lawn.

A first-generation college student and scholarship recipient, Santoro threw herself into opportunities at the School of Media and Public Affairs (SMPA), part of the Columbian College of Arts and Sciences. She anchored student broadcasts, toured The Washington Post newsroom and interned at Good Morning America and Belo Broadcasting’s Capitol Bureau.

Today, Santoro is indeed reporting news—but not from the halls of Congress. Instead, she’s an Emmy-award winning senior producer at CBS Sports/CBS Sports Network. She has broadcasted from the floor of college basketball’s March Madness tournament, the tennis courts of the U.S. Open Championship and the finish line of the Kentucky Derby. And she’s made acclaimed documentaries on, among other subjects, the first female coach football at the United States Air Force Academy and Laila Ali’s emotional tribute to her father, legendary boxer and civil rights icon Muhammad Ali.

“I love my job and I feel so genuinely lucky to be doing this,” she said. “And I owe a lot of it to being at GW.”

Ironically, Santoro said she might never have attended GW if not for two major influences—a scholarship and her faculty mentor Steven Roberts, the J.B. and M.C. Shapiro Professor of Media and Public Affairs.

Santoro was a recipient of the GW Columbian College Endowed Scholarship, a fund established by contributions from alumni and friends of the university. Raised primarily by a single mother in New York City, Santoro said she could not have considered GW without the scholarship’s financial support.

Meanwhile, Roberts helped guide her on her career path. As she approached graduation, Santoro mulled two job offers—one from news giant CNN and another from the startup College Sports Television (CSTV). She was all-but-certain she would accept the CNN job. But Roberts offered some surprising advice.

“He told me that if I went to CNN, I would be at the bottom of the barrel, answering phones and getting coffee,” Santoro recalled. At the start-up, Roberts suggested, she would gain hands-on experience in reporting. She could always transition back to news, he said. Instead, she ended up carving out a career in sports journalism. “This was never the plan,” she said, “but I found an avenue that I really, really love, and I ran with it.”

As a high school student, Santoro’s heart was set on attending a sports powerhouse college. She visited GW as an afterthought on a tour of D.C.- area schools. “GW didn’t have a football team,” she laughed, “so it was not on my radar.”

But at an SMPA breakfast for prospective students, Santoro first met Roberts, who told her about the benefits of studying journalism in the nation’s capital with professors who reported for major media outlets. “He seemed to know my whole life story—I wasn’t just someone he was assigned to talk to,” she noted. By the time, she reached her car, Santoro told her mother she’d made her decision. “I wrote Steve a handwritten thank you note—and he wrote me back a handwritten note that said, ‘When you get to GW, come find me.’ And I did!”

In fact, Roberts became not just a professor who she credits with teaching her how to write a news story—“I still hear Steve saying, ‘Don’t start that sentence with I’ and ‘Can you give it more detail?’” she said—but also as a mentor and trusted friend who Santoro continues to consult for career and life advice. Roberts even helped her reconcile with her estranged father, encouraging her to reconnect with him and later write about it for a class assignment.

“A big part of my job is helping young people become grownups—and that’s really why Danielle and I bonded so closely,” Roberts said. “She was a wonderful student and did very well in my classes. But I think the most lasting thing between us wasn’t professional but personal, as a mentor.”

After leaving CSTV, Santoro joined a local Kentucky TV station, where she won a Kentucky Associated Press award and broke national news on the firing of the University of Kentucky’s head basketball coach in 2009. Most importantly, she said, she became the first female sports anchor in Louisville history.

“Little girls wrote me letters saying that because of me they were inspired to pursue different careers,” she said. “I like to think that if my story touches just one person, if one person is inspired by my work, I’m doing a good job.”

At CBS Sports, Santoro has reported from championships in several sports. But her favorite assignments involve telling personal stories of athletes and their families. For one award-winning feature, for example, she accompanied Laila Ali to her father’s Louisville childhood home and the gym where he first learned to box, before placing flowers on his gravesite. “When you tell a feature story, when someone opens their home to you, they leave a place in your heart,” she said. “I feel very fortunate that I get to meet all these amazing people and they trust me with their stories.”

Santoro’s schedule keeps her on the road for several days each month, depending on the sports calendar. But she’ll be home-bound for this season’s March Madness, one of her favorite events. She and her husband are expecting their first child in the spring—although she’s hoping her new daughter holds off until later in April. “Or I guess we’ll just have to celebrate her birthday at the Final Four every year!”