Video journalist Claritza Jiménez, BA ’05, often struggled to find diverse online images. Her newest venture is trying to solve that problem—in front of the camera and behind it.
June 9, 2021 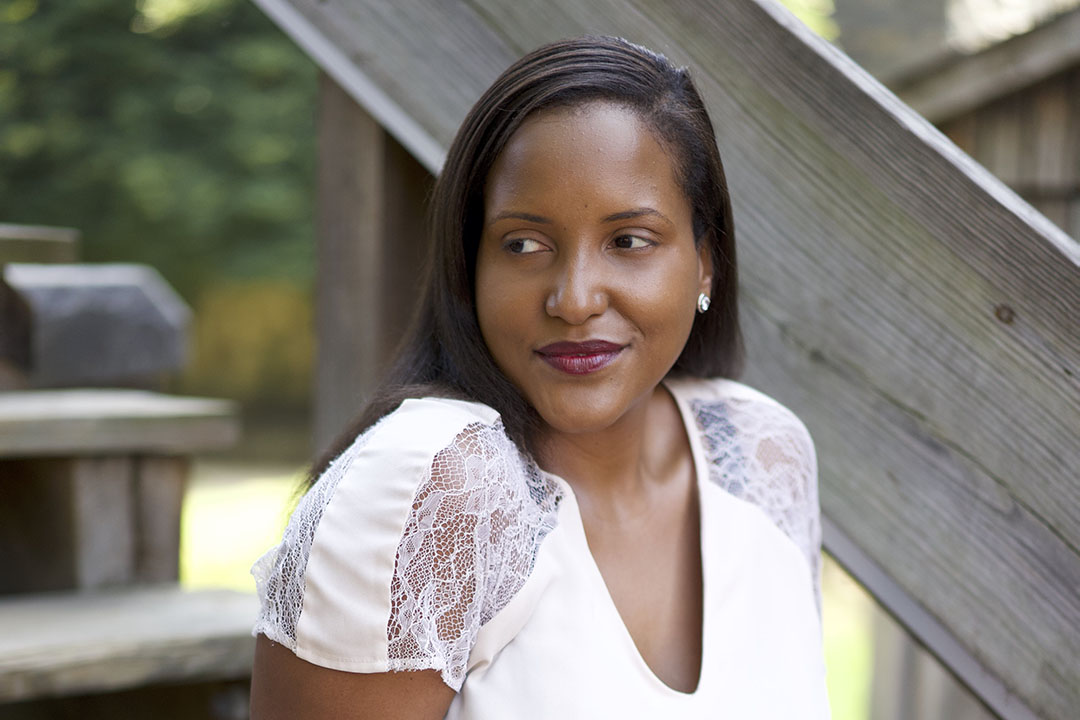 Google “Person in Office” and you’ll find page after page of businesspeople behind desks and conference tables. But what you are unlikely to see are many people of color featured prominently in your results.

That’s a frustration Claritza Jiménez, BA ’05, knows well. As a journalist and producer for media outlets like Politico and The Washington Post, the former political communication major in Columbian College’s School of Media and Public Affairs (SMPA) has worked across digital platforms for 15 years. But when she has needed to acquire stock images—licensed ready-to-use photographs that often include models in generic settings—her searches often revealed few diverse images. And those that she did find could seem overly choreographed with Black, Latino and other people of color inserted like props.

“I really have to dig deep to find authentic depictions of people of color that feel organic, not just like tokens,” said Jiménez, who is the managing producer at Politico Live and a member of the SMPA National Council. “I always thought this needed to be fixed.”

“We live in a visual culture where images of who is powerful, who is beautiful, who is successful and who is worth paying attention to shape reality,” she said. “So it is a big problem when Black and other people of color are left out.”

Throughout her journalism career, Jiménez has advocated for including diverse voices in her storytelling. At The Post, she was part of a reporting team that earned an Emmy-nomination for a series charting the legacy of the Obama White House. She produced a mini-documentary that focused on three generations of an African-American family who own a D.C. flower shop and have witnessed several American presidents from their U Street neighborhood. Among her accomplishments at Politico Live, Jiménez conceived and produced a virtual town hall series on racial inequality amid the backdrop of this summer’s protests against racial injustice.

Jiménez was 10 when she immigrated to Miami from the Dominican Republic with her mother and sister. Her earliest exposure to journalism was the Univision and Telemundo broadcasts that served as the main news source for her community. “These outlets were invisible to most of America, but not to Latino families like mine,” she said. “We relied on them for figuring out how this new country worked.” As a child, Jiménez took notes on the Spanish-language anchors and performed her own newscasts to her mother and aunt. “That’s when the journalism bug hit me,” she said.

At GW, Jiménez served as president of the university’s chapter of the Society of Professional Journalists, was a member of the GW Women’s Leadership Program and was initiated as a member of Alpha Kappa Alpha Sorority, Inc. She also held internships at several major broadcast networks. Finding herself one of the few people of color in many newsrooms, she first became aware of a dearth of diversity both in front of the camera and behind it. “I didn’t see Blacks, Latinos and other people of color as producers or directors or anchors,” she recalled.

As a media veteran, Jiménez said she doesn’t underestimate the importance of prominently featuring people of color in stock imagery—particularly with the proliferation of social media and online digital content. “If we don’t see an image of a woman of color at a lab using a microscope or a woman of color working in an office, we are presenting the impression that they don’t exist,” she said.

This summer, while balancing COVID restrictions and a whirlwind news cycle, Jiménez finalized her InColorStock blueprint as she earned her MBA at the University of Virginia Darden School of Business. Rather than simply adding diverse faces to standard images, her plan calls for creating culturally specific content. She’s on pace to contract with 100 photographers and videographers from racially and ethnically diverse backgrounds to capture accurate portrayals of people of color in realistic settings. In a recent photoshoot of a golf outing, for example, her team included a diverse crew of content creators and models, including real-life Black golfers.

“If you’re going to have a group of Black golfers at a golf course, there’s a certain dynamic in the way they interact that you cannot fake by just putting a Black person in the middle of a bunch of white golfers and calling it diversity,” she noted.

Even as she continues her journalism work while she builds InColorStock, Jiménez is hoping she can inspire other first-time entrepreneurs to pursue their own business ventures. “I think we are conditioned to believe that you are only an entrepreneur when your company is making millions of dollars or your face is on the cover of the magazine,” she said. “But once you get that idea and put it out into the market, you are an entrepreneur already.”